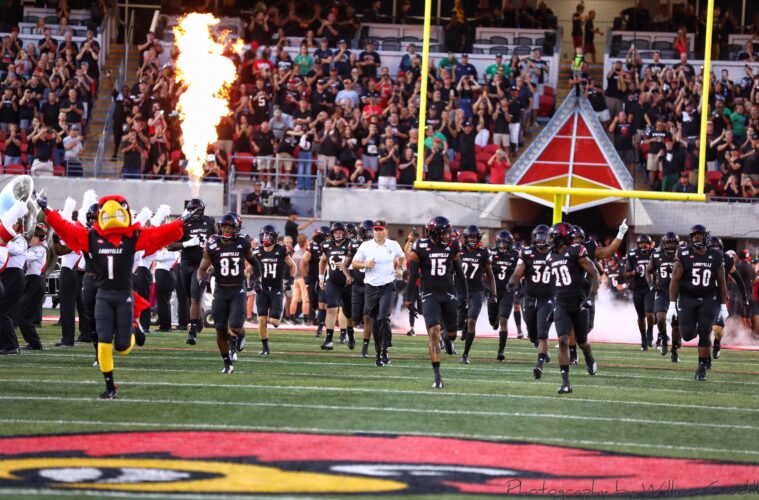 The University of Louisville 12-game football schedule for the 2022 season was released today by the Atlantic Coast Conference.

The 2022 slate opens with a pair of road contests, including the ACC opener on Sept. 3 versus Syracuse in the Carrier Dome. The Cardinals have won the last three encounters versus the Orange after last season’s 41-3 win at Cardinal Stadium. Louisville hits the road for the second-straight week to face UCF in Orlando on Sept. 10. UofL intercepted pass in the final moments to defeat the Knights 42-35 last year in Louisville.

The home schedule opens on Friday, Sept. 16 when the Cardinals host Florida State. It will be the first home opener on a Friday since 1960. The Cardinals will remain home to face former Conference USA and BIG EAST rival USF on Sept. 24.

Louisville remains in ACC play with a pair of road contests at Boston College (Oct. 1) and at Virginia (Oct. 8). The Cardinals defeated the Eagles 28-14 last season at home and fell to the Cavaliers 34-33 in the final moments at Cardinal Stadium.

Louisville welcomes James Madison to Cardinal Stadium for the first meeting between the two schools on Nov. 5. The Dukes fell to North Dakota State 20-14 in the FCS Semifinals a year ago.

The Cardinals return to ACC action on Nov. 12 when it travels to Death Valley on Nov. 12 before wrapping up the home season and league play on Nov. 19 versus NC State.

The regular season concludes with a short trip up I-64 to face Kentucky at Kroger Field.

The Cardinals return 18 starters from a year ago after finishing 6-7 last season following a loss to Air Force in the First Responder Bowl.