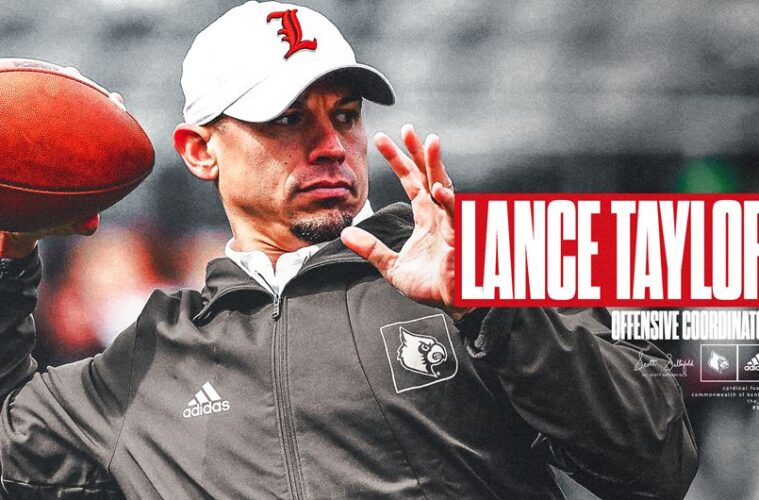 “When looking for an offensive coach, I wanted an outstanding teacher and communicator, and Lance brings that to our staff,” Satterfield said. “Lance possesses all the qualities I look for when hiring an offensive coordinator. His experience and knowledge allows me to oversee all aspects of our program and brings a wealth of ideas to our offensive staff. He will be a perfect fit with what we are trying to do offensively and I’m just excited we were able to hire a coach with this kind of pedigree and respect.”

Prior to joining Satterfield’s staff, Taylor spent the last three seasons as the running backs coach and run game coordinator at Notre Dame, guiding the Fighting Irish to a College Football Playoff appearance in 2020 and a New Year’s Six Fiesta Bowl appearance in 2021.

During those three seasons with the Irish, Taylor guided running back Kyren Williams to a pair of 1,000-yard seasons in 2020 and 2021. Williams rushed for 1,002 yards and 14 touchdowns last season. As a redshirt freshman in 2020, Williams produced 1,125 yards and 13 scores to earn Freshman All-American accolades and was a finalist for Freshman of the Year.

Prior to his time at Notre Dame, Taylor spent the 2017-2018 seasons as the wide receivers coach with the Carolina Panthers. Before his stint in the NFL, Taylor was the running backs Coach at Stanford for three seasons from 2014-16, where he began to make a name for himself.

In 2018, Taylor oversaw the development of both rookie D.J. Moore and second-year receiver Curtis Samuel, who Taylor drafted in the 2nd round of the 2017 NFL Draft. The tandem registered 94 catches for 1,282 yards and seven touchdowns. Moore’s 788 yards and 55 catches ranked second and fourth, respectively, among NFL rookie wideouts.

While with the Cardinal, Taylor, who was named the 2015 FootballScoop.com Running Backs Coach of the Year, played a key role in the development of 2015 Heisman Trophy runner-up Christian McCaffrey.

The Stanford running back set the school record for single-game rushing yards (243) against UCLA and became the first Cardinal to eclipse the 2,000-yard rushing mark in a season (2,019). McCaffrey, who was second among all FBS running backs in rushing yards, registered 11 100-yard rushing games, including a school-record nine straight.

Under Taylor’s tutelage, McCaffrey earned Associated Press Player of the Year honors in 2015. Taylor also guided McCaffrey to team-best 45 receptions, 645 receiving yards and five receiving touchdowns. McCaffrey was the only FBS player to lead his team in both rushing and receiving yards in 2015.

Stanford set a school record in 2015 in rushing yards (3,132) under Taylor, and two of the other 13 best rushing seasons in Stanford history came under his guidance.

Two of Taylor’s disciples — McCaffrey and Love — hold three of the top five rushing seasons in Stanford history, and each of the four highest single-game rushing totals.

McCaffrey ultimately was chosen with the eighth pick of the 2017 NFL Draft by the Carolina Panthers.

Taylor came to Stanford from the Panthers, where he spent the 2013 season as an assistant wide receivers coach.

Prior to his time at Carolina in 2013, Taylor spent three seasons with the New York Jets from 2010-12, serving as a coaching intern in 2010, offensive quality control coach in 2011 and assistant tight ends/quality control coach in 2012. During Taylor’s time with the Jets, tight ends, Jeff Cumberland (29) and Dustin Keller (28) ranked second and third on the team, respectively, in receptions.

Before his stint in the NFL, Taylor coached wide receivers at Appalachian State in 2009. Under his tutelage, the Mountaineers set school records with 284 receptions and 3,621 receiving yards. The team finished 11-3, won the Southern Conference title and advanced to the Football Championship Subdivision semifinals.

He began his coaching career as a graduate assistant for Nick Saban at his alma mater, Alabama, from 2007-08.

A walk-on at Alabama before earning a scholarship, Taylor played in 38 consecutive games at wide receiver from 1999-2003 for the Crimson Tide. As a senior, he served as a special teams captain for (then) coach Mike Shula.

Taylor played professionally for the Colorado Crush and Columbus Destroyers of the Arena Football League, and af2’s Green Bay Blizzard and Louisville Fire from 2004-06.