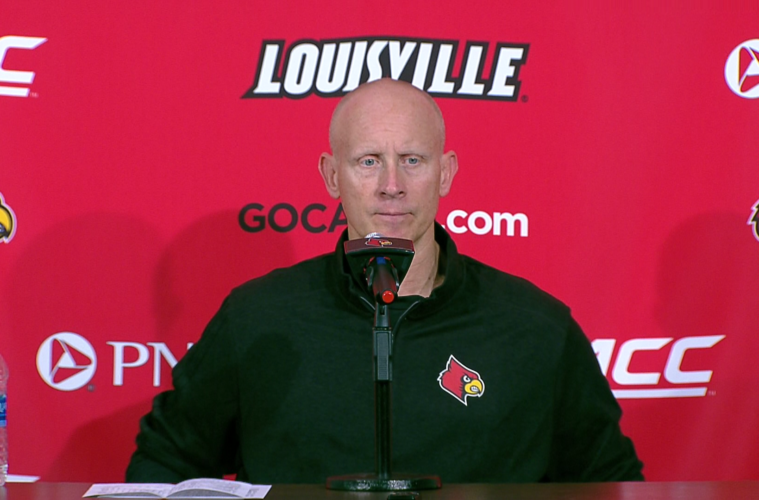 “Coaching transitions are always difficult, especially during the course of the season, but Chris and I agreed that it is in the best interests of our student-athletes that he step aside immediately,” said Heird. “We will always prioritize our student-athletes and do all that we can to ensure that they have an incredible experience at Louisville. I want to thank Chris and his family for their service to the University and we wish them the very best in their next chapter.”

“To wake up every day these last four years as the head coach of the University of Louisville has been an opportunity that I will cherish,” said Mack.  “Over the past 50 years, this position has been among the most coveted in all of college sports and I count myself lucky to have been a part of this university’s storied history.

“It is with that sense of appreciation that I have made the decision to no longer be your coach.  I know that I will miss the daily interactions with our student-athletes, coaches and my university colleagues, but after 25 years of coaching, including the last 13 as a head coach, it is time for me to focus on my family and spend more time being a dad.  I don’t know what my future holds, but I do know that I take away from here only the cherished memories and friends we have made in this community and this university.

“Any of us who is given the opportunity to represent this great university knows that we are only in this position because of the passion, support and pride of Cardinal Nation, and I know that the University of Louisville basketball program’s best days remain ahead of it.  Coach Pegues is ready to lead this program through the home stretch of the season, and I encourage everyone to pack the KFC Yum! Center to show our players how much the Louisville community cares about Cardinal Basketball.

“With all of our hearts, my family and I thank you for your passion and support and wish Cardinal Nation and the University of Louisville nothing but the best moving forward. Go Cards!”

Pegues (pronounced puh-GEESE) is in his fourth year at UofL after working six seasons at Xavier (2012-18).  Before his time at Xavier, Pegues spent two seasons as an assistant coach at his alma mater, the University of Delaware.  Pegues had a stellar collegiate career at Delaware, where he earned a degree in communications in 2000. The all-time leading scorer in Delaware men’s basketball history with 2,030 points, Pegues led the Blue Hens to two NCAA Tournament appearances from 1996-2000.  A native of Washington, D.C., Pegues played professionally in Italy, New Zealand, England and Argentina, as well as one season in the Continental Basketball Association. He guided the Cardinals to a 5-1 record in the first six games of this season while serving as acting head coach.

“I have complete confidence in Mike Pegues, who did a tremendous job leading the team in November and I am comforted that he has agreed to lead us the rest of the season,” said Heird. “We have set a high bar for expectations for our basketball program, on and off of the court, and we will continue to strive to meet those goals. We have world-class student-athletes, academics, facilities, tradition and fan support, and I am confident that we will be able to find the right new leader of our cherished men’s basketball program. As we conduct a deliberate and targeted search, our focus will continue to be on our student-athletes and I am confident that Cardinal Nation will rally around them.”