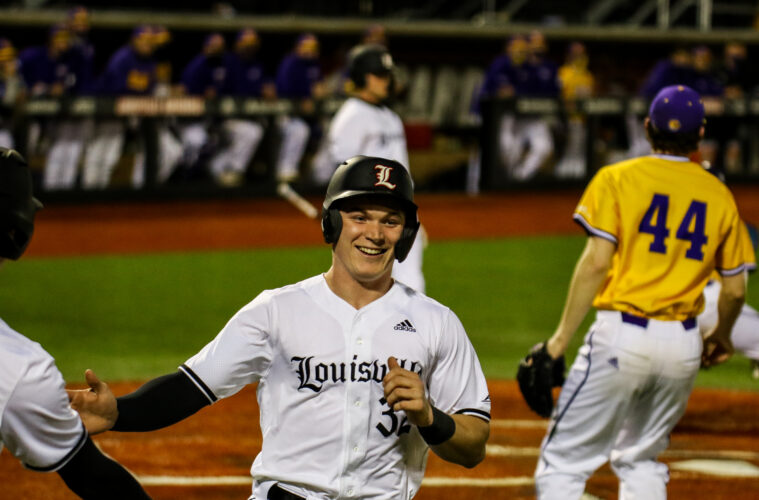 Louisville Bounces Back To Sweep Saturday Games Against Western Illinois

LOUISVILLE, Ky. – One day after suffering its first loss, the second-ranked University of Louisville baseball team swept a doubleheader against Western Illinois on Saturday in Jim Patterson Stadium.

Michael Kirian took the ball in the opening game in his first start since the 2018 season and took care of business. The southpaw delivered four scoreless frames, allowing just three hits to earn his first victory of the season.

Adam Elliott followed with four innings of his own on the mound, allowing only an unearned run with three strikeouts. Jack Perkins then finished things off in the ninth for his first save of the year.

The Cardinals started the scoring in the second inning with Cooper Bowman driving home a run on a sacrifice fly. UofL then extended the lead on a balk that brought Christian Knapczyk home in the fifth.

Lucas Dunn launched his first long ball of the season in the sixth and then doubled home the game’s final run in the eighth to punctuate the victory. Dunn was 3-for-4 in the opening game with a pair of RBIs.

The Louisville offense hit its stride in the second half of the doubleheader. Cameron Masterman started the scoring with a RBI groundout in the second before the Cardinals pushed five across the plate in the third.

Alex Binelas tucked a ball inside the first base bag to drive home two and Henry Davis lined a single to right for a two-run knock of his own. Levi Usher scored later in the inning with the help of a Western Illinois (1-2) error.

Luke Smith (2-0) worked five innings on the mound, giving up just one run on five hits. Kaleb Corbett was lights out coming out of the bullpen, striking out seven while pitching the final 3.1 innings of the night. Corbett entered with the bases loaded in the sixth and got a quick flyout before retiring the next seven men he faced.

Louisville is back in action on Tuesday for a midweek contest against Morehead State. First pitch is scheduled for 3 p.m. at Jim Patterson Stadium.