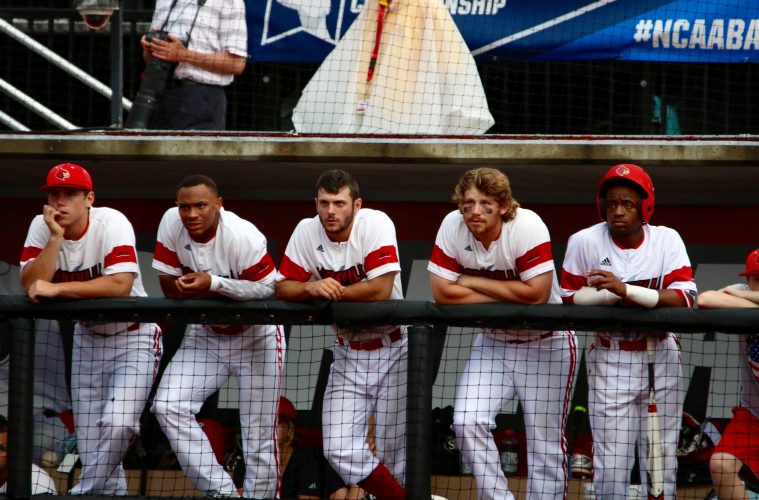 The Louisville Baseball team completed a Regional sweep last weekend of Western Michigan, Ohio State, and Wright State at Jim Patterson Stadium.  The Cards are 36-1 this season in games at Jim Patterson Stadium and that record will be put to the test when the University of California-Santa Barbara Gauchos come to town with their 40-18-1 record.

The NCAA released Louisville’s schedule as Saturday, Sunday, Monday for this weekend vs. UC-Santa Barbara.  Louisville’s Game 1 & Game 2 will be played at NOON.  Game 1 will be broadcast on ESPN2 with Game 2 on ESPN2 or ESPNU.  Details for a Game 3 on Monday will be determined if the game is necessary.

The Gauchos were able to win the Nashville Regional without playing #1 seeded Vanderbilt.  UC-Santa Barbara knocked off Washington in Game 1 and then took down #4 seeded Xavier in back-to-back contests.

Both UC-Santa Barbara and Louisville come into this weekend’s Super Regional play having faced very little test in the Regional round.  Last year the Cards hosted another west coast team in the Super Regional round when Cal State Fullerton was able to complete the comeback and knock off UofL 2-1 in dramatic fashion to advance to the College World Series in Omaha.

The Road to Omaha for the No. 2 national seed Louisville baseball team will continue Saturday at noon ET against UC Santa Barbara in game one of the 2016 NCAA Super Regional at Jim Patterson Stadium.

Saturday’s Louisville Super Regional opener between the Cardinals (50-12) and Gauchos (40-18-1) will be televised on ESPN2, while game two of the best-of-three series is set for Sunday atnoon on either ESPN2 or ESPNU. If necessary, the deciding third game is scheduled for Monday (ESPN2 or ESPNU) with the time to be determined following Sunday’s games. The victorious team at the Louisville Super Regional will advance to the College World Series in Omaha, Nebraska.

All-session tickets for the Louisville Super Regional are on sale and can be purchased online at GoCards.com, or through the Louisville Cardinals Ticket Office. All-session tickets for the Super Regional are $25 for general admission and outfield berm seating and $15 for college students.  A limited number of chairback seats have been returned from the visiting team allotment and will be available online starting at 9 a.m. ET on Wednesday, June 8.

Single-session tickets will go on sale on Thursday, June 9 at 9 a.m. ET. Tickets may be purchased online at GoCards.com or at the Louisville Cardinals Ticket Office located at Gate 2 of Papa John’s Cardinal Stadium. Remaining tickets will also be available at the Jim Patterson Stadium ticket windows beginning at 9 a.m. ET on Saturday and Sunday. Single-session tickets for the Super Regional are $20 for reserved chairback seats, $10 for general admission and outfield berm and $5 for college students.

The Cardinals clinched their fourth consecutive NCAA Super Regional berth, including the third straight at Patterson Stadium, by winning the Louisville Regional last weekend. Extending the nation’s longest active NCAA Regional winning streak to 12 games, Louisville swept through the double elimination Regional with a 6-1 win over Western Michigan, a 15-3 victory over No. 20 Ohio State and a 3-1 triumph against Wright State.

The Gauchos earned their first NCAA Super Regional berth by sweeping the Nashville Regional capped by Monday’s 14-5 win over Xavier. UC Santa Barbara opened the weekend with a 3-2 win in 14 innings against Washington on Friday and defeated Xavier 5-4 in Sunday’s winner’s bracket game before Monday’s clincher. UCSB finished third in the Big West Conference with a 13-11 league record this season.

With Sunday’s Regional clinching win, their 22nd consecutive at home, the Cardinals locked up their sixth NCAA Super Regional berth and fourth 50-win season in the last 10 years. Having already set a school record for home wins in a season, Louisville improved to 36-1 at Patterson Stadium this season and 22-6 all-time in NCAA postseason games at the corner of Third and Central.