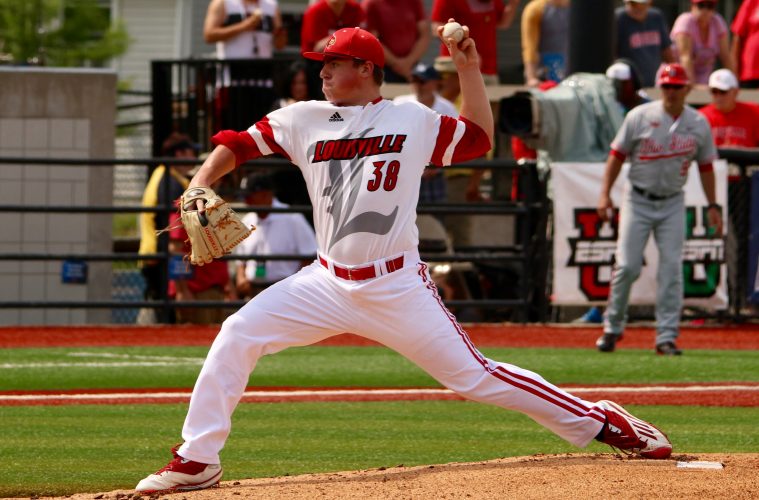 Danny Rosenbaum connected for a pair of two-run homers and Brendan McKay had 10 strikeouts to lead the No. 2 national seed Louisville baseball team in a 15-3 win over Ohio State in Saturday’s NCAA Regional winners bracket game at Jim Patterson Stadium.

With their 21st consecutive win at home, the Cardinals (49-12) advance to the championship round of an NCAA Regional for the fifth straight season and the seventh time in the last eight years. Ohio State (44-19-1) will face Wright State (45-16) in an elimination gameon Sunday at noon ET and the winner will meet Louisville at 4 p.m.

A senior from Lafayette Hill, Pennsylvania, Rosenbaum finished 2-for-4 with four RBI and his first career two-homer game, while McKay helped his own cause going 2-for-4 with a home run and three RBI. Sophomore Devin Hairston had two doubles and scored two runs on a 3-for-5 day at the plate and junior Logan Taylor was 3-for-5 with a double and scored twice for the Cardinals, who registered their highest scoring performance in an NCAA postseason game since a 20-2 NCAA Super Regional win over Oklahoma State on June 10, 2007.

Sophomore Blake Tiberi had two hits, including a double, with one RBI and two runs scored, junior Will Smith chipped in going 2-for-3 with a double and two RBI and junior Nick Solak doubled and scored twice as Louisville matched a season with six doubles overall. The Cardinals finished with a 19-6 edge in hits over the Buckeyes, including a season-high 10 extra-base hits.

On the mound, McKay allowed just three hits and issued three free passes without allowing a run in 5.2 innings to earn the win and improve to 12-3 on the season. The 10 strikeouts for the sophomore from Darlington, Pennsylvania, equaled the school record for strikeouts in an NCAA postseason game matching the total by Kyle Funkhouser against Kent State on May 30, 2014.

Including Saturday’s outing, McKay has 119 strikeouts this season, the fourth highest single season total in school history. In 16 collegiate starts at Jim Patterson Stadium, McKay is now 15-0 with a 1.34 ERA and 128 strikeouts in 107.0 innings at his home ballpark.

The Cardinals started fast on Saturday scoring a pair of runs in the first inning on a two-run homer by McKay. After Solak coaxed a two-out walk from Ohio State lefty John Havird, McKay launched a 1-2 pitch off the scoreboard in right center for his fifth home run of the season.

Following a scoreless second, Louisville put the game away with scoring eight runs on eight hits in the third inning, the sixth time this season they have plated eight or more runs in a single inning. The first six batters of the inning reached base and scored, starting with a RBI single by McKay to plate Smith and a RBI double from Hairston to score Solak. Following a RBI double by Tiberi, Rosenbaum crushed a 1-2 pitch for his first two-run homer of the game.

An inning later, Rosenbaum added to the lead when he followed a single from Tiberi by sending the first pitch of his at-bat against Austin Woodby over the wall in left center for his second home run of the day and the 15th of his collegiate career. Louisville plated a third run in the fourth on a RBI double by Smith to score Taylor before junior Colin Lyman drove Hairston home with a RBI groundout in the fifth.

The Buckeyes found the scoring column in the eighth inning on Saturday when pinch hitter Daulton Mosbarger hit a two-run homer. The Cardinals plated their final run of the day in the bottom of the eighth on a RBI groundout by freshman Zeke Pinkham, while Ohio State’s final tally was plated on a RBI single from Mosbarger.

Saturday’s game included a 10-minute weather delay in the bottom of the third inning and a 51-minute delay in the top of the sixth inning.