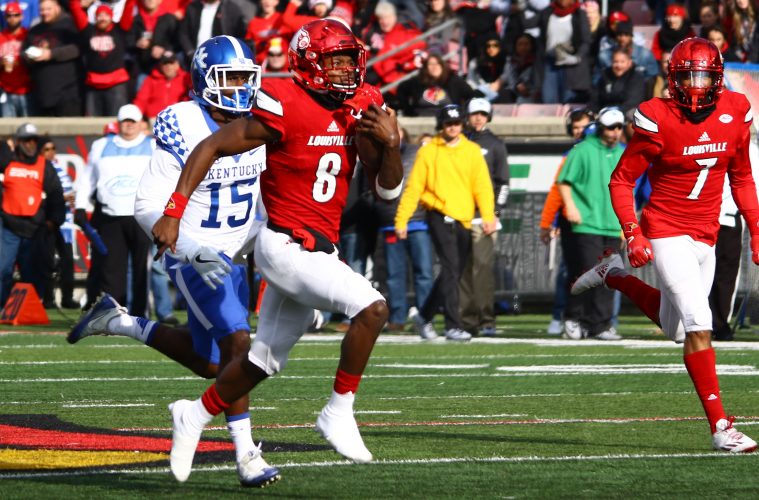 University of Louisville quarterback Lamar Jackson was named on Monday evening one of five finalists for the 2016 Heisman Trophy.

The Heisman Trophy recipient will be announced from the PlayStation Theatre in New York City on ESPN on Saturday during a program that begins at 8 p.m. ET. Jackson will be joined by Oklahoma’s Baker Mayfield, Michigan’s Jabrill Peppers, Clemson’s Deshaun Watson, and Oklahoma’s Dede Westbrook.

The school’s first finalist for the award, Jackson guided the Cardinals to a 9-3 record and put together one of the best seasons by a collegiate quarterback. He became the only player in FBS history to throw for over 3,300 yards and rush for 1,500 yards in a season.

“I’m extremely humbled and honored to be a Heisman Trophy finalist,” Jackson said. “This is a great honor for me, but it’s an honor that goes to my teammates too. Without them, I wouldn’t have been able to be successful and I share this accomplishment with them. It’s a great honor and I’m excited, but I’m looking forward to preparing for the Citrus Bowl against LSU.”

The Pompano Beach, Fla., native set the ACC record by accounting for 51 combined touchdowns (rushing and passing), which is second-best nationally, and ranks second in the nation in total offense at 410.7 yards per game. He also broke the conference record for rushing yards and rushing touchdowns (21) by a quarterback in addition to rewriting the school’s single-season rushing record with 1,538 yards.

“I am very pleased for Lamar Jackson, our program and the University of Louisville,” UofL head coach Bobby Petrino said. “The effect Lamar has had on our program is unparalleled. He is a great competitor who has used his abilities and strengths to become the best player in the nation, in my opinion.”

Voted one of the team’s captains, Jackson has passed for 3,390 yards and 30 touchdowns and is two scores shy of breaking Teddy Bridgewater’s single-season mark for touchdown passes in a season. Jackson totaled a pair of 400-yard passing games this year, including a career-best 417 yards in a win on the road at Marshall (Sept. 24) and 411 yards in a victory at Syracuse (Sept. 9).

“A year ago, he was put into the first game of the season and since then his attitude and preparation have allowed him to continue to grow and mature into a dynamic playmaker and a confident leader,” Petrino said. “This season, he stands apart and I congratulate him on the work he has done to become a Heisman Trophy finalist.”

He amassed an ACC single-game record of 610 total yards in the win over Syracuse, a game in which he came within one rushing yard of becoming the first player in FBS history to run for 400 yards and pass for 200 yards in the same game.

Jackson, who is 14-5 in his career as a starter, is the school’s first ACC Player of the Year. During the season, he was named the Walter Camp Offensive Player of the Week on three occasions and also honored three times as the ACC Offensive Back of the Week.

The Cardinals will take on LSU on Dec. 31 in the Buffalo Wild Wings Citrus Bowl on ABC in Orlando, Fla., at 11 a.m. ET.