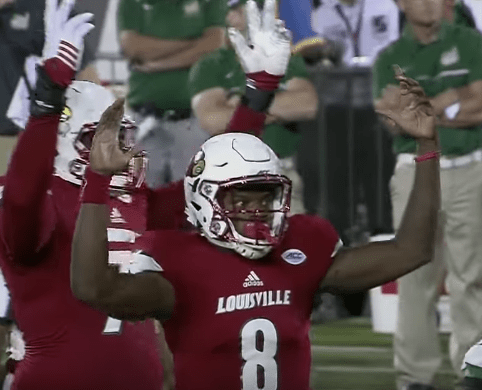 Lamar Jackson is a Mutant

“Allow me to reintroduce myself.” – Jay Z

After reviewing the Louisville v. Charlotte game on noonkick.com today, I’m certain that Lamar Jackson was gifted to the ‘Cards by Professor Charles Xavier. Perhaps the paraplegic brain trust of the X-men wanted to see what his powers would be like on a football field if his legs still functioned.  Hyperbole aside, it appears that Lamar Jackson is the second coming of Michael Vick, but with better throwing accuracy.  Louisville fans should rejoice and pack that stadium down by the bridge every week for the next two years because the world may never see another player like him in a long time, if ever.

In today’s arms race that is college football, Lamar Jackson is a one-man arsenal. While he comes with a rocket launcher attached to his right shoulder, the most deadly weapon in Jackson’s armory is his mutantesque change of direction ability.

People like to talk about “footwork” and make cute videos of running through ladders and around cones barefooted in the sand.  That’s cool and all, but change of direction ability starts with a football player’s most important body part, his eyes. We are visual creatures so this shouldn’t be a surprise to you. Ball carriers must be able to see angles and diagnose them rapidly in order to negotiate finely tuned 240-pound linebackers hell bent on snapping their bones, ligaments, and cartilage all in the name of the prized NFL signing bonus.

The mind captures the destructive forces of the universe through the eyes then sounds the claxons that alert the hips to steer clear of the rocks.  Once the angles are diagnosed, the body can react accordingly, in order to evade contact or at the least mitigate the force of impact.  It’s not necessarily footwork, but quick twitch hip movement connected to vision, that allows for elite change of direction, allowing for proper deceleration and acceleration in and out of the cuts.  In order to change direction without compromising speed, the hips must swivel while the legs churn.  Often, we hear the term “drop the hips” when discussing getting in and out of cuts.  But the better expression is “syncing the hips.”  That’s syncing not to be confused with “sinking.”

Try this, stand straight up and quickly turn to the left or the right with your feet facing forward, see how your hips and upper body dip down slightly?  The hips are your center of gravity, they are the last thing to go when you change directions because your body is built to swivel in your hip sockets.  Our hips tend to dip naturally when we make a sudden change of direction.  That’s where the incorrect terminology “sinking” comes from.

While footwork is important, the feet will not fool most defenders that play power 5 football.  Kids have been coached since Pop-Warner and peewee ball to watch the ball carriers hips in order to not be fooled by head fakes or stutter steps. What makes Lamar Jackson so dangerous as a ball carrier are his deceptive hips, when he cuts, his hips move his entire body latterly via subtle jump steps and hard plants, as if he is teleporting away from defenders.  Sure his feet play a part in this process,  but he doesn’t waste time taking a series of rapid choppy steps, that’s for wide receiver’s trying to sell routes off the line and getting off the press, but when it comes to carrying the rock, a hard plant and a quick hip shift is the recipe for success and highlight video glory.

All of this was on full display Thursday against Charlotte in many instances but I have identified two plays that really displayed his mutant like change of direction. On one of these plays, a Charlotte blitzer came free up the B gap on a pass play with about a minute left in the first quarter. The announcer commented the blitzer came free in the backfield with the demeanor of  a blind dog in a meat market, and that he had to “breakdown” in order to slow Jackson’s escape. While I appreciate the prose, his take is incorrect.

When a player “breaks down,” he comes to a stop.  This allows a ball carrier to hit him with a jump step and accelerate right by him or deliver a hard shoulder at full speed while the defender is on his heals, like a truck hitting a parked car.  The correct thing for a defender to do on a free run at the QB in the pocket, is identify the quarterback’s outside shoulder, sync his hips in relation to that, and get his inside shoulder and helmet across the defender and hopefully into the arm the ball is being held.

Let’s say the blind dog in the meat market did the things I listed above and took a proper up-field angle. At best the defender would have smacked Lamar at full speed and gotten a sack and a forced fumble, at worst he would have forced Lamar back inside the pocket.  On the play being discussed, the linebacker correctly targeted Lamar’s outside shoulder, forcing him to run up into the pocket, it wasn’t his fault none of the down lineman weren’t home to contain #8.

This video I made shows what I’m talking about:

The first run in the video shows the blind dog fly into the meat market.  But instead of breaking down, as incorrectly suggested, “blind dog” actually shows good vision and takes a proper upfield angle.  By targeting Jackson’s upfield shoulder, the free blitzer takes away Jackson’s escape to the outside, forcing him to step up in the pocket.  Unfortunately for Charlotte, their defensive tackles failed to maintain lane discipline and weren’t in position to hit Jackson, whose first encounter with a ‘Niner defender didn’t occur until he got six yards past the line of scrimmage.  At this point, a helpless linebacker got an up close and personal view of Lamar’s lighting quick change of direction ability.  Jackson was at full speed when he stuck his outside foot in the ground and drove his hips up field,  which carried his body two yards away from the line backer and about three yards up field in a matter of nano seconds.  The linebacker actually did his job however, turning Lamar back into two teammates pursuing the play from the backside.  The effort by the second level defenders stop Jackson from scoring, but the poor lane discipline by the defensive line allowed him to escape the blitz and pick up another ‘Cards first down.

The second run on the video is a good display of front line blocking, except for the pulling guard, let’s break it down.

I’m not certain, but this looks like a midline read option where Lamar’s key is to watch if the DT follows the pulling guard.  If the DT follows the guard, he pulls it out of the running back’s bread basket and heads up field.  On this play, the defensive lines up in a 4-3 with the strong side DT lined up in a 1.5 technique on the right guard side of the center.  The weak side DT is lined up on 3.5 technique on the tackle side of the left guard.  This was a perfect play call, layered off of the previous play that left the middle of the field wide open because of this peculiar defense gap technique alignment.

Go up and watch the video one more time and you’ll notice there is no interior lineman available for Lamar to read because the center and the left tackle smash down and kick the weak side tackle and end to the outside.  The right guard puts the DT on the right side in the 1.5 technique on skates and forces him all the way into the opposite “B” gap, opening a sea of green turf from the left “A” gap to the right “B” gap. 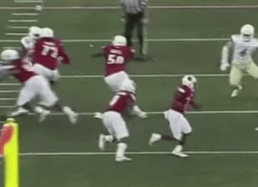 Jackson sees all of this developing in front of him because he processes information like a super computer and he also has a sniper’s vision.

He pulls the ball away from the back and heads up field.  The left guard, the one who pulled doesn’t get a hat on the linebacker as I am certain he was supposed to, leaving the linebacker free to make the tackle.  Had the backer filled maybe the guard would have engaged him, but he was sucked into the flow of the play and had to scramble to get back in his lane.  This put him in the impossible position of trying to match his change of direction ability with that of a shapeshifting immortal with the dexterity of a water bug.

After disposing of #4 and his feeble attempt at an arm tackle with the quickness, Jackson encounters a safety, #41, who decided to come up field and fill because the linebacker in front of him was enveloped by the right tackle who fired into the second level.  While #41 was coming up field,  he failed to keep his inside shoulder outside of the hashmarks, creating an impossible angle to get a hit on a ball carrier of Lamar Jackson’s ability.  The only man with a chance to make a play was the corner, but he had his hands full with Jamari Staples who did a good job of mirroring him downfield then forcing him to the sideline when he tried to come up and make a play.  This is where lamar not only changes direction away from the corner and Staples but also manages to accelerate at the same time.  His quick twitch change of course and rapid deceleration and acceleration allowed Jackson to get just enough separation from the pursuing safety whose pursuit lane he just ran back into after he dismissed him two-and-a-half seconds prior.  #41 manages to tackle Jackson but not until after the ball was over the goal line.

Those who have seen him play know Lamar Jackson is an elite runner, but maybe they didn’t know the science behind it.  Defensive coordinators are certainly aware of this but few have been able to coral him so far.  The new problem DC’s will face is the fact that Lamar now looks comfortable going through his reads and checking down to his backs in the flats.  I  made a video and a breakdown of this development in his passing prowess but this post ran a bit long so I’ll post that later as a separate piece.