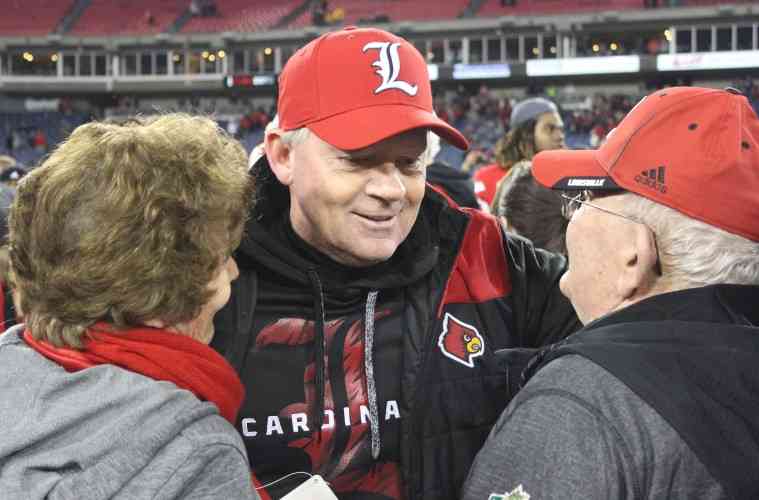 How to watch Louisville v. Charlotte like a curmudgeon

“Graduation is only a few days away, and the recruits of Platoon 3092 are salty. They are ready to eat their own guts and ask for seconds.” – Private Joker

Let some locals tell it, Lamar Jackson has mastered the playbook and will look like Peyton Manning running on Michael Vick’s legs.  The offensive line will improve ten fold, going from one of the worst in the country to an impervious wall of humanity.  According to a certain beloved fan blogger turned rush-hour drive radio host, FSU and Houston will feel the wrath of revenge this season and the Clemson Tigers ain’t even safe in Death Valley.  Wolf ticket sales have been through the roof over the last two months in Louisville, Kentucky, but you can still get tickets to the UL v. Charlotte game on stubhub.com for $29.99.

Tomorrow kicks off the season and I fear the hype will not subside after the beat down the ‘Cards will administer to the 49ers.  If I was a betting man, I would definitely pick UL to cover the 39.5 spread.  The sunshine will be pumped and the Friday workday hangover will be bitter sweet.  While everyone is celebrating a savage clobbering, I will most likely be plunging in the nuances of the game on my DVR, looking for any generalizable shortcomings from each individual Louisville unit.

Here’s a quick rundown of what I will be focusing on:

1.) What can I take away from the offensive line’s performance?

This should be an easy study.  The first red flag will be the number of procedural penalties.  The line has had all spring and summer camp to work with Lamar Jackson. I expect there to be maybe one hiccup at least, but anything more than that will suggest that the specter of last season’s undisciplined unit still looms over this year’s frontline.

The next thing to watch is how many assignments the line blows.  This will be easy to discern against a far inferior foe in Charlotte’s front seven.  I don’t expect them to be perfect, but if you are seeing defenders fill gaps unmolested or Lamar having to panic and take off after one read, it’s not gonna be because a ‘Card lineman lost a matchup physically, it will be a mental misstep in most circumstances.

Finally, and while I highly doubt this happens, if I see the 49ers actually outmuscling the ‘Cards and getting pressure on Lamar or linebackers filling gaps and setting the edge, it is time to panic.  Honestly, I don’t expect to see many mistakes tomorrow, and Brandon Radcliffe should run amuck. That said, look for the little things that indicate the line may not be as cohesive as advertised, mainly false starts, holding calls, illegal man downfield penalties, blown assignments, and god forbid, lineman getting whipped physically.

2.) Lamar’s mastery of the playbook and pocket presence.

This one will be trickier to discern than the offensive line’s efficiency.  For one, Lamar may not need to ever go past his first read in the progression if Charlotte can’t cover anyone.  This is a very real possibility, especially if the line holds up like it should.  There is also the possibility that Louisville simply crams the ball down the ‘Niners’ collective throats all day and tosses the occasional long ball when they stack the box.

Maybe this isn’t the case and Bobby Petrino goes all DEFCON 1 and unleashes a down-field aerial assault of nukes on his hapless opponents.  That probably won’t happen however, as it serves no other purpose than hubris to put Jackson’s true mastery of the playbook on tape for Syracuse or FSU at this point.

What I expect to happen however, is a vanilla game-plan where Petrino will run some basic offense staples until Charlotte can stop them.  One of the staples in that offense is the play-action bootleg with the tight end running a flood drag with the QB.  It will be interesting to see if Lamar can float the rock out there with touch on the run and allow his talented tight ends to catch it in stride and take off up field. Look for Cole Hikutini to show out.

I also expect Lamar to throw some zeroes (WR screens) and nines (Go routes) and those should be successful and fun for the fans but they won’t tell much.  What I want to see however is two-fold, first I want to see Lamar keep his eyes downfield while scrambling, second I want to see Lamar climb the pocket and hit his second or third read.  I don’t anticipate him needing to do either of those things often, but if he does, I will definitely make a video of it and post it after the game for further analysis.

All takes concerning Bobby Petrino’s demeanor this season have perceived him to carry an uncharacteristic optimism, even a reserved giddiness.  Some will say that is because of the talent and depth he has assembled in his three years here.  While there is truth to that, last season’s team had a lot of talent too, arguably more on defense, yet Bobby didn’t have the same glow around this time last year.  When you see a coach exude a quiet confidence, like Petrino has recently, it’s because he has a smart, disciplined team that has “bought in” to the system.

It’s one thing to have a talented bag of hammers, but when you have an arsenal of smart missiles at your disposal, you know you can do more damage without breaking much of a sweat.  Last year’s team beat itself in games against Auburn, Pittsburgh, and Houston.  Hell, if Louisville doesn’t miss two makable field goals they would have knocked off Clemson and possibly changed the entire complexion of the college football playoffs.

If you’re a Louisville fan, which you prolly are, you want to see unforced errors cut to a minimum.  Missed blocks, tackles and kicks, blown coverage assignments, bad angles, penalties, dropped balls, and most dastardly of all turnovers, will suggest to me that Petrino’s swagger may have been more show than substance.  These things will be the game inside of the game that isn’t really going to be much of a game.  Feel me?

For the record, I fully expect a smooth boot up game with very few glitches.  But if you’re like me, and try to find meaning in the meaningless affairs in life, throw the cynical prescription lenses I have prescribed in your red, black and yellow glasses and watch the game on your DVR when the bourbon wears off sometime next week.