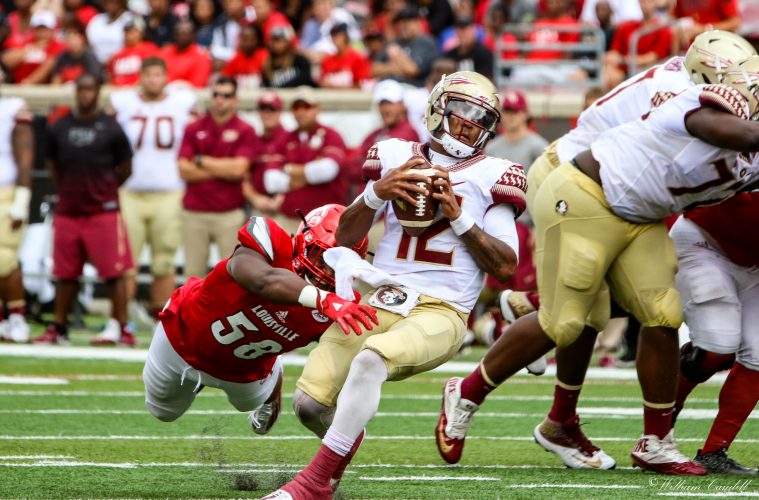 Game review: A case study on how to get drubbed by Louisville.

There would be no miraculous comeback and second half heroics on September 17th, 2016 at Papa John’s Cardinal Stadium.  The Louisville Cardinals annihilated the number two ranked team in the country like it was playing against its second string units in the Spring Game.  Nolenation is reeling this morning.  There is reactionary clamor about firing Jimbo Fisher, Charles Kelly, and Rick Trickett.  Some of the ‘Nole faithful are pointing to the fact that Jimbo Fisher is 6-4 over his last ten games, and his teams consistently start slow and show a lack of focus far too often.  While the questions about Fisher’s job security are premature and fueled by emotion, the slow starts and lack of focus that have plagued FSU since the 2014 season kicked off cannot be denied.  The ‘Cards came out and laid a beating on an undisciplined FSU team reminiscent of The Passion of the Christ.

Let me break it down real quick.

Louisville’s execution yesterday was both violent and efficient, bringing out the inner puppies of Jameis Winston’s proverbial “dogs” from FSU.  Let’s forego statistics and look at what took place on the field Saturday at high noon.

On the opening drive, Lamar executes a perfect play action fake here and wound up hitting Staples down to the 2 which would set up Lousville’s first score.

Watch how he hides the ball a la Randall Cunningham.

Watch the ball placement on this play action fake, Randall Cunningham used to do it just like that. pic.twitter.com/j0qLYMnY7I

While Lamar Jackson shows how to execute a play action fake, on the ensuing FSU drive, Francois does the opposite.  It appears Francois fails to sprint out after the play fake, dropping straight back and allowing James Hearns to destroy him from the backside pursuit angle for his transgression.  Forgive my awful grammar in the tweet, I’m still dealing with some personal issues and a hangover concussion.

This is either Francois not sprinting out like he, supposed to, or it's an inexplicably stupid play design. pic.twitter.com/2LxSS7Y1Rk

Lousville stymied the FSU defense all day. One of my keys for how UL would achieve this, was the play of Josh Harvey-Clemons.  In our FSU preview podcast we discussed Harvey-Clemons’ new role in Louisville’s defense.  Here he comes upfield looking for contact, blows up his blocker and makes a great stop.

Another topic of discussion during our FSU preview was how Louisville could stop Dalvin Cook.  Keith Poynter asked me what Houston did so well to shut down Dalvin Cook in the Peach Bowl last season.  I told him they pinched down on the offensive line closing gaps for Cook to run through.  Here is an example of this.

This is a great job of pinching by the right side of the UL D-line, congesting the B and C gaps. @Villesportslaw pic.twitter.com/CYJdKRfQHg

Another key to stopping Dalvin Cook is getting linebackers to come up hill and hit him before he can accelerate.  This is a prime example of Stacy Thomas doing just that.

This is how you fill. Take notes young linebackers: pic.twitter.com/qZwOPBORFi

Sticking with Louisville’s defensive game plan, Kieth told everyone in the FSU preview podcast that he wanted to see Grantham put the heat on Deondre Francois consistently.  He got his wish, and Grantham brought heat from everywhere.  On this blitz, he dials up a nice inside stunt and forces an awful pass on 3rd down.

Grantham dialed a lot of stunts up the A and B gaps yesterday. @Villesportslaw pic.twitter.com/RrdtQpA21w

I know I said I was done, but juxtapose the timing & tenacity of this blitz w/the one where Lewis showed too early. pic.twitter.com/MfvsXMKGvo

Now let’s look at how not to blitz by looking at the FSU defense.  Here Marcus Lewis telegraphed his intention to blitz, which Lamar Jackson recognized instantly and simply checked down to a wide open running back in the flat for a 3rd down conversion.

In the FSU preview podcast I praised Jackson’s ability to go through his progressions, here he exhibits good pre-snap blitz recognition.

Young DB's at home, if you're gonna blitz, don't alert the QB to it pre-snap like this: pic.twitter.com/FNhJN5snCA

Again we look at the FSU tape for an example of how to not do something. Watch Deondre Francois show his inexperience, failing to recognize Louisville had a numbers advantage on the left side.  He paid with pain.

Disastrous pre-snap read failure by Francois. There are three defenders flanking two blockers. This is on #12. pic.twitter.com/MRd3gSxnda

While Louisville lived in FSU’s backfield most of the game, FSU struggled to dial up pressure.  This was in part due to good scheming and blocking by the ‘Crads as well as half-hearted efforts from FSU’s defense like this.

UL's O-line has shown great progression this season but FSU gotta come harder than this. Look at the time: pic.twitter.com/icYaacQdpm

FSU’s offensive line on the other hand, was outclassed most of the day.

Gotta wonder when Jimbo and Trickett pull the plug on the Rick Leonard experiment. This is awful. pic.twitter.com/7fY4vYshko

While some of the hits Francois took was on the line, some of them were products of bad scheming, as can be seen here.

After all the safety and linebacker blitzes to this point, one would think a drag would be incorporated on 3rd & 8. pic.twitter.com/bZdveUoj7m

Louisville’s defense looked far superior to FSU’s offense, but the ‘Noles made a lot of mistakes that helped the Cardinals defense look like the 2000 Ravens.

Bonehead decision by Travis Rudolph here. He makes the catch and turns back into the defense rather than outside. pic.twitter.com/xzV7dfH7hf

My son Jace called this,

Yup, someone screwed up their assignment.

The nail in the coffin pic.twitter.com/KyallD9jS4

What is Bobo doing here? pic.twitter.com/jwFqC7Qc3i

While the FSU offense was pathetic, the FSU defense was even worse.  When playing a read option quarterback like Lamar Jackson, every player has to play assignment football and maintain discipline at all times.  FSU has struggled against read option tempo offenses recently. See the 2014 ACCCG v. Georgia Tech, the 2014 Rose Bowl, the 2015 Peach Bowl, and the 2016 massacre at Papa John’s.  Once the read option gets rolling on the ground, the short passing game and quick hitters open up.  This happened against Oregon in 2014 and it looks like Bobby Petrino just used the Ducks’ blue print.

Matt Thomas got caught guessing and Radcliffe made him pay. pic.twitter.com/m7TGvw8MJ6

Play immediately after the Brandon Radcliffe run. If B-Rad can be consistent this year, UL will set all the records. pic.twitter.com/prjW7EeO52

Here is the danger that unfolds when Radcliffe runs effectively. Watch the D flow toward him & Lamar breaks lose. pic.twitter.com/HnxDq7f7aa

Matthew Thomas played on skates way too often in this game. This is embarrassing. pic.twitter.com/KJn6G9GrAa

Want your ass kicked repeatedly vs Louisville this year? Keep having your outside contain guys keying the inside run pic.twitter.com/26GYMwwW23

How to not defend against the read option, have both ILB's sitting back flat footed instead of filling downhill. pic.twitter.com/lqb6BRjJDM

3 man rush on 3rd & 5, Quick knifes the zone, #20 whiffs on the tackle, and UL would not surrender mo after this. pic.twitter.com/prCUDAy60v

There wasn’t much bad footage from Louisville yesterday, but here FSU’s best run of the game, keyed by good assignment blocking and an open field whiff by Chucky Williams.

This is the best play by the 'Noles offensive line. Nice kick out by TE Saunders and Leonard gets to the 2nd level. pic.twitter.com/6WSJMfyutz

That play would lead to another miscue by Williams that let FSU cut the lead to 14-10.

This is on Chucky Williams, why he is retreating two yards deep in end zone is beyond me & Shaq can't cover two men. pic.twitter.com/zksshPqnhk

While FSU failed miserably all day in all three phases of the game, Louisville got its first punt return touchdown since 2010 and this would crush any hopes of another improbable second half FSU comeback.

This will end my game review. There would be no comeback on this day for the 'Noles. This was the dirt on the coffin pic.twitter.com/45Scg3TtKp

The only knock on Lamar yesterday is that he missed a few open receivers down field and he also forced a few passes against FSU corner Tarvarus McFadden.

He gets lucky on one, gets picked on the other.

This is the universe striking a harmonious balance and atoning for the Ermon Lane TD in 2014. That's all I got here. pic.twitter.com/qRQ6Nsghzn

Here's a positive for FSU (or negative for Lamar depending on how you slice it) as McFadden makes a nice pick. pic.twitter.com/bV53T491SX

The take away from this game is that Lamar Jackson being used in the read option attack is only one of the many ways in which Petrino can attack opposing defenses.  This is horrifying to think about if you are on the other sideline.  Just when you think you know the identity of the Louisville offense, it mutates like some sort of deadly virus that can’t be contained.

If you are a Louisville fan you can go ahead and beat your chest, point your finger indignantly at any naysayer out there and tell them without question, “we are for real.”  Yesterday Bobby Petrino, Todd Gratham, Lamar Jackson, and the entire Cardinal team put the nation on notice.  They are a legit title contender, and underestimating them is a foolish endeavor to trifle with.