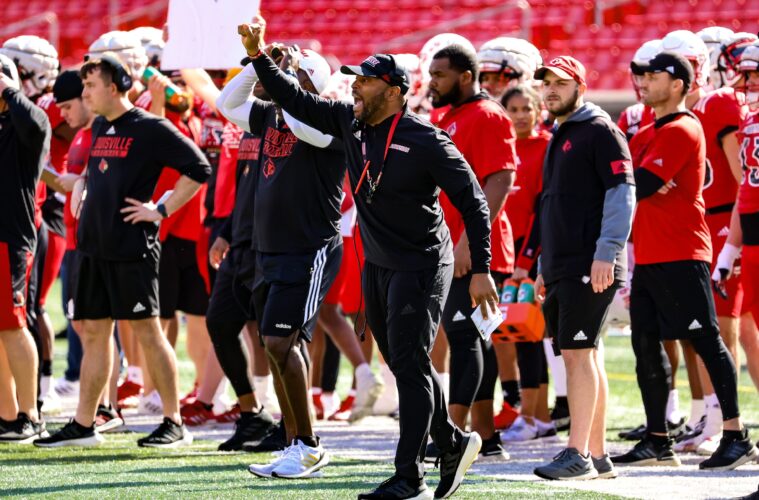 Scott Satterfield inherited a very bad defensive team in 2019. The Cards were going to be a MAJOR project everywhere, but mostly on the defensive side of the ball following the 2018 season. Coupled with that, there was a lot of turnover, a vacuum of a recruiting class for 2019 (of which only 9 players still remain on the roster).

Satterfield chose Bryan Brown when hired and understandably it was going to be a “Patience Required” type situation for the program, for Satterfield, for the administration and for the fans.

Bryan Brown got that. And he got a raise after turning down Tennessee following the 2020 season.

Friday night Florida State got the edge WAY too easily. When an offense gets the edge because a play is well blocked, then you tip your cap. When your defenders aren’t blocked and the ball carrier is just running around the defense…. that’s bad defense.

Louisville Has Turned Around Bad Defenses Before….. FAST.

When Charlie Strong arrived in 2010 the first thing he did was find out who could go sideline to sideline. Who was going to hustle and contain and tackle. That was the requirement. Everything else was secondary. Strong & Vance Bedford weren’t going to get beat defensively because of fundamentals. As a result some unexpected names showed up on the depth chart: Who is Daniel Brown? He is starting a 2-star TRUE FRESHMAN at Safety (Hakeem Smith)??? He’s playing a 2-star Running Back from Bowling Green at Safety (Shenard Holton)????? He’s playing freshman Brandon Dunn & Roy Philon at Defensive Tackle? He got a JUCO transfer from Nevada (Mike Evans) to play Nickel.

Bottom line, sometimes you build…. and sometimes you teach and identify players…. and other times you just go and find dudes who can get the job done. Louisville was the #14 Defense in the nation in Charlie Strong’s 1st year.

So What Has All This Patience Done For the Louisville Program Under Bryan Brown?

Well…. not a lot. The numbers about to be demonstrated aren’t encouraging. After the 2021 season (Year 3 for Satt & Brown) fans wondered if Satterfield would make changes on the defensive side of the ball. He didn’t. And that’s his decision. The message in coming back for Year 4 is: This is going to turn around.

So let’s see if we can spot a trend (note 131 teams now play FBS football):