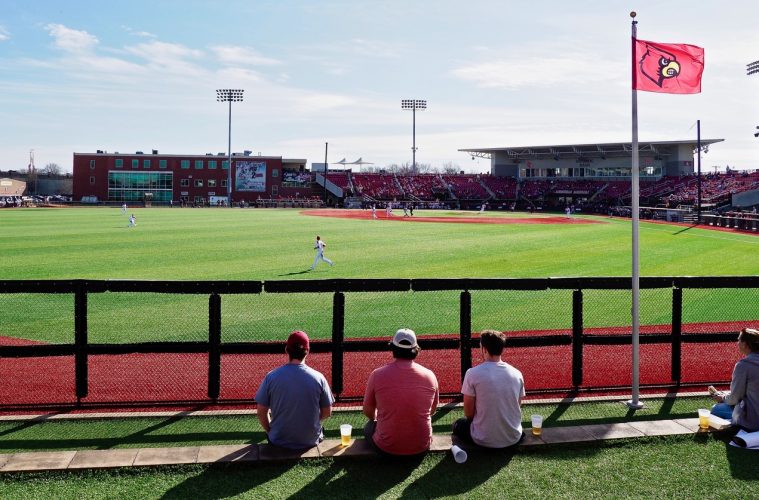 Justin Lavey’s two-run homer in the seventh inning lifted the 10th-ranked Louisville baseball team to a 6-4 victory over Xavier on Tuesday at Jim Patterson Stadium.

With the score even at 4-4 and two outs in the seventh, Lavey powered a 2-2 offering from Trey Schramm over the wall in left center to push the Cardinals ahead for good as they moved to 8-0 on the season. A sophomore from Kenosha, Wisconsin, Lavey finished 2-for-3 at the plate and scored an additional run in the sixth inning to go with his second home run of the season. Lavey’s blast capped a comeback for Louisville, which overcame a 4-2 deficit by scoring the final four runs of the game in a rematch of the 2017 NCAA Regional final also won by the Cardinals.

Freshman righthander Bobby Miller earned his second win of the season twirling 1.2 innings of scoreless relief with two strikeouts. Junior righty Sam Bordner closed out the victory by retiring all four batters he faced, including two by strikeout, to register his third save of the season.

The game-changing seventh inning started with a one-out single from Campbell, who moved to second with a stolen base before trying to score on a single by Rumoro but was tagged out at the plate following a strong throw home by rightfielder Joe Gellenbeck. Moments after Xavier’s strong defensive play kept the teams even, Lavey grasped the momentum for the Cardinals with his third career home run.

Louisville opened the scoring with a run in the second inning on a solo home run off the bat of Stringer, who clubbed a 0-2 offering from Henry Miller over the wall in left center for his sixth extra-base hit of the season. The Musketeers evened the score at 1-1 in the top of the third on a two-out RBI single through the left side from Gellenbeck.

An inning later, Xavier gained its first lead of the afternoon in the fourth inning when Matt Warkentin connected for his second home run of the season sending the first offering from junior Bryan Hoeing over the wall in left center for a solo shot and a 2-1 lead. The Cardinals answered in the bottom of the fourth after Stowers evened the score at 2-2 with his two-out RBI single though the left side to send Rumoro home.

The Musketeers moved back ahead at 4-2 after scoring a pair of runs in the fifth inning. Chris Givin scored the go-ahead run from third base on a wild pitch before Blaine Griffiths added to the advantage with his RBI single through the left side to send Conor Grammes home.

Louisville battled back with two runs in the sixth inning to even the score at 4-4. Stowers drove in the first run of the inning with his RBI sacrifice fly to left center to plate Lavey. Fitzgerald then scored the tying run from second base on Snider’s RBI single to left field to set the stage for the decisive seventh inning.

Up next, No. 10 Louisville will host Southern Conference foe Western Carolina for a weekend series at Jim Patterson Stadium starting Friday at 3 p.m., ET. The teams are also slated for Saturday at 1 p.m., and Sunday at 1 p.m.

Season ticket packages as well as single game tickets for the 2018 University of Louisville baseball season are on sale now and can be purchased online at GoCards.com/bsbtickets, by phone at 502-GO-CARDS or by visiting the Louisville Cardinals Ticket Office, located near Gate 2 at Papa John’s Cardinal Stadium (2800 South Floyd Street) on weekdays from 9 a.m., until 5 p.m., ET.