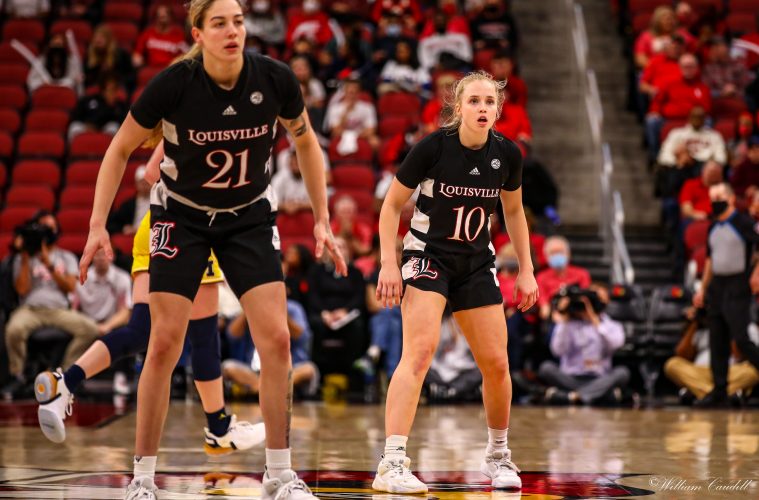 Engstler earns both All-ACC First Team and All-Defensive Team honors after leading the ACC with 2.5 steals per game, while her 1.9 blocks per game rank fifth. She has 52 blocks on the season, which is tied with Kylee Shook for the fourth most all-time in Louisville program history.

She ranks third in the ACC with 9.1 rebounds per game and has led the Cardinals in rebounding in 25 of 28 games. She is averaging 11.6 points per game, while shooting 47.6 percent overall and 27-of-67 (.403) from deep. She has double-doubles in her last three games and has 10 on the season, which ranks fourth in the ACC and is the most by a Louisville player since Shook had 11 during the 2019-20 season.

Earlier this week, Engstler was named a Naismith Defensive Player of the Year Semifinalist.

In ACC Play, she ranks sixth in the league with 15.4 points per game, while shooting 45.7 percent from the floor, which ranks eighth. She’s shooting 46.4 percent from 3-point range, which leads the league.

Widely regarded as one of the toughest defenders in the country, she averages 1.4 steals per game in just over 20 minutes per game. She has recorded at least one steal in 22 of 27 games played this season.

Verhulst ranks in the top 10 among ACC freshmen in both points and assists. Four times this season, she has finished with 10-plus points, including a season-high 13 points on 3-4 shooting from deep in the win over Duke. She is shooting an impressive 41 percent from beyond the arc on the season.

The Cardinals will be the 2-seed in the ACC Tournament, which begins on Wednesday. Louisville receives a double-bye and will open with Miami, Duke or Pitt on Friday night at 6 p.m. ET.