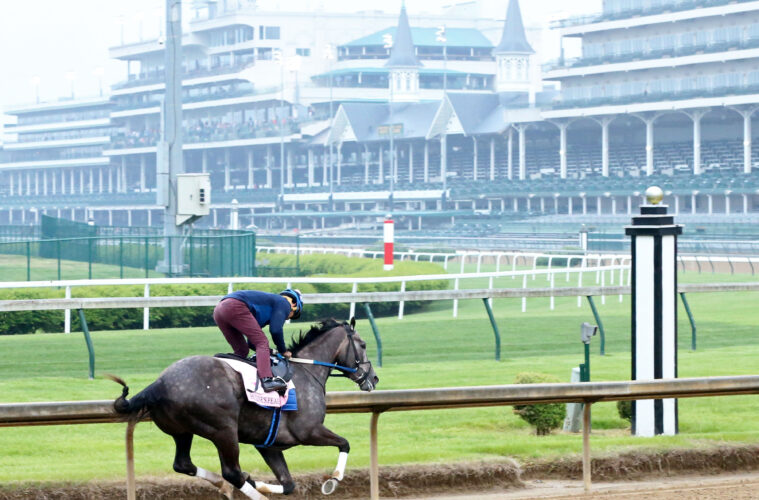 Digital Age, who also won the American Turf (GII) here in 2019 in his only other start at Churchill Downs, will be ridden by Javier Castellano and exit post six.

Brown will saddle another Klaravich runner in Domestic Spending (GB).

A winner of four of five career starts, Domestic Spending will be making his first start since taking the Hollywood Derby (GI) over Thanksgiving weekend last fall at Del Mar. Flavien Prat has the mount and will exit post five.

Robert and Lawana Low’s Colonel Liam has won his past three starts on the grass, following his victory in the Pegasus with a score in the Muniz Memorial Classic (GII) at Fair Grounds. Trained by Todd Pletcher, Colonel Liam will be ridden by Irad Ortiz Jr. from post three.

The Derby City Distaff will go as the seventh race with a 1:56 p.m. post time.

Trained by Bob Baffert, Gamine has won six of her seven career starts and capped off her championship campaign with a track record-setting romp in the Breeders’ Cup Filly & Mare Sprint (GI) at Keeneland in November.

Her top challenger figures to be Bell’s the One who is seeking to become the first repeat winner of the race.

Owned by Lothenbach Stables and trained by Neil Pessin, Bell’s the One has compiled a 4-2-2-0 record at Churchill Downs. Regular rider Corey Lanerie has the mount and will exit post three.

Robert LaPenta, trainer Ron Moquett and Head of Plains Partners’ Eclipse Award winner Whitmore looms large in a field of 13 for the 86th running of the $500,000 Churchill Downs presented by Ford (GI).

The seven-furlong main track test goes as the 10th race Saturday with a 4:31 p.m. post time.

Whitmore, winner of the Breeders’ Cup Sprint (GI) last fall at Keeneland to earn champion sprinter honors for 2020, will be making his third start in the Churchill Downs. He was fourth in 2018 and fifth in 2019 that marked his most recent start at Churchill Downs. Whitmore will exit post nine and be ridden by Ricardo Santana Jr.

Among the challengers to Whitmore is two-time Grade I winner Mind Control. Trained by Gregg Sacco, Mind Control returned from a 3 ½-month layoff with a runner-up finish in the Carter Handicap (GI) on April 3 to begin his 2021 campaign. Irad Ortiz Jr. has the mount and will leave post two.

My Racehorse CA and Spendthrift Farm’s Got Stormy head a field of seven fillies and mares for the 36th running of the $500,000 Longines Churchill Distaff Turf Mile (GII).

The Longines Churchill Distaff Turf Mile will go as the day’s sixth race with a 1:14 p.m. post time.

Trained by Mark Casse and featuring earnings of more than $2 million, Got Stormy will be making her second start in this race having finished second in 2019. A Grade I winner against males and females, Got Stormy opened her 2021 campaign with a nose victory over Saturday rival Zofelle (IRE) in the Honey Fox (GIII) Feb. 27 at Gulfstream Park.

A six-time graded stakes winner, Got Stormy will be ridden by Tyler Gaffalione and break from post five.

The main track test will go as Saturday’s eighth race with a 2:48 p.m. post time.

Trained by Steve Asmussen, Jackie’s Warrior won his first four starts, a streak that included daylight victories in the Saratoga Special (GII), Hopeful (GI) and Champagne (GI). Jackie’s Warrior finished third behind Essential Quality over a sloppy track at Oaklawn Park in the Southwest (GIII) in his lone start of 2021.

Joel Rosario has the mount and will exit post three.

Figuring to be one of the main challengers to Jackie’s Warrior is Godolphin’s homebred Prevalence.

Trained by Brendan Walsh, Prevalence started his career with two blowout victories before finishing sixth in the Wood Memorial (GII) in his most recent start. Tyler Gaffalione has the mount from post five.

Trained by Bill Mott, Annex comes into Saturday’s race off victories in the Palm Beach and Cutler Bay at Gulfstream Park. Irad Ortiz Jr. has the mount and will exit post four.

Trained by Shug McGaughey, Scarlett Sky rallied from far back to win the Transylvania by a half-length after being beaten by a head in the Palm Beach by Annex. Joel Rosario has the mount Saturday and will break from post 13.

Palazzi, who took the Texas Turf Mile to start his 2021 campaign, is trained by Mark Casse and will be ridden by Tyler Gaffalione from post 14.