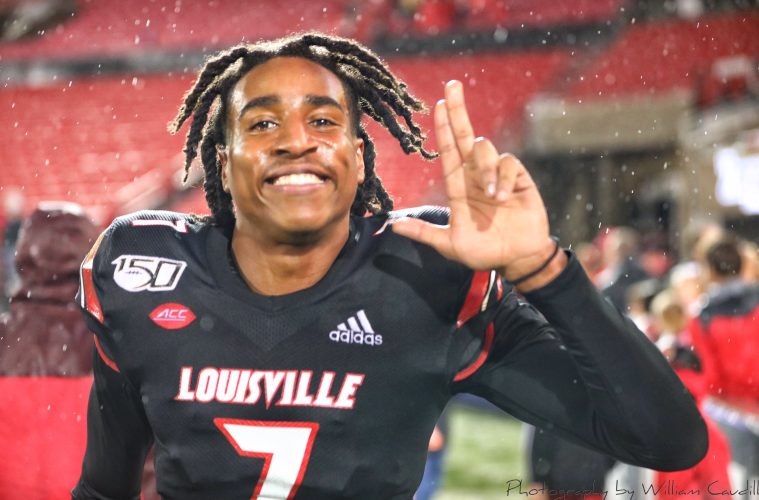 Dez Fitzpatrick Selected in the 4th Round by Tennessee Titans

University of Louisville wide receiver Dez Fitzpatrick didn’t have to wait long to hear his name called during the third day of the NFL Draft as he was selected with the 109th overall pick in the fourth round by the Tennessee Titans on Saturday.

The native of Farmington Hills, Mich., was the fourth pick in the fourth round and the second UofL wideout selected in as many days. Fitzpatrick was selected with the 109th overall pick after a trade with the Panthers. The Titans received pick No. 109, and traded picks 126 (4th), 166 (5th) and 232 (7th) to the Panthers.

“I was super excited to get the call, and see the Nashville area code pop up (on my phone),” Fitzpatrick said. “The conversation with the coaches, I definitely felt wanted. I can’t wait to be a Titan. … I feel like I fit into what they are trying to do in Nashville. I am just so happy to be a Titan.”

Fitzpatrick is the ninth UofL wide receiver to be drafted in school history and it’s the second time in school history that a pair of receivers were selected in the same draft. Harry Douglas was a third-round selection and Mario Urrutua was a seventh-round pick in 2008.

Fitzpatrick became the 131st Cardinal to be selected in the professional draft, and gives the Cardinals 24 NFL draft picks since 2014.

The 6-foot-2 wide receiver finished his four-year Louisville career with recorded 154 receptions (ninth all-time) for 2,589 yards (sixth all-time) and 21 touchdowns during his career at Louisville. He averaged 16.8 yards a reception for his career, and he also recorded 21 career touchdown catches, which was tied for fifth in school history. He finished his career tied for 10th with eight 100-yard receiving games.

In 2020, Fitzpatrick appeared in 11 games, finishing with 43 catches for 833 yards and three touchdowns. The senior caught four passes for 110 yards, including a 70-yard touchdown to open the season in a win over Western Kentucky and followed with seven passes for 74 yards in the loss to Miami in the next game. In a loss to Virginia Tech, Fitzpatrick caught five passes for 158 yards against Virginia Tech, including a career-long 82 yard touchdown reception. He also had his best career output at Boston College with 182 yards on eight catches, including a 69-yard score.

As a redshirt freshman in 2017, Fitzpatrick finished second on the team with 45 catches for 699 yards and a team-best nine touchdown catches, which equaled the school’s  freshman record. He was named an all-ACC honorable mention that season after averaging 15.5 yards a receptions.

In his first collegiate game versus Purdue, Fitzpatrick caught four passes for 95 yards and a touchdown — his first collegiate touchdown was a 20-yard reception in the fourth quarter to put the Cards ahead 32-28.  Fitzpatrick had career highs of 10 catches and 134 yards in a loss versus NC State. The 10 receptions tied Ibn Green’s freshman record, first set against North Carolina on Nov. 9, 1996 and the 134 receiving yards were the most by a freshman since 2005.