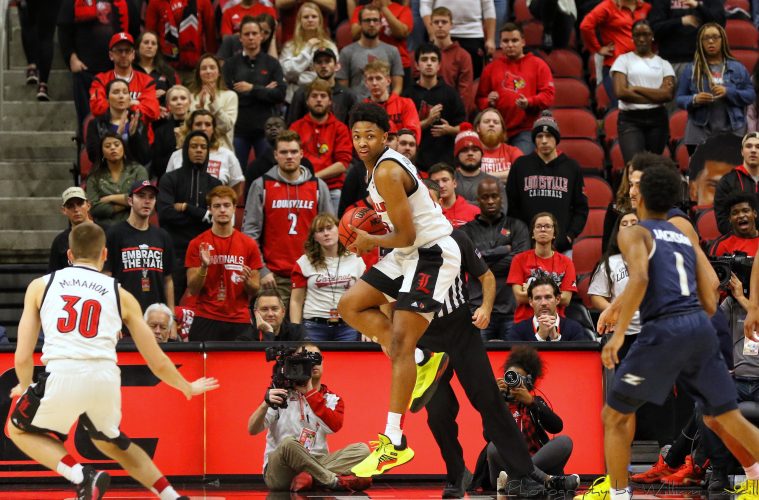 University of Louisville freshman guard David Johnson was named the ACC Freshman of the Week for games Jan. 13-19.  Johnson is the first Louisville player to earn the recognition since Jordan Nwora was honored on Feb. 12, 2018.

In a pair of Cardinal victories on the road last week, Johnson averaged 15.0 points, 5.5 assists, 3.5 rebounds and shot 57.9 percent from the field (11-of-19 FG, 2-2 3FG) off the bench.  He produced his first career double-digit scoring effort with 11 points, four assists and three rebounds at Pittsburgh in 20 minutes off the bench.  He led the Cardinals with a career-high 19 points, seven assists and three steals at then-No. 3/3 Duke, adding four rebounds and three dunks.

A 6-5 guard from Louisville, Ky., Johnson’s 19 points were the most by a Louisville player off the bench against an AP top-three ranked opponent since former All-America guard Russ Smith scored 30 points against No. 3 Kentucky in 2011.  Johnson had scored 37 points for the season before totaling 30 in the last two games.  He missed nearly four months, including the first four games of the season, after recovering from surgery on his left shoulder on July 30.

Louisville, ranked No. 6 by the Associated Press and No. 5 in the USA Today poll, returns home for the first of two straight in the KFC Yum! Center as the Cardinals face the Georgia Tech Yellow Jackets on Wednesday at 7:04 p.m.  The Cardinals have won four straight, including its last three on the road.