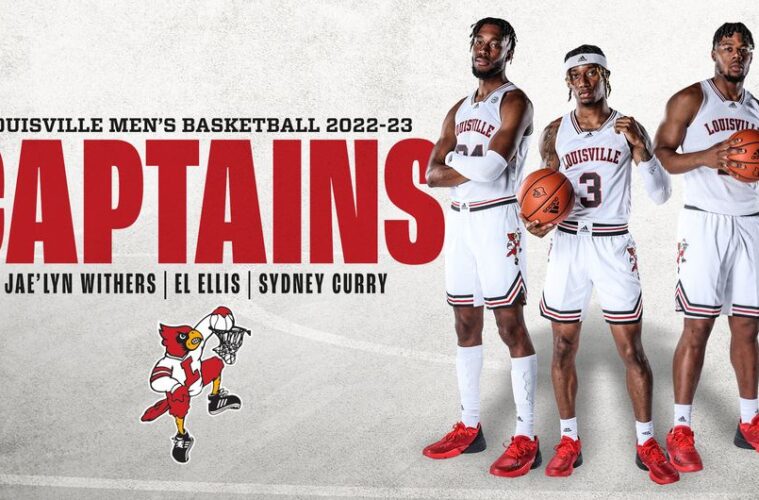 Although all three players bring experience in a Cardinal uniform, this is the first time as a captain for each member of the trio.

The 6-foot-8 senior forward Curry averaged 7.1 points and 4.4 rebounds in his first year at UofL in 2021-22, but blossomed late in the year with a dominant string of games.

He averaged 17.6 points and nine rebounds over his last five games while shooting 64.4 percent from the field. Curry achieved two double-doubles in his last four games, including 18 points and 11 rebounds at Virginia Tech and 24 points with a career-high 14 boards against Virginia. He also had a career-high 28 points at Wake Forest, the most by a Cardinal since Jordan Nwora scored 37 at Boston College on Jan. 29, 2020.

The Fort Wayne, Ind., native scored 165 points in his last 16 games after tallying a combined 33 points over his first 12 games. He led the Cardinals in field goal percentage for the season at 67.2 percent and was the only UofL regular who shot above 50 percent.

The 6-3 senior guard Ellis is Louisville’s leading returning scorer at 8.7 points per game, to go along with 51 total assists and 41 made 3-pointers at a 36 percent clip.

Ellis started six of the last nine games for UofL last year and was a double-figure scorer in seven of the last 12 games, including a career-high 25 against North Carolina. He averaged 11.3 points per game over the last 12 contests.

The Durham, N.C., native led UofL in scoring on five occasions and scored 18 or more points four times, including the 25-point outburst vs. North Carolina, 22 points off the bench at Michigan State and 18 points against Duke. He tied for the runner-up position in the ACC Sixth Man of the Year voting.

The 6-9 redshirt junior forward Withers is one of Louisville’s veterans with two years of playing experience at UofL under his belt.

He overcame injuries last season to start 15 games and was second on the team in rebounding (4.6 rpg) and third in steals (20 total), while averaging 5.8 points per contest.

Prior to a late injury against Virginia Tech, Withers averaged eight points and 4.7 rebounds over his last 12 games while shooting 45 percent from the field, scoring nine or more points in seven of those 12.

The Charlotte, N.C., native averaged 10 points and 7.7 rebounds as a redshirt freshman in 2020-21, shooting a team-best 55 percent from the field. He was named to the 2021 ACC All-Freshman team, becoming the first UofL freshman to receive the honor in the Cardinals’ time in the ACC, and first overall for Louisville since 2012.

Fans will have their first chance to see the captains and the rest of the Cardinals at their annual preseason basketball event, Louisville Live, on Oct. 21 at Louisville Slugger Field. Tickets are available at GoCards.com/LouisvilleLive.

UofL will also host its annual Red and White Scrimmage on Oct. 23 at the KFC Yum! Center. Tickets can be purchased here.