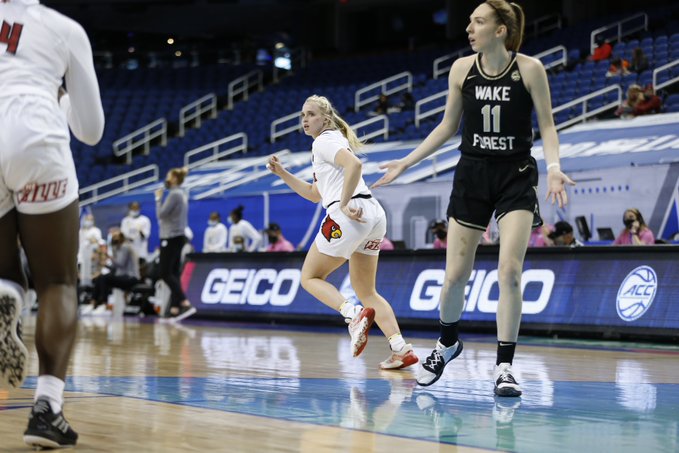 The No. 5 Louisville Cardinals kicked off their ACC tournament run this afternoon in Greensboro against the Demon Deacons of Wake Forest, who gave them some trouble during the regular season.

The Cards came out with aggression in the first quarter and played a good defensive game. Thankfully, that is what helped them hold onto their lead through the first period because the shooting numbers were not great. Dana Evans would get her first three pointer of the day less than three minutes in, but those would be her only points in the quarter. As a team, Louisville was 8-23 through the first ten minutes and 1-5 behind the three-point line. The team was able to force 5 Wake Forest turnovers and get several stops on the defensive end. There was still a strong sense of aggression in the second quarter, but things were a little sloppier for Louisville through the last ten minutes of the half. Dana Evans was 1-9 from the field and had trouble getting in her groove. She saw less playing time during the first half, I am sure due to Coach Walz wanting to preserve her energy for the remainder of the weekend. Hailey Van Lith was able to get going in the second quarter, being one of eight players to score but the only one in double digits. She finished out the first half with two back-to-back three-pointers to help her team keep their lead going into the halftime break.

The third quarter was also a struggle on the offensive end for Louisville. They tallied 6 turnovers and scored just 13 points going 5-11 from the field. By the end of the third quarter, Louisville still had not been to the free-throw line. Wake Forest however, had been several times. They were 16-21 on free-throws by the end of the third quarter, giving us a tie game going into the last ten minutes of play. Olivia Cochran, Kianna Smith, and Liz Dixon all found themselves in foul trouble in the third quarter. Kianna Smith picked up her fourth foul early in the fourth quarter. Lousiville would finally make it to the free throw line with 5:35 left in the game, and with Liz Dixon at the line they would be 0-2. Hailey Van Lith continued to play an incredible game through the fourth quarter. She would reach a new career-high 24 points after scoring 8 in the last ten minutes of the game. The Cards saw contributions in scoring from 10 different players this afternoon, including Ahlana Smith and Ramani Parker.

In his postgame press conference, Coach Walz acknowledges the fact that Wake Forest is a tournament team. He was really pleased with the way Ramani Parker stepped up today during her 15 minutes of play. He says he has not seen that from her in practice and he hopes today was a springboard for her. Coach Walz also said Mykasa had a remarkable performance with her 8 rebounds, 4 assists, and 2 steals. On Dana Evans, he said that these are the games she will learn from. She will figure out how to do things other than score. He was pleased with some of her decision making. Coach Walz said he needs to do a better job on coaching how to get fouled and takes the blame for Louisville’s lack of free throws today.

When asked about her game play today, Hailey Van Lith said she knew she needed to hit the shots so that’s what she did when her teammates found her. On Dana Evans, Hailey stated that Dana still did tangible things to help the team today despite low scoring. Hailey also said that it’s nice to show everyone that they’re deep without Dana on the floor and it was a good confidence boost for everyone.

Louisville will move on to the semi-finals scheduled for tomorrow at noon on the ACC network. They will play the winner of Florida State vs. Syracuse.