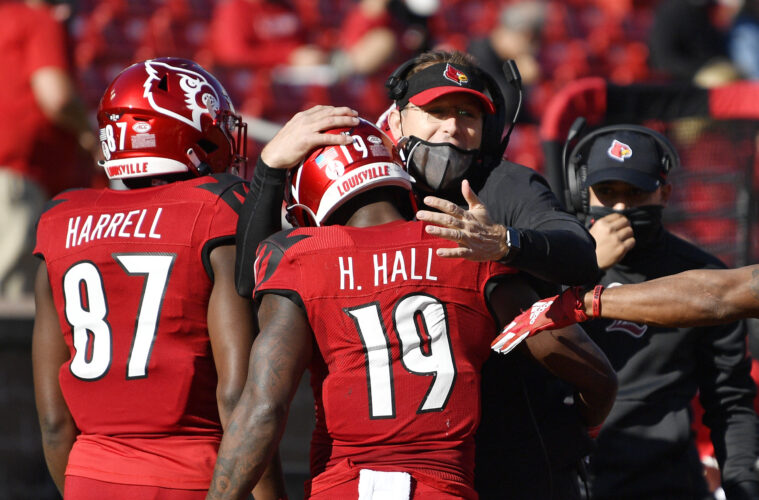 The University of Louisville won on Senior Day for the 6th time in its last 8 seasons. This senior day was a little different and perhaps a little more special than most. Players walked out alone with their families providing a message that played on the jumbotrons at Cardinal Stadium. Louisville (and other programs) getting to Senior Day is a big deal on its own, COVID-19 dealt an unfavorable blow to athletics, but somehow the administration at UofL found a way to get the Cards through all 11 games of 2020. It wasn’t easy and there were interruptions, but we got it done.

On the field Louisville got off to a slow start. A bad snap from Mitch Hall to Ryan Harwell left the punter scrambling and after getting stopped short for a 1st down, Wake Forest regained possession and easily scored.

But nothing else came easy for Wake Forest after the 1st quarter. Louisville gained just 7 yards in the opening 15 minutes and then compiled a huge 453 yards in the game. A 21-point 3rd quarter propelled Louisville to the win after that shaky start and from there the Cards really never looked back.

Jalen Mitchell had 20 carries for 168 yards, two rushes set up scores for Louisville. Dez Fitzpatrick hauled in 6 catches for 77 yards. The Cards were 7 of 14 on 3rd down conversions and held Wake Forest to just 351 yards and 4.9 yards per play. Maybe most importantly Louisville did not turn the ball over and turned over Wake Forest twice, who in the Deacons’ previous 7 games had only 1 turnover on the entire season.

Scott Satterfield did not seem to expect a bowl invite for Louisville (the NCAA allows all teams to be eligible for bowls in 2020) but also added that the program had not really discussed it.

In the off-season the Cards need to figure out a way to provide better protection from its offensive line. There were far too many negative plays in 2020. Also not enough turnovers forced and too many turnovers given. Consistency is key and Louisville was erratic for large parts of the 2020 season. Today’s game is a microcosm of Louisville’s potential and what games can look like without those mistakes…. and even the 1st quarter showcased some of that inconsistency inside a game where UofL was able to win big.