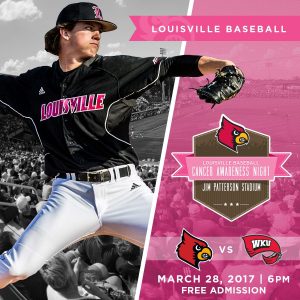 from University of Louisville Baseball marketing

After starting the season 19-0 and ranked #1 in the nation, the Cards dropped two road games in a row in last week’s 4 game road series.  The diamond Cards got back to their winning ways in the final 2 versus NC State.

Now back at home hosting in-state rival, fans and players will be familiar with one another.  “These in-state rivalries are always fun, playing Louisville or Kentucky, EKU or Murray State,” the senior Hunter Wood (WKU) said. “We’ve played with and against a lot of guys who are on Louisville. It’s good to see and compete against them, and it’s always a strong turnout by the fans.”  He will be catching behind the plate for the Hilltoppers.

The Cards are ranked #2 in the D1Baseball.com rankings.

➡️ A Raffle for a pink Louisville Slugger bat

Radio: Sean Moth with the call 93.9 The Ville

ABOUT THE WESTERN KENTUCKY HILLTOPPERS
Western Kentucky enters the week at 9-16 overall and 3-3 in Conference USA after winning two of three at Middle Tennessee last weekend. In their first season under head coach John Pawlowski in 2016, the Hilltoppers were 24-30 overall and 10th in C-USA with a 10-20 record.

SERIES HISTORY
According to Louisville’s all-time records, the series between the Cardinals and Hilltoppers is tied at 64-64 and dates back to 1924. Louisville won both meetings last season between the in-state foes earning a 17-0 victory in Bowling Green and a 14-2 win at Jim Patterson Stadium.