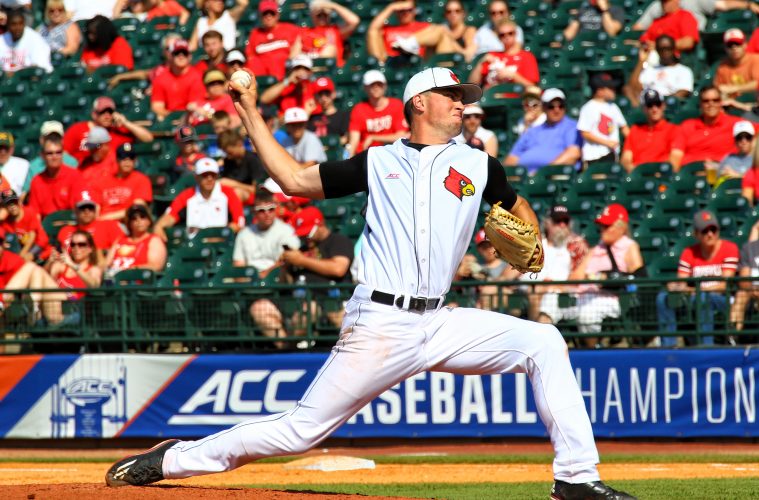 The second-seeded University of Louisville baseball team begins pool play at the 2022 ACC Championship on Wednesday and Thursday taking on 11th-seeded Pitt and seventh-seeded Georgia Tech. First pitch of both games is scheduled for 11 a.m. ET at Truist Field in Charlotte, N.C. Pool play games are televised on regional sports networks, including Bally Sports South in Louisville. Both games can be heard on 93.9 The Ville.

ABOUT THE CARDINALS
Louisville closed out the regular season with a series victory over No. 10 Virginia that helped the Cardinals clinch their fifth ACC Atlantic Division title in seven full seasons as members of the league.

SERIES HISTORY
Louisville and Pitt played a three-game series in Pittsburgh in April with the Panthers winning two of three. The Cards did not play Georgia Tech this spring.

The Cardinals have played Pitt once previously in the ACC Championship, defeating the Panthers 5-2 in the 2018 semifinals. Louisville lost its only ACC Championship meeting with Georgia Tech 9-8 in 12 innings last season in pool play.

CARDS CLAIM FIFTH ACC ATLANTIC DIVISION TITLE
With a victory over Virginia in the final game of the regular season, the Cardinals captured the 2022 ACC Atlantic Division championship.

Since Louisville joined the ACC in 2015, the Cards have five division titles. No other ACC team has more than two during that time.

The ACC has had divisions for 15 seasons. Despite having only been in the league for seven of those, Louisville owns the third-most division titles in the league.

EIGHT CARDS NAMED ALL-ACC, USHER DEFENSIVE PLAYER OF THE YEAR
Louisville collected a slew of honors when the ACC postseason awards were announced.

Levi Usher took home the conference’s Defensive Player of the Year award and was one of eight Cardinals named to the All-Conference teams. Louisville lead all programs with the eight selections and are the most for the Cards since also getting eight in 2017.

Usher was the second Louisville player to win the Defensive Player of the Year award, joining Devin Hairston who took home the first-ever ACC DPOY honor in 2017.

USHER ASCENDING LOUISVILLE’S STOLEN BASE LEADERBOARDS
Senior outfielder Levi Usher has been among the top stolen base threats in the country since his arrival on campus in 2020. Usher ranked 10th nationally with 11 steals in the shortened 2020 season, and then led the ACC and finished 13th in the country with 26 in 2021. This season, Usher is once again leading the ACC with 33 stolen bases, which is good for 10th nationally.

The Fairfax, Iowa, native has steadily climbed Louisville’s single-season and career stolen base lists over the course of the spring. Usher’s 33 bags this season are the seventh-most in program history, while his 70 career steals are currently seventh-most as well. Usher is 70-for-76 on the basepaths in 120 games with the Cardinals.

CARDINALS FEATURE FOUR DOUBLE-DIGIT HOME RUN HITTERS
Ben Bianco slugged his 10th home run of the season at Vanderbilt, lifting the Cardinals to a 1-0 victory in the Battle of the Barrel.

In doing so, Bianco became the fourth Cardinal to reach double figures in home runs this season. He joined Ben Metzinger, Cameron Masterman and Dalton Rushing with 10 or more.

NO GAME IS OVER FOR THE CARDS
Louisville has had a knack for rallying back after falling behind in games this season.

The Cardinals have now won 19 games during which they trailed, including nine of their 18 ACC victories. UofL has won six games in which it trailed in the seventh inning or later, four of which were in ACC play.

Louisville has excelled at the plate in the late innings, scoring 177 runs in the seventh inning or later and outscoring opponents 118-53 from the eighth inning on.

LOUISVILLE LINEUP SHOWING DEPTH TOP TO BOTTOM
Louisville’s offensive attack has drawn headlines for its performance this season and the Cardinals are doing it by committee with strong production up and down their lineup.

All nine of Louisville’s regulars are hitting better than .275 this season, the only lineup in the ACC with nine qualified hitters above that mark. Louisville’s starting nine all have at least 50 hits and 30 runs scored, the most of any team in the ACC in either category.

LOUISVILLE SHOWING OFF RARE COMBO OF SPEED AND POWER
Louisville’s offense has showed off its versatility this season, beating teams with power at the plate and speed on the basepaths.

The Cardinals have tallied 89 stolen bases and 84 home runs, making them one of only two teams in the country (Campbell) with at least 85 bags and 80 long balls.

All nine of Louisville’s regular starters have at least two home runs and a stolen base.

CARDINALS FEATURE ONE OF NATION’S TOP OFFENSES
The 2022 Louisville offense has been arguably the most potent in Dan McDonnell‘s 16-year tenure. The Cardinals have more runs (486), home runs (84), walks (303) and a higher on-base percentage (.416) through 55 games than any other Louisville team to this point in the season under McDonnell.

Louisville currently ranks 12th the country in scoring at 8.8 runs per game. The Cardinals rank ninth nationally in runs, 10th in hits, 12th in walks, 13th in on-base percentage, 15th in triples, 15th in slugging percentage, 20th in batting average, 25th in home runs, 29th in hit by pitch, 31st in doubles and 31st in stolen bases.