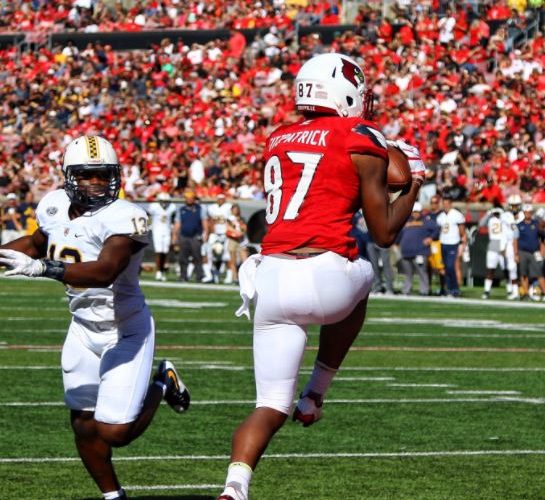 It  has been a  difficult week for Cardinal fans, but luckily they were treated to a nice distraction on Saturday afternoon.   The football team raced out to a 21-3 lead and never looked back in route to a 55-10 beatdown of FCS opponent Murray State in front of an announced crowd of 47,826.

Lamar Jackson shined again in the win while only playing one half of football. Jackson completed 18 of 26 passes for 249 passing yards, and three touchdowns, two of which went to Dez Fitzpatrick.   He also rushed 7 times for 100 yards and one score.   Jackson set a new school record with 542 points responsible for.  Per Kelly Dickey, Lamar Jackson also tied Teddy Bridgewater for 3rd place on UofL’s career list for total offense with 9,987 yards (7,019 passing, 2,968 rushing).

It was another big day for Dez Fitzpatrick who finished with 4 receptions for 45 yards and 2 scores.   True freshman Corey Reed led all receivers in yardage with 4 receptions for 94 yards.  In the second half Card fans were treated to another look at Puma Pass who completed 14 of 19 passes and his first career TD pass.   Colin Wilson was able to run for 36 yards on 3 attempts before leaving with an apparent knee injury.

Not to be outdone, the Cardinal defense smothered the Racer offense all day limiting them to 80 total yards for the game.  While they did not record a sack, they did hold the Racers to 19 rushing yards and 61 passing yards.  Stacey Thomas, Chucky Williams, and Trevon Young each tied for most tackles in the game with 5 each.

It will be a short week for Louisville as they prepare for a Thursday night showdown on the road against N.C. State.