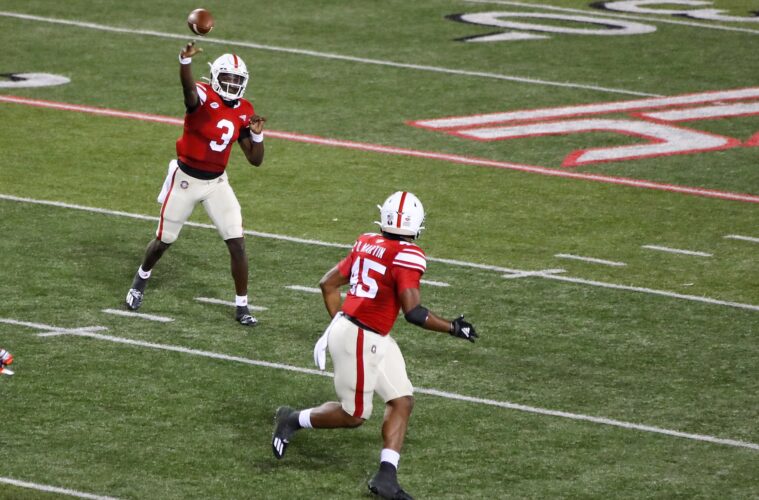 Welcome to this week’s edition of the five keys! Sorry about the one-week hiatus, I had a small personal emergency and could not find the time to get this article out. But have no fear, I am back and so are are the keys.

Louisville (3-6) comes into this game off of one of their best performances of the year, albeit against a shorthanded and, well, bad Syracuse team. But there were a lot of positives to take from the game, including a stellar performance by the defense, resulting in the first shutout of the Scott Satterfield era. Boston College (5-4) has had an up and down season (like every single damn ACC opponent) but has shown flashes of serious potential under first year coach Jeff Hafley. While Hafley is a defensive coach, BC has completely changed their “3 yards and a cloud of dust” offensive philosophy under Steve Addazio to a much more pass-oriented attack.

Without further ado, here are the keys to a Cardinal victory in Chestnut Hill.

1 & 2. Turnovers & Third Downs – I have written about both of these points damn near every week. They have to be included, but I don’t really feel like writing the same thing over and over again. Bottom line: Louisville turns the ball over too much, and doesn’t force enough turnovers on defense. Boston College is 5th in the country in total turnover margin, and 24th in turnover margin per game. Louisville has to do better. It will be a tall task against Phil Jurkovec, who has only thrown 5 picks. On 3rd down conversions, UofL allows 43% conversion by their opponents, and converts 42% of their own 3rd downs. BC is better on both counts. It always boils down to this: on offense, they have to make hay on 1st & 2nd downs and avoid 3rd and longs. On defense, they absolutely have to get the other team off the field when they force them into 3rd & medium/3rd and long. These two keys, as in most weeks, will probably tell the story of how this game plays out.

3. Kei’Trel Clark & the Louisville Pass Defense – As I said in the open, BC has transitioned to a new pass-centric offense under head coach Jeff Hafley & offensive coordinator Frank Cignetti Jr. Phil Jurkovec has been solid in his first year at BC after transferring from Notre Dame. He is helped out by a solid collection of weapons, led by his deep threat Zay Flowers. Flowers is a dynamic weapon, able to take the top of of a defense with his elite speed. He averages over 15 yards per catch and has accounted for 7 scores this year. Kei’Trel Clark will have to be the man on Saturday. Clark has been the best cover corner for UofL all season, and will need to be every bit the shutdown CB for Louisville to be successful. The safeties and linebackers will have their hands full as well, as BC boasts one of the conference’s best tight ends in Hunter Long. Long has been an animal this season, and UofL hasn’t exactly been strong against the pass through the middle of the field. Jurkovec becomes far less effective if his two biggest threats are neutralized.

4. Keep Micale Cunningham Clean – This has much more to do with Louisville than BC’s pass rush. BC is solid, averaging about 2.5 sacks per game (good for 49th nationally.) But I want to focus on Louisville here. They are giving up 2.75 sacks per game. And yes, much of that can be attributed to the inconsistent play of the line. They have been good at times, terrible at others. And you can’t really pin it on one guy. They have all had their moments. But, it isn’t all their fault. There’s a reason why looking at “sacks allowed” as the only barometer of an offensive line’s pass protection proficiency is not accurate and a little unfair. Cunningham’s decision-making has been a noticeable regression from last season. He still has oodles of ability and I am still a believer. But he doesn’t seem to be nearly as decisive with the football, leading to him holding the football too long at times. But it starts up front. BC has a pair of talented linebackers in Max Richardson & Isaiah McDuffie that are straight playmakers, as well as DE Maximillian Roberts, who actually leads the teams with 4.5 sacks. The boys up front have to keep Cunningham clean, the rest is up to him.

5. Build Off of Last Week’s Win – Sure it was just Syracuse. But a bunch of positive things happened last week. The defense had its first shutout in years, allowing only 125 yards offense and forcing three turnovers. You can argue that the defense has been trending up, especially when you take into account the Covid absences during the Va Tech & Virginia games. The team has found running back life after Javian Hawkins with Maurice Burkley & Jalen Mitchell. Micale Cunningham & the other quarterbacks spread the ball around, with eight different receivers getting at least a catch. Braden Smith led all receivers with 7 catches for 65 yards. Tutu Atwell scored a touchdown in his first game back off of injury. James Turner hit three field goals, including a 50 yarder. The point is, there was a lot of good last Friday. The Cards need to build off of all of this positive energy and turn this in to a winning streak.

This week is all about the turkey, folks. I am smoking a 20 pound bird for the delayed Scull family Thanksgiving. Normally I wouldn’t go over 15 pounds for a smoked bird, but all is possible through spatchcocking. If you’ve never heard of it, it is basically removing the backbone of a turkey and flattening it for a quicker cook. There are several tutorials online. I have a special brine I use (there are several acceptable brines, use your preferred) for the overnight soak. Make sure you fully dry the skin, so you end up with an amazing crispy skin. I also use my poultry rub & fresh herbs on top and under the skin before smoking. I will be posting the glorious results.

Just like every other damn game this year…this one is hard to call. I feel like the Louisville defense has shown that when at full strength they have developed into a solid unit. The questions lately have really been on the offense, specifically the rampant turnovers. Boston College has been inconsistent, losing by a single possession to both Clemson and North Carolina, while beating Syracuse, Pittsburgh, and Texas State by a single possession, needing OT to beat Pitt. Of course UofL lost to said Pittsburgh team, but soundly defeated the Orange just last week.

More so than a normal year, this season has been utterly impossible to predict, especially by piggybacking on past results. Teams are dealing with so much, including ever-changing roster availability and other Covid-related distractions. I fully expect to be wrong about this game. This season, even when I get the winner right, I am rarely right about how the game plays out. That being said, here is ANOTHER prediction:

If Louisville’s turnover woes continue, there is no way they win this game. I look for an evenly matched game, with Louisville’s defense playing solid enough for the offense to pull through.