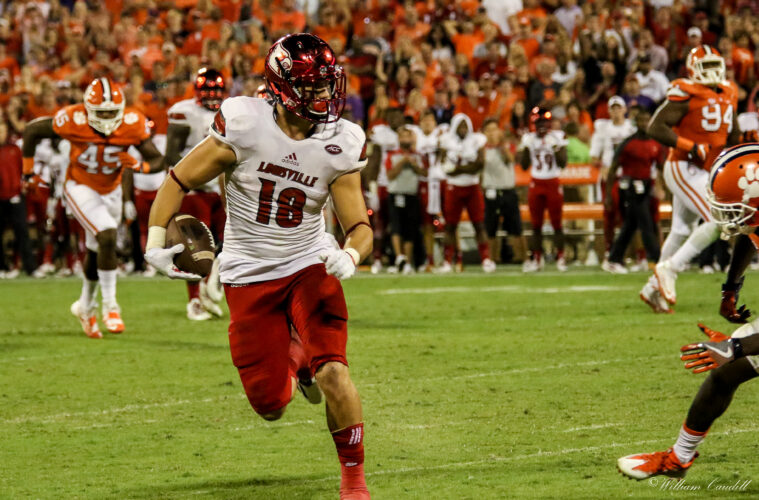 The University of Louisville has enjoyed quite a few great tight ends in school history, but who is the best?  We took a look at the best and attempted to extrapolate through the eras just who was the best tight end ever at the Unviersity of Louisville.  We took into account what the player did while playing for UofL AND what they did after exhausting their eligibility, including their total impact on the program.

Ibn Green is Louisville’s only 1st team All-American at the tight end position.  2830 YARDS!!! 33 TOUCHDOWNS!!!  Ibn is by far and away Louisville’s most productive tight end in school history.  Personally I’ll never understand why Green didn’t have an NFL career as his collegiate performance demonstrated his ability to produce.

Jaime was always good for a diving catch and was a big part of the Louisville offense.   Asher always enjoyed a productive NFL career as well and was a Pro Bowl alternate in 1997.

7) Richard Owens – 36 catches, 371 yards & 8 TDs while at UofL. More of a blocker, but was also UofL’s long-snapper during his career. 5 seasons in NFL, 17 catches, 141 yards, 1 TD in NFL with the Rams, Jets and Vikings. Coached with Bobby Petrino at Arkansas & Garrick McGee at UAB. Currently Richard is the Offensive Line coach at South Alabama.

9) Gerald Christian (ACC 3rd team, 2014) 60 catches 810 yards and 9 TDs at UofL in just two seasons. 7th round, 256th overall of 2015 NFL Draft by Arizona Cardinals. Also to not be forgotten is bringing his brother Geron Christian to UofL who currently starts at LT for the Cards and is on the Outland Trophy Watch List. 1 catch for 14 yards in NFL career.