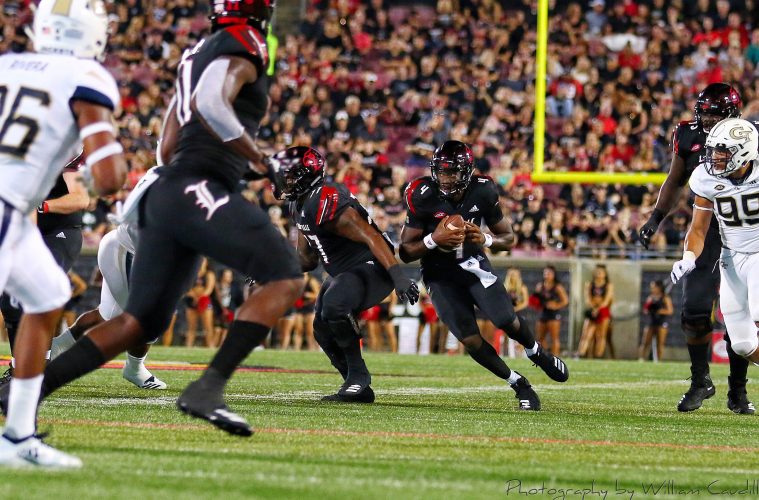 Area of Opportunity #2: Converting 3rd Down

TheCrunchZone.com is taking a look at the various aspects of Louisville Football heading into the 2019 season. You can read the first installment: Area of Opportunity #1: Run Defense here.

Louisville Football has more things to improve in 2019 than we’ve really got time for in the pre-season, but we’ll endeavor to discuss the low-hanging fruit. The Run Defense JUMPED off the page and that had to be dealt with first and foremost, next is a series of troublesome offensive stats that boiled down to one incontrovertible fact: Louisville couldn’t sustain drives offensively in 2018.

35.54% of 3rd Downs Converted is the worst over the last 16 seasons at UofL. In 2018 UofL was ranked 105th attempting to convert 3rd downs. The Cards actually were much better at home and converted 3rd downs at a rate of 40.63% which would have ranked a much more respectable 55th in the nation. However, on the road the Cards just converted 20 of 70 Third Down attempts for 28.57%. If you are wondering, 28.57% on 3rd Down would have been decidedly LAST in college football in 2018.

But there is HOPE inside the numbers. UofL actually converted 44.68% of its 3rd Downs in its THREE October games (Georgia Tech, Boston College & Wake Forest). Had UofL converted at that rate throughout the season the Cards would have finished 25th in the country converting 3rd Downs. The trouble is (and this is where people really can conclude that UofL ‘gave up’) is that in its 4 games in November Louisville converted just 26.92% of its 3rd Downs.

Part of the problem in November were the Opponents. In its 4 games in November The Cards played 3 EXCELLENT Third Down Defenses and Kentucky:

The other part of the equation is that Louisville really did quit. The Cards did play its best three 3rd Down Defenses of the season in that 3-game November stretch (Clemson, Syracuse, and NC State). Alabama was the next best 3rd Down Defense on the schedule at #24 and 34.23% and then we have to go down to Florida State at #40 and 36.50% to find the next more efficient 3rd Down defense.

How Can Louisville Improve Its 3rd Down Performance in 2019?

Louisville was 102nd in Rushing Offense in 2018. Scott Satterfield wants to run the football and his Appalachian State team was #14 in Rushing Offense in 2018. The Cards are unlikely to jump into the Top 25, but if they can get out of the basement in rushing offense and get on schedule on 1st & 2nd down running the ball then this offense will be in a much better position to convert 3rd down and keep the chains moving.

Scott Satterfield says he will commit to running the ball in 2019 and it looks like they are going to have to do that in order to be in a good position to convert.

Nothing can get going if your offensive line is allowing negative plays with a ranking of 120th+ in both sacks and TFLs. This blame lies fully on the offensive line.

Last season teams did not even attempt to challenge Mekhi Becton and instead found great success straight up the middle. Louisville’s guards and center MUST force defenses to find a different route into the Cardinal backfield or else we’ll see more of the same in 2019.

The Cards don’t have a lot of margin for error in 2019. But last season receivers were open. Whomever Scott Satterfield chooses in a given situation between Jawon Pass, Malik Cunningham and Evan Conley the Cardinal trigger man is going to have see those receivers if they are given the time up front and make the play.

Watching Appalachian State over the last few weeks one thing is clear: Scott Satterfield asks his Quarterbacks to make big plays. That will mean that the Cards will need a QB who can deliver on 3rd down and keep the chains moving.

Jawon Pass last season appeared to be over-processing or questioning what he was seeing…. or he wasn’t seeing it. That can happen when you are getting hit as often as Pass was, but he also added to the sack total by sliding out and taking unnecessary sacks instead of seeing the play or just getting rid of the ball. Malik Cunningham didn’t appear to be willing throwing the football past a certain range in 2018 and we’ll see if that’s changed in the off-season (he’s currently injured). As for Evan Conley he appears to be a gunslinger that still lacks a great deal of discretion. Conley has an arm and can definitely make the throw, but he did seem to have an overconfidence during the Spring Showcase that Scott Satterfield continues to allude to.

It’s one thing to give up a bunch of sacks. It’s another thing to give up a lot of Tackles for Loss. But when you combine abysmal metrics in Sacks Allowed, TFLs Allowed & Penalties then we have a recipe for disaster at converting 3rd downs.

Louisville was 121st in Penalty Yardage last year giving up 71.8 ypg. That’s not really very good when only gaining 352.6 offensively and allowing 483.5 on defense.

The Cards had a garden variety of penalties from game to game. And it was also a problem that got worse in November when UofL allowed 106.8 penalties per game. Bottomline, the Cards shot themselves in the foot far too often in 2018 to have any success.

Can The Cards Fix the 3rd Down Problem?

If Louisville Football wants to put 2018 behind them there are a number of “Areas of Opportunity” that must be addressed, but converting on 3rd down MUST improve. Within the 3rd Down problem are a number of other problems that contributed to the abject failure of the offense. Sacks, TFLs, Penalties, not being able to run the ball, confidence, belief, etc. All of that really contributed to the collapse.

If you are a Louisville fan the November metrics are alarming, but also encouraging if we believe that 2018 was more talented that the Cards showed. Simply put, UofL Football quit on itself and there is enough data out there to support that……… will they come together? Could they quit again? We don’t know those answers yet, but this program will have every opportunity to prove who they really are in 2019.