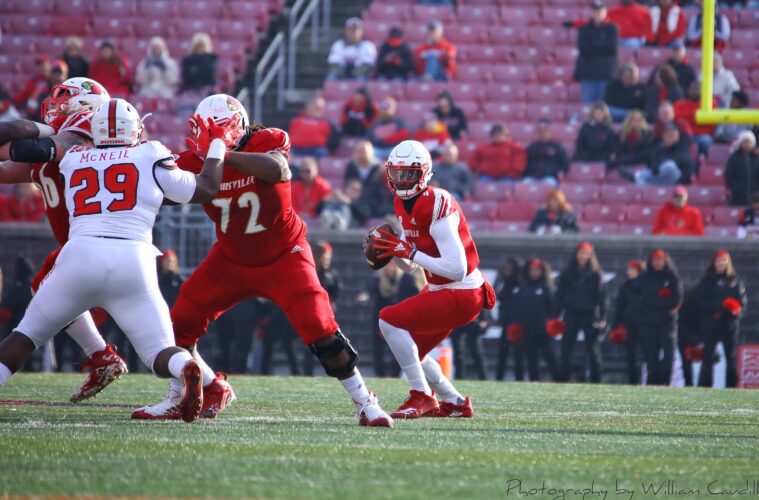 With just 16 days before the 2019 season opener versus Notre Dame, the University of Louisville football team conducted its second major scrimmage of fall camp.

Head coach Scott Satterfield conducted a 90+ play scrimmage under intense heat at Cardinal Stadium, and was pleased with what he saw from his team on the second go-around of the fall.

“I think we got better today,” Satterfield said on Saturday. “I think overall, the No. 1 offense was good today. I thought Jawon (Pass) played a lot better today, which was encouraging to see. I thought we made some plays out of the wide receiver position today. Tutu Atwell had a couple touchdown passes and we were able to run the football.”

Pass, who took all the repetitions with the first group, connected on a couple of deep throws to Atwell for scores.  He connected with speedster on a deep seam throw for one of the touchdowns, which pleased the first-year head coach.

“Mentally he was a lot better today,” Satterfield said. “He was a lot sharper in his decision making, which is the key. He was a lot more accurate today. The ball was where it needed to be today, which is a good sign in his development.”

A starter in nine games a year ago, Pass had an up-down-year in 2018, but it seems like the redshirt junior is turning the corner to being more consistent under Satterfield’s tutelage.

“I had a pretty good day,” Pass said. “I was better in my decision making and taking care of the ball. I didn’t turn the ball over at all today and we had some consistent drives. I’m taking it one play at a time and just being solid with my decision making.”

The native of Columbus, Ga., is learning a new system and he finally feels like he has grasp” of the offensive scheme and looks to keep improving and taking advantage of the repetitions to become a better quarterback every day.

“I am playing a lot freer and having a lot more fun this year,” Pass said. “I just control what I can control and try to be the best me.”

Defensively, the Cardinals were able to limit the big plays and force a few turnovers, which hopes to be a staple of defensive coordinator Bryan Brown’s defense.

“I feel like we got a little better today,” senior Cornelius Strughill said. “I felt like we improved red-zone wise by holding the offense to field goals instead of letting the offense score. We built on our performance from last week. We were in the right spot and were able to make a lot of plays.”