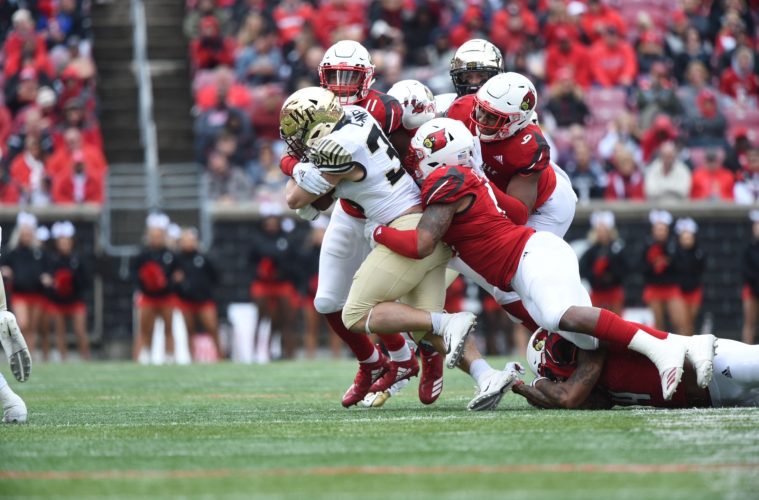 TheCrunchZone.com is going to take a look at the various aspects of Louisville Football heading into the 2019 season. We’ll get started with the Run Defense.

It’s well-documented that UofL Football struggled to get off the field last season. Teams could run the ball against UofL at a remarkable pace….. 277.25 yards per game. It’s the 3rd worst run defense in the history of recorded Louisville Football (1948) AND THE WORST YARD PER CARRY AVERAGE BY LOUISVILLE OPPONENTS EVER. Ball carriers enjoyed a generous 6.0 yards per carry in 2018. When a team decided it wanted to run the ball, Louisville obliged.

Louisville’s Run Defense was so ineffective last year that it actually shifted the truth about its Pass Defense, finishing ranked 40th. But we’ll get to the Pass Defense another time.

Louisville’s Rushing Defense was so absent in 2018 that the last time an ACC team gave up 277.25+ yards per game on the ground was Maryland in 1993 when the Terrapins gave up 317.27 ypg. The 6.0 yards per carry metric is an unfathomable reality.

It should be noted that Jonathan Greenard was hurt in Game 1 vs. Alabama and Dorian Etheridge was lost a week later vs. Indiana State. But let’s be serious, injuries are a part of football and the 2018 Louisville Cardinal Football appeared to avoid contact throughout the season, but particularly late. Take a look at the Game Log:

2019 is a season full of areas of improvement from a year ago, but there may not be an area of opportunity that could provide the biggest statistical impact than Run Defense. Looking at the game log it’s clear that this team had its struggles defensively but turned in a great run defense performance vs. Florida State and then crumbled for the rest of the season.

Even when comparing Louisville against its recent past the 2018 run defense did not measure up. From 2011-2016 Louisville had a Top 15 Run Defense 4 out of 5 times. Now from 2016-2019 UofL will be utilizing it’s 4th Defensive Coordinator in 4 seasons going from Todd Grantham, Peter Sirmon, Brian Van Gorder and now Bryan Brown.

Who is Tasked with Fixing the Run Defense?

Bryan Brown comes to Louisville from Appalachian State and will turn 36 years old the day before the Cards host Virginia in October. He’s young, energetic and accomplished in a very short amount of time. Brown played DB at Ole Miss, was a grad assistant in Oxford before moving to App State in 2012 where he coached corners. Brown was the Defensive Coordinator for the Mountaineers in 2018 and in that season APP finished 21st in Run Defense. In 2018 APP held its own against the run with a few exceptions (Penn State 44 rushes, 205 yards, 5 TDs. Georgia Southern 50 rushes 277 yards, 3 TDs. Georgia State 34 rushes 197 yards 1 TD. LA Lafayette 44 rushes 216 yards, 1 TD.)

Of those games mentioned above, Penn State is a classic college football program with the advantages of the Power 5 a lot of history and resources that Appalachian State just doesn’t have. The Mountaineers nearly stole that game. Georgia Southern jumps off the page, but running the ball is what that program does and finished 2018 as the #7 Rushing Offense in the country and Louisiana-Lafayette finished #22 in the country in the same metric. The only game that I really can’t explain statistically is the Georgia State effort, but App State won that game 45-17.

Obviously stopping the run is a team effort. Bryan Brown will coach the corners. And UofL will use a pair of linebacker coaches in with the linebackers and safeties. Dale Jones is a long-time Appalachian State assistant dating back to 1996 and will coach the Inside Linebackers. And a familiar face to Cardinal fans in co-Defensive Coordinator and Outside Linebackers Coach Cort Dennison. Coach Jones’ run defense ranks line-up directly with Coach Ivey’s so we won’t re-hash that again. But Cort Dennison was at Oregon in 2018 with the 43rd Run Defense and was with Louisville from 2014-2017 when the Cards ranked 10th, 14th, 12th and 63rd respectively during his tenure.

The last line of defense against the run will be ShaDon Brown’s safeties and we’ll examine ShaDon’s resume when we get into the Passing Defense section, although Safeties providing run support are a staple of any successful defense.