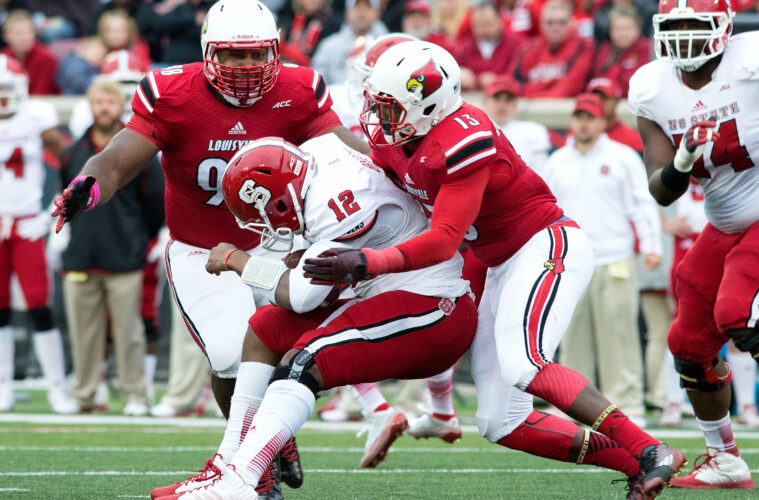 Louisville Freshman Tim Bonner is officially in the UofL Student Database as of today.  The only remaining signees from the 2015 signing class that have yet to arrive or be listed in the database are Devonte Fields, James Allen and Chandler Jones.  All 3 are expected to join the team this summer and have been assigned numbers on the Louisville Football roster on GoCards.com. A source says that both will join the team before Fall Camp.

Keith Towbridge On the Mend

Louisville junior Tight End Keith Towbridge had a similar injury to his foot that DeVante Parker endured last season.  Towbridge had successful surgery on his broken foot about 3 weeks ago, and is expected to make a full recovery well before the start of fall camp.

Former Louisville legend, Denver Bronco Ring of Honor, and current ESPN broadcaster Tom Jackson is set to receive the Pete Rozelle Radio-Television Award from the Pro Football Hall of Fame.   Jackson played for the Cards under Lee Corso before a 14-year career with the Broncos and was a 3-time Pro Bowler.  Tom has been with ESPN since 1987 and will receive his honor August 8th at the annual Pro Football Hall of Fame Enshrinement ceremony.

Junior running back Brandon Radcliff has been selected to the 79th Maxwell Award Watch List for college football player of the year. A Miami, Fla., native, Radcliff led the Cardinals in rushing last season with 733 yards and 12 touchdowns. Taking over as the starter, he totaled three 100-yard games a year ago, including a career-best 136 yards in a road win at Notre Dame. He totaled 129 yards and two scores in a 20-10 win over Wake Forest and added 110 yards and a pair of touchdowns in a win over Syracuse.

The Maxwell Award, named in honor of Robert W. “Tiny” Maxwell, has been given to America’s College Player of the Year since 1937. Maxwell’s contributions to the game of football were extensive, including time as a player, a sportswriter and an official.

Defensive end Sheldon Rankins was added to the Bednarik Award Watch List, presented to the defensive player of the year.  Moving to defensive end last season, Rankins blossomed into one of the top defensive linemen in the ACC. A third-team all-ACC selection in 2014, Rankins led the team with 8.0 sacks and 13.5 tackles for loss on one of the nation’s top 10 defenses. He also totaled a pair of interceptions.  Hailing from Covington, Ga., Rankins was credited with a career-high eight tackles, and a sack versus FIU and totaled six tackles, three tackles for loss, and 1.5 sacks in a road win at Boston College.

The Louisville Sports Commission announced that University of Louisville junior wide receiver James Quick has been named to the preseason watch list for the 2015 Paul Hornung Award, presented by Texas Roadhouse. The award is given annually to the most versatile player in major college football.

The award is named after football legend Paul Hornung, a Heisman Trophy-winning quarterback at Notre Dame and an NFL Most Valuable Player with the Green Bay Packers whose versatility earned his enshrinement in both the college and professional football Halls of Fame. At Notre Dame, Hornung played every position in the offensive backfield, handled punting and placekicking duties, returned kickoffs and started at safety on defense.

Entering his third year in the program, Quick, who made 12 starts last year, was third on the team in receptions with 36 for 566 yards and three scores, and also totaled a pair of 100-yard receiving games.

Averaging 15.0 yards a receptions, Quick caught a pass in 10 of 12 games, but emerged as a big-play wide receiver in a 34 -3 win over FIU.  The product of Trinity High School caught seven passes for a career-high 174 yards and two scores, including a 74-yard scoring reception.  He registered his second 100-yard game when he caught six passes for 101 yards in a loss to Clemson.

A native of Louisville, Ky., Quick has caught 42 passes for 639 yards and three touchdowns in 21 games at Louisville.

Louisville football opens up the season versus Auburn on Sept. 5 in the 2015 Chick-fil-A Kickoff Classic in Atlanta, Ga.