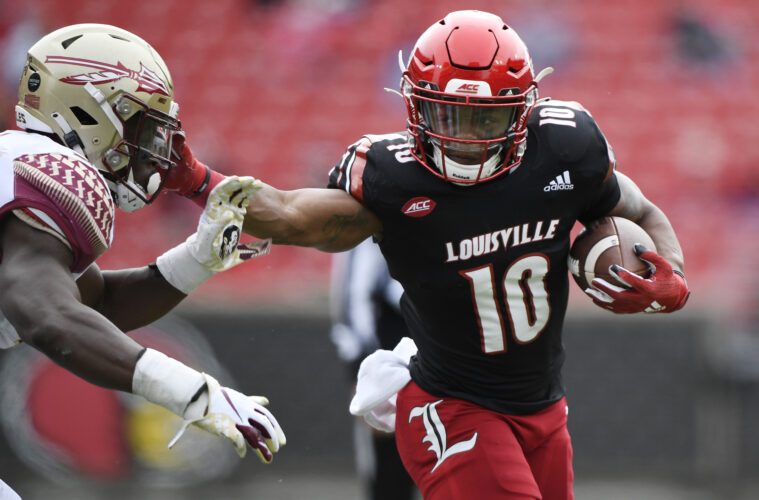 Javian Hawkins Named ACC Running Back of the Week

University of Louisville running back Javian Hawkins was named the ACC Running Back of the Week following his performance on Saturday against Florida State.

Hawkins rushed 16 times for 174 yards and a career high three touchdowns in the 48-16 win over the Seminoles, snapping a four-game losing streak for the Cardinals.

The native of Titusville, Fla. recorded his 11th 100-yard rushing game of his career, which is tied for fourth most in school history. It was also his fifth 150-yard performance – tied for the fifth most at Louisville.

Hawkins moved into 13th place on the school’s all-time rushing list with 2,226 yards.

The Cardinals remain home this weekend when they face Virginia Tech at 4 p.m.

The Atlantic Coast Conference Football Players of the Week have been recognized following their standout performances in last weekend’s games. The selections are determined by a vote of a 16-member media panel. The following are this week’s honorees:

Completed 16-of-30 passes for 312 yards and three touchdowns with no interceptions in the No. 3 Fighting Irish’s 45-3 win over Pitt • His three TD passes ranked second among all Power 5 quarterbacks last weekend • Guided a Notre Dame offense that posted 40:59 minutes of possession time, the most by an ACC team in a single game this season, and fifth-most among all FBS teams this year • Notre Dame had 11 rushing first downs against the top-ranked rushing defense in the ACC, and Book was responsible for three of those first downs, including an 18-yard dash that set up his 73-yard TD pass to Ben Skowronek.

• First Louisville player with three rushing touchdowns in a game since Trey Smith against Wake Forest on Oct. 27, 2018

• Saturday marked the 11th 100-yard rushing game of Hawkins’ career, tied for the fourth most in Louisville history

• His five career 150-yard rushing games are tied for the fifth most in school history.

Finished with career-high totals in every category in No. 11 Miami’s 19-14 win over Virginia with 10 catches for 170 yards, including a 43-yard touchdown reception on the second play from scrimmage • The 10 catches tied for the second-most by a Hurricane since Miami joined the ACC and are just two shy of the school record of 12 • The 170 receiving yards are Miami’s most versus an ACC opponent since Allen Hurns had 173 versus Pitt in 2013 and the most overall since Phillip Dorsett had 201 versus Arkansas State in 2014.

Led a Notre Dame offensive line that controlled the line of scrimmage in Saturday’s 45-3 win over Pitt • The Fighting Irish piled up 434 yards of total offense and held the football for nearly 41 minutes • Notre Dame’s 115 rushing yards came against a Pitt defense that had allowed an ACC-low 61.5 yards per game on the ground entering the contest • Notre Dame’s two rushing scores marked the first time the Panthers had allowed multiple rushing touchdowns in a single game since Oct. 5, 2019 versus Duke.

Extended his nation-leading tackle for loss streak to 23 games with a third-down sack and forced fumble in the fourth quarter of Wake Forest’s 23-16 win over Virginia Tech • Finished the game with a career-high nine tackles, including seven solo stops • Has a sack in every game this season and a sack in 12 of the last 14 games • Currently ranks fourth on the Wake Forest all-time sacks list with 20.5.

Recorded a team-leading eight tackles, a sack, a forced fumble and his second career interception in the No. 14 Tar Heels’ 48-21 win over No. 23 NC State • Named ACC Linebacker of the Week for the second time this season (also Sept. 14) and the third time in his career.

Celebrated his 23rd birthday by averaging 53.6 yards on five punts – including four of 50 yards or more – during the top-ranked Tigers’ 47-21 win over Syracuse • It marked his third straight game with a punting average of 50.0 yards or more, a career-long streak • Spiers boomed a career-long-tying 64-yard punt and also converted a fourth-and-3 with a six-yard rush.