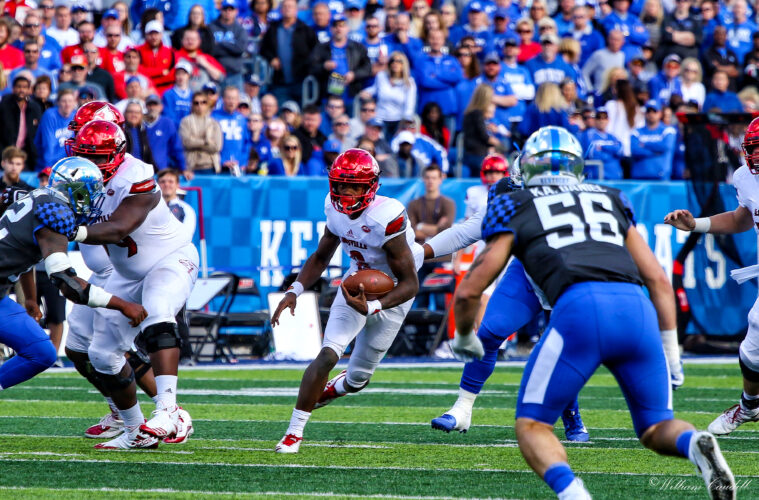 Cardinal Football is 14 days from today and open practices have concluded for the season.  Now it’s nearly time for fans to SEE THEIR TEAM!  With that being said I wanted to share FIVE Bold Predictions for what I believe may happen on offense for the Cards during 2016.  We’ll do defense when it’s ready (tomorrow or Saturday).

Lamar Jackson Will Win ACC Offensive Player of the Year

I caught a lot of flack from folks when I cast my vote for Lamar Jackson as the PreSeason Player of the Year in the ACC last month in Charlotte.  There is NO DOUBT that Clemson’s Deshaun Watson has the existing credentials to have won the award in 2015…..but this is 2016 and this is going to be Lamar Jackson’s year.  Lamar is not a finished product at all, but he has all the tools and the ELECTRICITY to grab the attention of the league.  At the end of 2016, if Lamar remains healthy, I think he’ll have the stats & highlights to win the honor.

Knowing the playbook, implementing play-action under center with a much improved running game, a more experienced Offensive Line and just the broader understanding of the concepts & responsibilities by both Lamar & his teammates is going to pay huge dividends for Lamar Jackson.  My prediction is that he’ll be in the Heisman discussion in October and will win the OPOY in the ACC in 2016.

Jaylen Smith Is Going To Have A HUGE Year

A lot has been made about Jamari Staples & Cole Hikutini.  Those two guys are going to have big years for the Louisville offense and will be drafted into the NFL.  But those wouldn’t be a BOLD predictions.  One guy who hasn’t gotten a lot of press is Jaylen Smith.   Jaylen was Louisville’s 3rd leading receiver last season as a TRUE freshman with 29 catches and 376 yards and a TD and personally I think he’ll double or better those numbers as a sophomore.  Jaylen is 6’4″, 210 lbs and really runs great routes and can catch in traffic with contact.

Jaylen was limited this Spring after tearing the skin between his thumb and index finger which limited his involvement.  But during the practices we observed Jaylen was basically the #2 Wide Receiver and he’ll be a tremendous weapon for Lamar Jackson particularly in the deep passing game.  Look for Jaylen Smith to have a breakout Sophomore campaign.

UofL Football Will Be Top 25 in Total Offense & Scoring Offense

Louisville Football was the #54 Total Offense (416.1 ypg) & the #65 Scoring Offense (28.7 ppg) in the nation last year with an extremely young offensive football team last year.  Leading receiver Jamari Staples, Wide Receiver Ja’Quay Savage, Running Back Jeremy Smith & Tight End Cole Hikutini were 1st year players to the program and leading rusher & passer Lamar Jackson was a TRUE FRESHMAN as was Traveon Samuel, Jaylen Smith, Devante Peete, Geron Christian, Kenny Thomas & Emonee Spence who all played key roles for the Cards.  Redshirt Freshman who were playing for the first time in major college football were Lukayus McNeil and Micky Crum…………………. AND ALL OF THESE GUYS ARE BACK.

In fact, Louisville Football returns all of its offensive production from a year ago EXCEPT for the 18 yards Corvin Lamb gained rushing in 2015.  Take a young team and bring all of its skill players back, mix in the sophomore bump for all of these players particularly on the Offensive Line & at Quarterback AND combine all of this with the fact that UofL was still able to gain 416.1 yards per game!!!!!  And what do you get???????  You get a big jump in offensive production!!!!!

The last time UofL Football was even close to being as young offensively as it was in 2015 was in 2011 when Teddy Bridgewater, John Miller, Jamon Brown, Eli Rogers, DeVante Parker & Co hit the stage as true freshman.  In 2011 the Cards were 103rd in Total Offense (333.0 ypg) and 99th in Scoring Offense (21.9 ppg)….in 2012 UofL jumped to 51st in Total Offense (418.8 ypg) & 50th in Scoring Offense (31.2 ppg).   There are certainly different offensive philosophies between Charlie Strong & Bobby Petrino, but the youth movement impact is still very significant from year to year.

Last season UofL Football had 27 turnovers in 13 games.  Only 8 teams in college football turned the ball over more than the Cards did in 2015.  Those 8 teams with 28+ turnovers in 2015 were a combined 27-73…… just 27 wins in 110 games!  So NOT turning the ball over is a key component to playing winning football and somehow the Cards managed to go 8-5 despite the large number of giveaways.

The Cards had 11 turnovers in its 5 losses last season.   Averaging over 2 turnovers per game is a problem that needs to be corrected.  We’ve discussed the youth movement from 2011 to 2012 when trying to project production offensively so let’s try again.  In 2011 the Cards had 22 turnovers and in 2012 UofL had just 13 (#6 in country) when bringing back a lot of young players back from the 2011 team.  Once again Charlie Strong’s offensive philosophy is much different (and less risky) than Petrino’s. But reducing the overall number of turnovers significantly is something I’m predicting for 2016.

The QB position being in flux & the youthful offensive team (and Offensive Line) greatly affected the running backs last year.  Getting Lamar Jackson under center more often and understanding the run concepts and being able to play-action is going to be a tremendous upgrade on the ground from a year ago.  When Petrino’s offenses are at their best the run game is THE factor.  Lamar Jackson will run the football, but the Cards really need to get Brandon Radcliff, L.J. Scott, Jeremy Smith, and Malik Williams going.

Louisville may not have a 1000-yard rusher in 2016, but that’s not really the prediction….. I think the Cards will gain 2600+ yards on the ground this coming year.  It’ll probably be by committee and it’ll make a huge difference in the Red Zone.