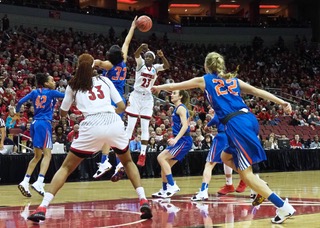 LOUISVILLE, Ky. – University of Louisville women’s basketball has released its 2018-19 non-conference schedule, which is highlighted by home games against Nebraska, Kentucky and Connecticut.

Overall, the Cardinals will face nine opponents that reached postseason play a season ago, seven that won 20-plus games and six that played in the NCAA Tournament.

“Our non-conference schedule is extremely challenging and we are excited about that,” said head coach Jeff Walz. “Our goal is to play the best to help prepare us for conference play and our schedule does that.”

Louisville opens the season at Western Kentucky on Tuesday, Nov. 6, which marks the first of five road games to begin the season. It marks the second time in three years that the Cardinals open the season on the road as they began the 2016-17 campaign at UT Martin.

They will then play at UT Chattanooga on Nov. 9 and Boise State on Nov. 19, before traveling to Las Vegas on Nov. 23-24 to play Arizona State and Hartford in the South Point Shootout.

The Cardinals return home to host Miami (Ohio) on Nov. 26 for the first of six straight at the KFC Yum! Center. Louisville will then host Nebraska on Nov. 26 in the ACC/Big Ten Challenge, Tennessee State on Dec. 2, UT Martin on Dec. 4, Kentucky on Dec. 9 and Northern Kentucky on Dec. 15.

In their final tune-up prior to Atlantic Coast Conference play, Louisville hits the road to play at Central Michigan on Dec. 20.

The Cardinals produced a program-best 36-3 record in 2017-18 as they reached their third Final Four. Louisville opened last season with a 20-0 record, which marked the best start and longest winning streak in program history, and reached as high as No. 2 in the Associated Press poll.

Louisville returns four of five starters from a year ago, including 2017-18 ACC Player of the Year and All-American Asia Durr. Durr averaged 18.7 points per game as a junior, while knocking down 108 3-point field goals and shooting 41.7 percent from beyond the arc. She has 1,743 career points, which ranks seventh in school history, and her 278 made 3-point field goals rank second.

Women’s basketball season tickets may be purchased by visiting the UofL Ticket Office, located near Gate 2 of Cardinal Stadium at 2800 South Floyd Street, on weekdays from 9 a.m. until 5 p.m. or by calling 502-852-5151.

Additional information is available online at www.GoCards.com/wbbtickets or by emailing the UofL ticket office at tickets@gocards.com.