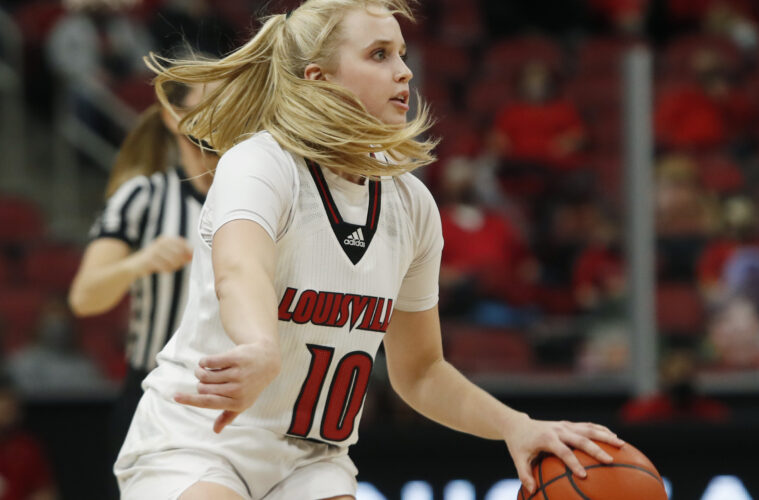 The Cards moved to 8-0 this afternoon after playing a second unscheduled game against UT Martin. Still working to get back into a normal routine and rhythm, Louisville got off to a slow shooting start, outside of Dana Evans. She was able to record 11 of the team’s 21 points in the first quarter. Hailey Van Lith also made her presence known with 3 defensive rebounds in the first quarter, which was nice to see after she had a slow day on Sunday.

Regardless of a slow shooting start, Louisville went into the second quarter with the advantage and soon began to really run away with the lead. By the time the halftime buzzer rang, 9 players had scored for the Cards and Dana Evans was sitting at 22 points. This was just 2 points shy of what the entire UT Martin team had scored in the first half. The Louisville defense had recorded 11 rebounds and forced 11 turnovers which resulted in 14 points for the Cards going into the break.

The second half started off just as hot as the first half ended and Dana Evans would break her career high scoring record with 29 points. Louisville managed to force an additional 7 turnovers in the second half, resulting in 12 points added to the scoreboard. At the end of the day, we saw 7 players get 20+ minutes of playing time and 3 players with double digit scoring in a 96-61 victory.

In his post-game press conference, Coach Walz thanked UT Martin for coming to play on such short notice. He realizes that getting these games in is very important to their rhythm and routine. The team had a strong practice yesterday, but Coach Walz stated that the team is nowhere near where they were a month ago. He says that you just can’t take that many days off and stay sharp. He also said that the more they can utilize everyone on the team, the better they will be, but sometimes you must go to the hot hand and today that was Dana Evans.

Several schedule updates were provided after the game concluded today. Louisville will travel to Virginia Tech on Thursday for an 8p.m. tip off on RSN. They have also rescheduled the Miami game for January 26th at 4p.m., and the Florida State game for February 23rd at 2p.m. Both of those games will take place at the KFC Yum! Center.