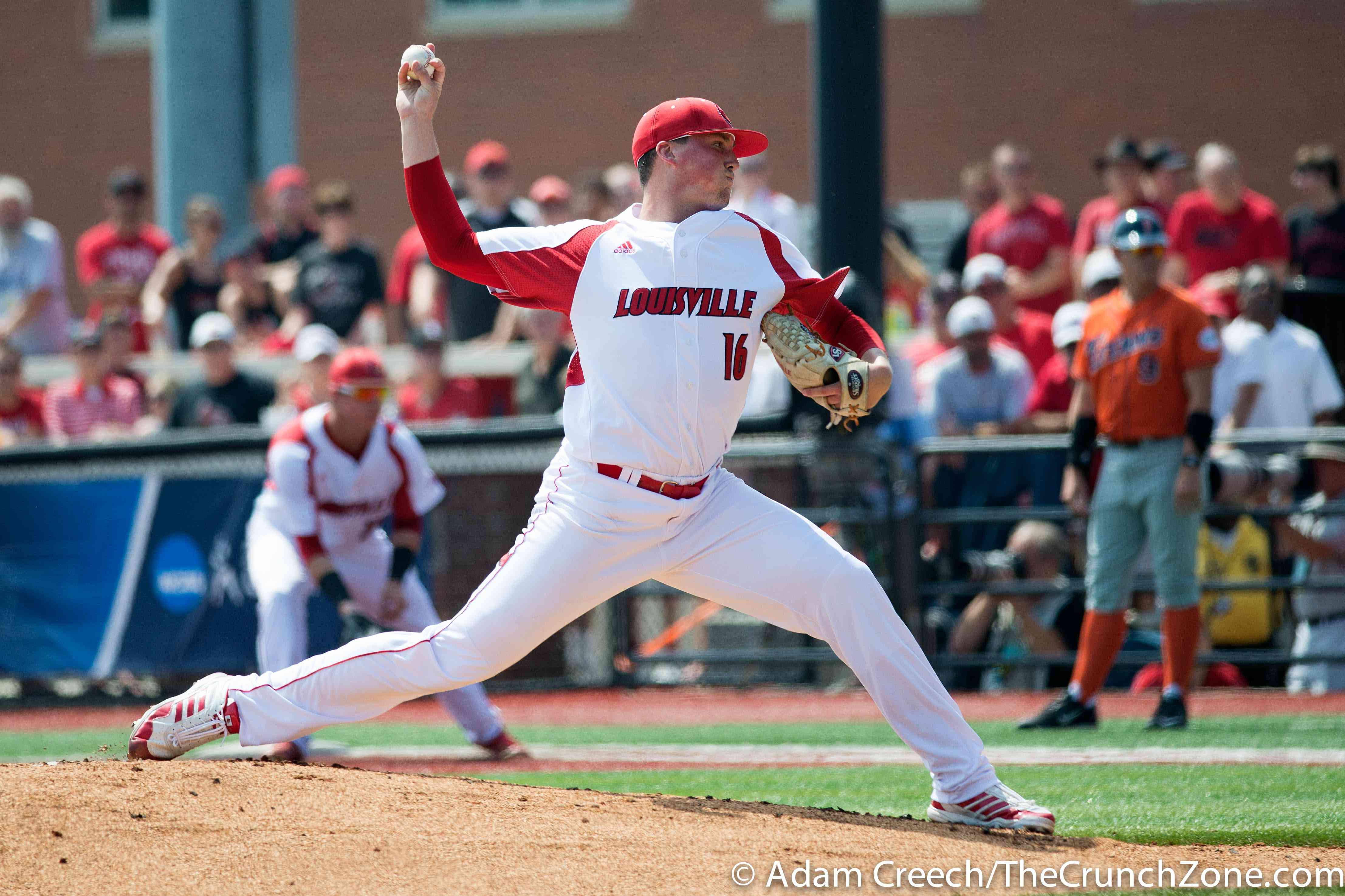 Senior righthander Kyle Funkhouser matched a career-high with 12 strikeouts to lead the No. 4 Louisville baseball team to 4-2 series-opening victory over Princeton on Friday afternoon at Jim Patterson Stadium.

Funkhouser, who reached 12 strikeouts in a single game for the third time in his collegiate career, allowed two runs on four hits with just one walk to earn his 28th career victory, one behind Louisville’s all-time leader Justin Marks (29 wins, 2007-09). It was the 14th time in his career Funkhouser, who retired the final 11 batters he faced on Friday, has struck out eight or more in a game. The native of Oak Forest, Illinois also surpassed the 300-strikeout plateau for his career on Friday while his 302 strikeouts place him just three behind Marks, Louisville’s career leader with 305.

“I wanted to command the fastball and pitch off of the fastball and I was able to have some success with that today,” said Funkhouser, who is tied for third at Louisville with 44 career starts and ranks fourth in career innings pitched with 303. “Coach (Roger) Williams challenged me to attack with my fastball, for me to do what I do, and if they hit it, they hit.”

Following Funkhouser on Friday was sophomore righty Lincoln Henzman, who turned in two scoreless innings of relief to record his first save of the season and the third of his career. The Lexington, Kentucky native has six strikeouts in four appearances and 5.2 innings of shutout relief this season.

“Kyle gave us a strong start and Lincoln provided the big finish,” said Louisville head coach Dan McDonnell. “We wanted to see Kyle control the plate with his fastball and that’s what he was able to do today. That’s the number one pitch in his arsenal and all of his success starts with commanding the zone with that pitch.”

At the plate, sophomore third baseman Blake Tiberi was 2-for-4 with one RBI, while sophomore designated hitter Brendan McKay doubled and drove in two runs for Louisville (7-2), which has registered nine or more hits in all nine games this season. Junior second baseman Nick Solak added a single, one RBI, two walks and scored once.

Louisville struck first on Friday when Solak drove in junior outfielder Logan Taylor with a two-out RBI single to left for the 1-0 lead in the third inning. Taylor moved into scoring position with a double down the left field line before being plated by Solak, who has reached base safely in 21 straight games dating back to last season.

Princeton, playing its season-opener, answered the Cardinals with two runs in the fourth inning for its first lead of the season. Nick Hernandez drove in Danny Hoy with a RBI double and Paul Tupper added a RBI single to plate Zack Belski for the 2-1 advantage.

The Cardinals regained the lead for good with a three-run fifth inning on three hits against Princeton starter Luke Strieber. McKay pushed Louisville ahead with his two-out, two-run double down the right field line to score junior outfielder Colin Lyman and Solak. Tiberi followed with a RBI single to right to plate McKay and extend his hitting streak to nine games. Strieber took the loss for the Tigers allowing four runs on eight hits in five innings.

The Cardinals and Tigers will continue their series Saturday at 1 p.m., and the weekend finale is set for Sunday at noon. Admission is free throughout the weekend at Jim Patterson Stadium.