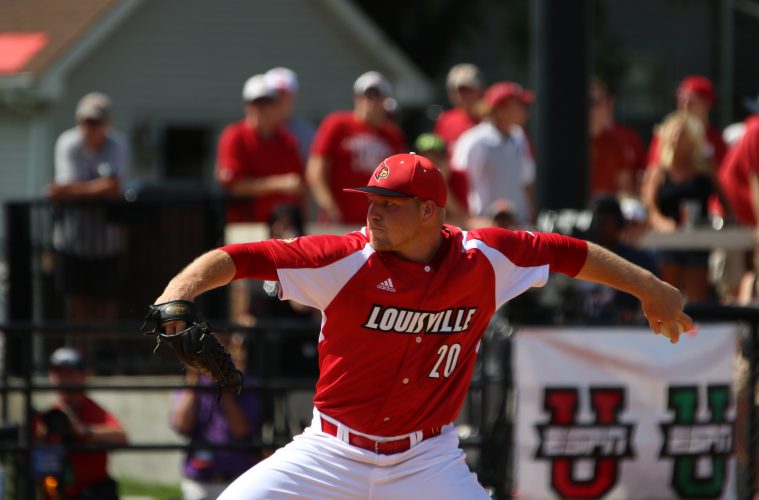 Following its record-setting opening day at the 2016 Major League Baseball First-Year Player Draft on Thursday, the Louisville baseball team added to its total on Friday as a trio of Cardinals were selected during the third and fourth rounds.

Junior lefthanded pitcher Drew Harrington led the way going 80th overall in the third round to the Atlanta Braves, while redshirt sophomore infielder Blake Tiberi went in the third round as the 100th selection by the New York Mets. Senior righthanded pitcher Kyle Funkhouser became seventh Louisville player chosen in this year’s MLB Draft going in the fourth round to the Detroit Tigers as the 115th pick overall.

Overall, the first 10 rounds of the 40-round MLB Draft were completed Thursday and Friday. The seven draft selections for the Cardinals through the first two days was bested only by the eight picks for Florida and Texas A&M. Louisville has produced at least seven MLB Draft selections in three of the last four seasons (2013, 2014, 2016), while the school record total is 10 drafted players in 2010.

Chosen as the 2016 ACC Pitcher of the Year, Harrington enters this weekend’s NCAA Super Regional with a 12-2 record, 2.08 ERA and 80 strikeouts in 16 starts and 103.2 innings pitched this season. An All-American selection, the Elizabethtown, Kentucky native has limited opponents to two or fewer earned runs in 13 of his 16 outings. In his 10 ACC starts, Harrington was 8-0 with a 1.33 ERA.

An All-ACC Third Team honoree, Tiberi has a .331 batting average with nine home runs, 48 RBI, 17 doubles and 45 runs scored while starting all 62 games this season. A native of Taylor Mill, Kentucky, Tiberi is second on the team with 27 multiple-hit games and 14-multiple RBI performances this season.

Funkhouser ranks as Louisville’s career leader in wins (35), strikeouts (376), innings pitched (380.2) and starts (56) and is a 2016 graduate with a degree in marketing. A native of Oak Forest, Illinois, Funkhouser is a two-time All-American, a former Louisville Slugger Freshman All-American and holds the school record for single season wins with 13 in 2014. This season, Funkhouser has won his last six starts and carries a 9-3 record into tomorrow’s NCAA Super Regional.

On Thursday, the Cardinals set a school record with three first round selections and four players in the first 62 picks overall. Junior outfielder Corey Ray became the highest draft selection in program history going fifth overall to the Milwaukee Brewers. He was joined in the first round by junior pitcher Zack Burdi, who went 26th to the Chicago White Sox, and junior catcher Will Smith, taken 32nd overall by the Los Angeles Dodgers. Junior infielder Nick Solak was the fourth Louisville player chosen after the New York Yankees made him the 62nd pick in the second round.

The 2016 MLB Draft concludes Saturday at noon ET with rounds 11-40. The No.2 national seeded Cardinals (50-12) open the 2016 NCAA Louisville Super Regional against UC Santa Barbara on Saturday at noon ET at Jim Patterson Stadium and the game will be televised on ESPN2.