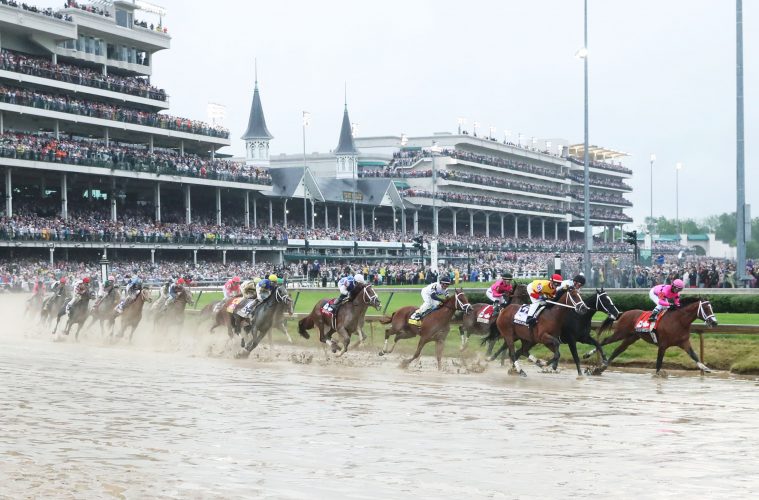 We Have Kentucky Derby 146; But Not Like We Want It

Saturday we will have the Kentucky Derby. Except we won’t have it like we really want it.

We’re going to have 3 year-olds running a mile and a quarter under the Twin Spires for the 146th consecutive year. And that’s something to be celebrated. But there won’t be a mass of humanity as the horses turn to the top of the stretch. We’ll have a Champion but we won’t have the roar.

It’s going to be the Kentucky Derby . But instead of tulips we have mums. We can’t say, “This is the first time these horse have ever run a mile and a quarter.”  We didn’t have backside doughnuts and coffee. The good-natured game Louisvillians play each year attempting to access parts of the track is now serious business.

But here we are on Central Avenue and horse racing is as much about PEOPLE as it is about HORSES. We won’t get to park in someone’s backyard this year and pass through “Shortcut Barn” to get to the Longfield Lot. But we will have great stories like yesterday’s improbable victory in the Kentucky Oaks by Shedaresthedevil.

We won’t have the golf cart rides and really, it’ll be a lot easier to manage “Who is going, where are we eating, when are we arriving, what’s the weather going to be like”…. but that’s kind of the point right? That even despite a massive amount of planning Kentuckians build a city within a city each year because it’s worth it.

And we will have the gut-wrenching stories like Thomas Drury, Bruce Lunsford and Brian Hernandez, Jr. losing their Derby shot after getting thisclose to smelling the roses. And maybe we won’t have a 22-minute inquiry.

We’re going to have My Old Kentucky Home, but we’re not going to have the University of Louisville Marching Band. We’ll have a “Call to the Post” but it won’t be from the paddock.

We’ll have the ‘Walk Over” but we won’t have anyone there for “celebratory wave” to the crowd for the moment those connections had a horse in the Kentucky Derby.

We’re going to be betting! And we won’t have to wait behind a patron making 34 different Super Wheel combinations while dropping his tickets and asking the teller to correct his tickets.

We won’t have price gouging at the hotels, but we will be watching at home trying to re-create our Derby traditions and reminiscence about Derbies gone by and the people we wish could celebrate with us.

We won’t have John Asher. But trust me, we have lots of John Asher laughter at Churchill Downs.

We won’t have the rain….. and, well, we can do without the rain.

There won’t be sundresses or suits, derby hats or fascinators. But there will be roses. And we won’t have the WAVE interviews from the infield or the paddock. Humans and laundry will be subject to significantly less mud.

We won’t have the the red carpets or false bottom coolers. Instead we will have empty halls, an empty paddock and an empty grandstand. But I can tell you first-hand the spirit of Churchill Downs is present on these grounds waiting for the moment we can all come back.

THERE WILL BE BOURBON. And we’ll need less Ibuprofen to get us through the week.

We didn’t have to jockey for position to get a reservation on Oaks night. But we will have to figure out who is bringing what to all of our respective Derby parties.

The Kentucky Derby is about the horses, yes, but it’s ABOUT US. As Kentuckians, and Louisvillians this is ours. It may not be in front of 180,000 of us and it may not be at all like we remember but if I know anything about the people of this town it’s that we make the most of what we have. And we’re going to bet, and we’re going to drink and we’re going to speculate and we’ll mark the time with the 146th Running of the Kentucky Derby………. and then we’ll do it all again like we all remember next Spring where I’m sure John Asher has requested God send an epic storm so that we all remember him.

This Derby let’s not focus on what we don’t have and focus on what we do have. Having been at the track each day since Monday, I can’t tell you how strange it has been to not see you all on the backside, in the paddock or on the bricks. A Louisvillian’s heart beats with the Kentucky Derby and hopefully we can get it all back May 1, 2021. Until then, this Louisville native is incredibly happy and sad to have the Kentucky Derby this September. I hope we can all be together again next May.