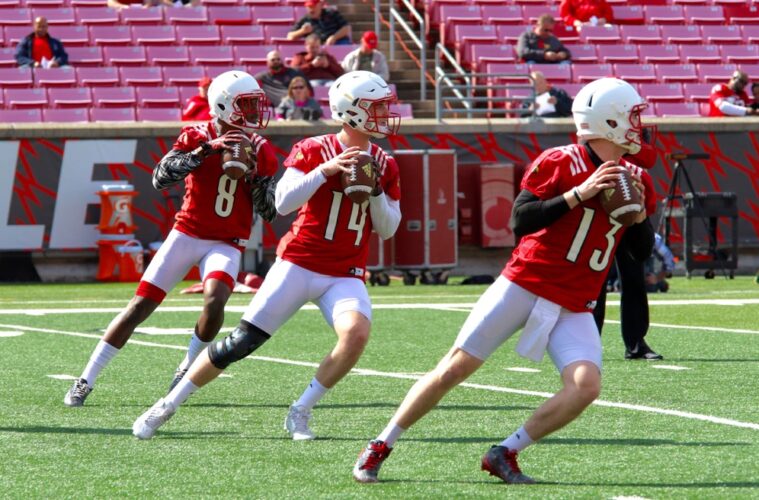 Tuesday’s Practice had perfect weather and the Cardinal Football team for its 5th practice of 2016 Spring Football.   The tempo was intense and several players definitely were affected by the hot pace late in the session.  Several things also stood out:

–Lamar Jackson.  Not a finished product by any means, but from what we can witness Lamar is certainly throwing more consistently overall.  Lamar made several impressive deep sideline throws and has improved his timing greatly.  All of this of course is without the threat of defensive contact and being able to stand tall in the pocket.  Even so, Lamar Jackson still has the ability to defy geometry and caused several defenders to play from behind when running on the edge.  Lamar is on his way and it’s exciting to see his progression in a matter of months.

–Keith Kelsey.  He’s clearly the leader of the defense at Middle Linebacker now that James Burgess and Sheldon Rankins have departed the defense.  Kelsey looks to have gotten a bit bigger and still has the ability to cover a great deal of space.

-Wide Receivers. The WR group stands out and there are no shortage of playmakers for the Cards.  Traveon Samuel wearing a #1 jersey got the ball often.  Jamari Staples is in a great rhythm already and Ja’Quay Savage caught an absolute laser beam from Lamar Jackson over the middle.  Emonee Spence also tracked down a beautiful ball deep down the left sideline from Lamar Jackson.  Lonnie Galloway hasn’t been with this group long but it’s clear that he brings a lot of intensity to the table.  Javonte Bagley also ran with the #1 group quite often and James Quick is himself making 3 great plays in a row before the 1 head-scratcher.

–Dee Smith.  At some point Dee has to get a shot playing with the #1s.  Smith had has hands all over passes this afternoon and nearly intercepted back-to-back Kyle Bolin passes.  Dee did haul in one INT on Tuesday and his play is noticeable.

-Offensive Line. No one is unseating Tobijah Hughley at Center or Geron Christian at Weak Tackle.  Lukayus McNeil has swung out the Tackle and continues his progression forward.  McNeil will be a valuable asset to the Cards whether or not UofL keeps him at Tackle or moves him back to Guard this coming Fall.  Kenny Thomas has moved inside to Guard and its clear that is his natural position.  It’s exciting knowing both the versatility and options the Cards have here.  Kiola Mahoni is missing the Spring and Khalil Hunter is working at Guard.  Hunter is another player who can play multiple spots on the O-Line.  It’s time to be optimistic about Louisville on the O-Line for 2016.

-Punter Mason King. Losing Josh Appleby hurts but there were several sessions where we were able to see Mason King work punting the football.  It’s not consistent but Mason had some real beautiful kicks.  It’s not a done deal that Mason will win the punting job this August he’ll have to compete through camp to win the job.  However, if King does punt for the Cards this Fall it appears that UofL may be in good hands.

-James Hearns & Jonathan Greenard. One big concern with Trevon Young likely missing the 2016 season has been depth at Outside Linebacker.  Jonathan Greenard seems to be coming along, but still has a ways to go to fill the shoes of Young.  One answer may be James Hearns.  Hearns is playing Defensive End but does stand up in the PESO package.  Hearns is getting to the QB better than anyone right now and will be a force this Fall.