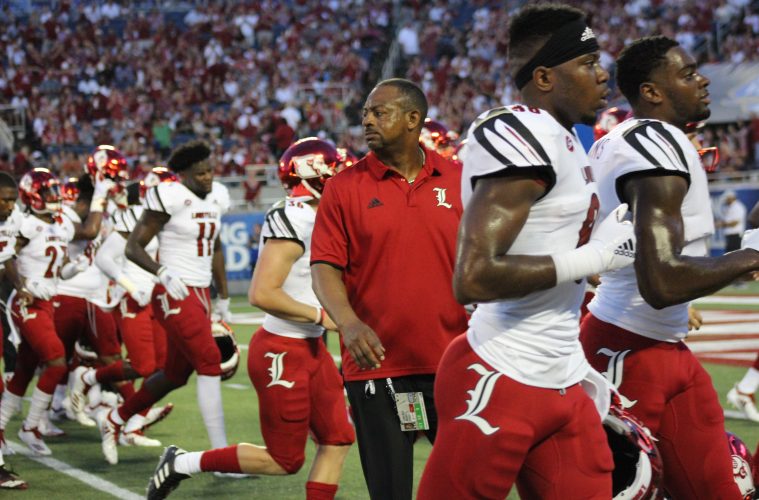 COACH WARD: Just wanted to relate that I’m excited about being in this role to lead these players for the next two weeks. Our goal is to try to make the situation into the best situation we possibly can and have fun and hopefully win these last two ball games of this season.

I think the bottom line is, with this team you want to make sure you send the seniors out — we have 11 — on a good note and for all these young men that are still going to be part of this program to experience some winning. They’re not around here lately and it’s something that we’re not used to.

So the thing that we’re trying to do as a culture here is to create a fun environment at practice, get the guys to show a lot more energy and enthusiasm and some competition. And I think we did that last night. I thought our longest practice of the week last night and I thought that the guys responded and we had some exciting situations that occurred in practice.

And that was all orchestrated to try to create the energy and to get the players to continue to — even though working on techniques and fundamentals — but have some fun.

And there’s going to be a dogfight, playing North Carolina State. Coach Dave Doeren has done a great, job great football team. Looking on them on both sides of the ball they’re really good. The offense is very explosive. Got great receivers, but I think the key to the offense is the quarterback. I think Mr. Finley does an excellent job running that system that they have in place. And he has a great group of receivers around him and probably one of the best offensive lines that we face.

Anytime a quarterback can throw the ball as many times as he has and only been sacked five times, there has to be protection. So they do a great job with their front. So we’ve got a tough job on defense in stopping those guys.

And defensively they’re very sound and athletic and does a good job. They challenge you.

And so this will be a great task for us on Saturday. But hopefully our young men will come out, since we’re at home, and come out and play and show these fans that we can play football the way Louisville is used to playing football.

Q. When you look back in your coaching career, what stands out to you about the time you spent at Virginia Tech?
COACH WARD: A great work environment. I think Coach Beamer is one of the greatest head coaches that have been in this profession. And the way he conducts the business at Virginia Tech it was second to none. And you know you had a man that supported you, believed in you, was able to teach the young men that you were coaching and he allows you to do your job.

So I have nothing but the utmost respect for Coach Beamer. And having an opportunity to work with Bud Foster and all those guys, Charley Wiles, guys that was at Virginia Tech for a long time when they was there with Coach Beamer. It’s one of my favorite places and favorite jobs I’ve ever had.

Q. You mentioned trying to get the fun back into practice and game preparation. Just curious how you try and do that now that you’ve only got a couple games left here, and how disappointing the season has been to this point?
COACH WARD: Well, again, I think you have to be creative. Anytime you lost seven games in a row you’ve got to find a way to motivate the young men because the season hadn’t gone the way they thought it would go in the beginning. And so you have to be creative as a coach and create some situations that can generate excitement. And that’s what we’re trying to do here in the practices.

We did it last night. We’ll do the same thing again today. Again you’ve got to find ways as coaches to motivate young men to give forth their best effort.

Q. Can you give us an example of some of the things that you did or said to try and motivate them?
COACH WARD: Again, what we did, one of the things we did, and I told them in the team meeting, when they heard the same song we played that song it would be a sudden-change situation, and what we did yesterday is we played the song, and I told them where they would all report to and they did. And we went and did a sudden-change situation where we played in overtime. Put the ball on 25 and we line up and we play.

And it was a very competitive situation. And the guys enjoyed it. And then earlier in practice we went through individual. After individual I blew a whistle did a callout session. Called an offensive linemen out and put one of our defensive linemen in we and went one-on-one. And then I called out a tight end and a linebacker, we went one-on-one. And did the same thing with the DBs and receivers. And the guys really liked that. They liked the competition. It was a great deal.

Q. What could you say, kind of going off that, your biggest challenge has been with this team in taking over this team at this point in the season?
COACH WARD: Well, again it’s motivation. Again, if you are used to winning and you’re not doing it — and losing seven ball games in a row is something uncommon, been a long time since that happened here. You have to understand that these kids are experiencing something they didn’t ever experience before.

Q. For you just the mentality of the game, the mental side of this game and the importance of that, just what you could say about instilling that, and if you feel that that’s something that you keyed in on is trying to kind of corral everybody together to have a solid mental state and how important that is moving forward?
COACH WARD: No doubt about that. The main thing we’re trying to sell to these young men, we want to make sure that the 11 seniors we have doesn’t leave this program on a nine-game losing streak. The only way to control that is if we try to get a win on Saturday and beat NC State.

So they want to make sure they try top send these guys out the right way and they want to make sure they go into the offseason with a positive feel for themselves. And no matter who is the next head coach at this program is these guys need to have experience in winning. So that’s why we hope we’re doing some things that can create the environment that they go out and play as well as they can possibly play and have a chance to win the game.

Q. You can’t go to Amazon and buy an interim head coach textbook. Did you reach out to anyone, any colleagues, or anyone who might have even been in this role at other schools to take their temperature and get some advice?
COACH WARD: Actually, I didn’t. I was telling the guys and the staff and I told the players. You know, this is the fourth time I’ve been in this situation where the head coach has been let go or the head coach retired, in the Spurrier case. And being at Fresno a few years ago, six games left in the season, the head coach gets fired.

So I’ve gained information from those experiences. And so I felt like I knew what these young men needed to uplift them. So I really didn’t reach out to anyone. So hopefully the knowledge that I had prior to being in this situation, being it’s the fourth time I’ve been in it, hopefully that information that I’ve gained in that period of time will help these young men through these last two games.

Q. Were there specific lessons that you learned in those situations?
COACH WARD: Well, again, I think if you reach out to people outside of the program that don’t really know what’s going on, you can get some good advice but it might not be the right advice for the particular situation. And me being here present in this situation and seeing these young men every day, so I think I gained enough information from just being in the situation to help try to change what was going on.