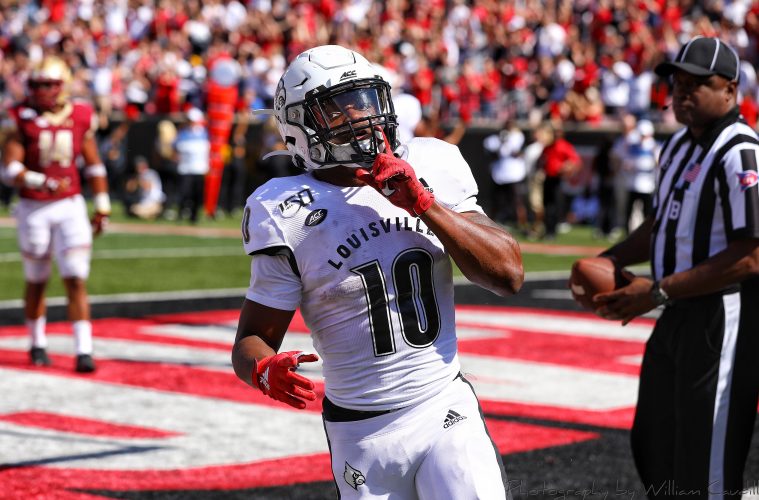 After snapping a nine-game conference losing streak, four University of Louisville football players were named the Atlantic Coast Conference Players of the Week on Monday.

Javian Hawkins was tabbed the Back of the Week; Seth Dawkins was named the Receiver of the Week; Blanton Creque was voted the Special Teams; and Mekhi Becton was selected the Offensive Lineman of the Week.

A native of Titusville, Fla., Hawkins rushed for 172 yards on 25 carries, scoring on a three-yard touchdown run in the second quarter of the win over Boston Colege. It was the third 100-yard game this season for Hawkins, who is third in the league in rushing at 112.40 yards per game.

Dawkins exploded in the win over Boston College, catching six passes for a career high 170 yards and a touchdown. He put the Cardinals up 14-7 with a 59-yard reception and also added a 77-yard catch later in the game.

Creque kicked two field goals in the win, including a 41-yard field goal with 1:02 remaining in the game to give the Cardinals a 41-39 victory. He also hit from 34 yards in the third quarter.

Becton, the team’s starting offensive tackle, was a key component in the Cardinals accumulating a season high 664 yards of total offense, including 236 yards rushing in the 41-39 victory over Boston College on Saturday.

The Cardinals return to action on the road Saturday for a 7:30 p.m. kickoff versus No. 19 Wake Forest that will be televised on the ACC Network.

The Atlantic Coast Conference Football Players of the Week have been recognized following their standout performances in last weekend’s games. The selections are determined by a vote of a 15-member media panel. The following are this week’s honorees:
QUARTERBACK & FRESHMAN – Sam Howell, North Carolina, Fr., QB, Monroe, N.C.Set UNC freshman records for completions (33), attempts (51) and yards (376) while tying the touchdown record with four in the Tar Heels’ 38-22 victory at Georgia Tech • His 376 yards passing were the most by a Tar Heel since Mitch Trubisky went for 439 yards against Florida State in 2016.
RUNNING BACK – Javian Hawkins, Louisville, R-Fr., RB, Titusville, Fla.Ran for a career-high 177 yards on a career-high 25 attempts in Saturday’s 41-39 win over Boston College • Became the third freshman in Louisville history to have three 100-yard rushing games in the first five games of a season, joining Victor Anderson (2008) and Lamar Jackson (2015) • First Cardinal running back with three 100-yard games in a season since Brandon Radcliff in 2016.
RECEIVER – Seth Dawkins, Louisville, Sr., WR, Columbus, OhioHad career highs of six catches for 170 yards in the Cardinals’ win over Boston College • Productive day included a 59-yard catch for a touchdown and a 77-yard reception • Averaged 28.3 yards per catch.
OFFENSIVE LINEMAN – Mekhi Becton, Louisville, Jr., OT, Highland Springs, Va.Had seven knockdown blocks and graded out at 85 percent in the Cardinals’ win over Boston College • Spearheaded a Louisville attack that totaled 664 yards of total offense, including 236 yards on the ground • Did not allow a sack.
DEFENSIVE LINEMAN – Patrick Jones II, Pitt, Jr., DE, Chesapeake, Va.Facing a Duke team that had surrendered just one sack in its first four games, Jones collected two in one evening • Each sack forced a critical fumble that Pitt recovered • First sack set up the Panthers at the Duke 7-yard line for an eventual touchdown and a 26-3 lead • His final sack and forced fumble with just under 30 seconds remaining sealed Pitt’s 33-30 win • Jones had six total tackles and an additional quarterback hurry.
LINEBACKER – Rayshard Ashby, Virginia Tech, Jr., LB, Chesterfield, Va.Led the Hokies with 11 tackles, including six solo stops, in Saturday’s 42-35 win at Miami • Ashby’s day included his third quarterback sack of the season and two tackles for loss.
DEFENSIVE BACK – Paris Ford, Pitt, So., S, Pittsburgh, Pa.Collected a game-high 12 tackles and intercepted two passes, returning one for a 26-yard touchdown in Pitt’s 33-30 win at Duke • Interception return for a score was the Panthers’ first since 2016 • Just two plays after his touchdown, he intercepted Duke again, and the Panthers parlayed the turnover into a field goal • First Pitt player with multiple interceptions in a game since 2013. SPECIALIST – Blanton Creque, Louisville, Sr., PK, Shelbyville, Ky.Connected on field goals of 34 and 41 yards in the Cardinals’ 41-39 win over Boston College • The latter kick accounted for Louisville’s winning points with 1:02 remaining in the game • It marked the second game-winning kick of Creque’s career.