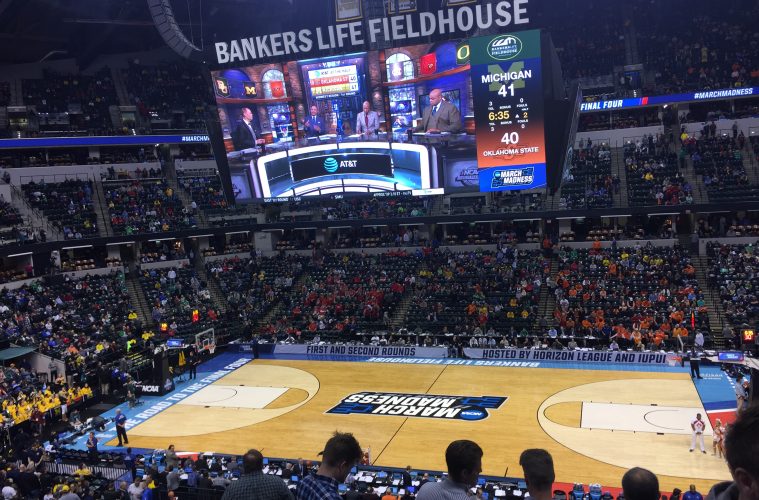 THE MODERATOR: We will begin with an opening statement from Coach Harper and then take questions for anybody up here. Coach?

COACH HARPER: First and foremost, just awfully proud of our guys. I think the entire country got an opportunity to see how hard they play.

Unfortunately, today, we didn’t — the game was determined by our inability to rebound the ball. It wasn’t because of a lack of effort. Their length and their athleticism caused us some problems.

But it was definitely not a lack of effort, and I told the guys in the locker room, couldn’t be more proud. First trip ever for Jacksonville State to the NCAA tournament. I think we represented our university, our city, and the LVC in a class manner, which we said we would. And the bar’s been set. Hopefully we can do it again here some day soon.

Q. Ray, obviously, Giga had a great game. Can you talk about what he showed the country today?
COACH HARPER: I think it’s the first time in a long time, and these guys will tell you, I don’t say anything that I wouldn’t say to them in my office, that I saw him after practice, and he and Coach Richardson was getting shots up constantly.

I think it showed today that he’s got a ton of ability. The sky’s the limit for him. Now we’ll see how hard he wants to work in the off-season and how good he really wants to be. The same goes for the two sitting right next to him. They’re very talented.

We got a taste of it. Let’s see how much these guys really liked it.

Q. Coach, if you could comment on the shirts, the Create Yours, is that like a slogan or a philosophy you had this season?
COACH HARPER: No. That’s from Adidas. Each of the

Adidas teams are wearing those. Create your own destiny is us. Again, guys, we were picked 12th out of 12 teams in our league, and we’re here playing today and had a chance. I mean, we were right there, had the game down to nine, and the ball kept getting bobbled around.

There’s a lot of possessions, but that one was key. I felt like we came up with that ball somehow. We were gaining confidence with each possession. I just felt like one of these guys would make a play, and we’d get it to six or seven.

We talked about yesterday let’s get this thing under the four-minute mark with a chance to win it, and let’s see what happens.

Q. Norbertas, can you just again talk about what you had going out there today, what you saw, how you were able to do what you did today?
NORBERTAS GIGA: My teammates kept finding me. I kept shooting. The ball kept going in. Although I think we did a good job in the first half, we gave too many offensive rebounds. That’s what kept them in the game.

I think we fought, which is — Louisville is a good team, and I think they’re going to go far this year.

Q. Ray, they had Adel on Malcolm today, and it looked like he had some struggles with that. Can you talk about that matchup and how much it meant to you offensively?
COACH HARPER: I thought Malcolm played awfully well. I mean, he had 12 points, 6 assists. He only turned it over twice. We asked a lot of him and Tyrik. I looked at him in the huddle one time. He wasn’t going to tell me that he was tired because he didn’t want to come out of the game, I know that, but their pressure is tough.

He fought it. I couldn’t be more proud of the way he played. I mean, he competed his tail off. He can tell you he got tired. He might tell me the truth now. He knew if he told me the truth, he’d probably come out.

I’m proud because I know what Malcolm’s about. I don’t know how tall he is, but I know he’s got a big heart. The same with the little guy down there on the end, he’s got a big, old heart, and I love guys like that.

Q. One thing that everyone knows about Louisville is that they are defensively sound. It seemed like the press proved pretty difficult as well today. Can you talk about the challenge of Louisville’s press and maybe what you did, Coach, to collaborate or to go against that in your offensive strategy?
COACH HARPER: There were a couple of stretches where we didn’t handle it. It’s all about just pressuring the inbounds pass. I thought we missed over the top a few times. I think you got to pop them over the top.

We didn’t do it. We got Giga one time over the top. But for the most part, I thought we were pretty good. We had a couple of violations. G forgot he couldn’t run one time. He thought he was still playing over in Lithuania or Latvia or wherever, where they can do whatever they want.

I just told you, you couldn’t run. Anyway, the guys were good. I mean, again, Malcolm was the one. He and Tyrik had to take it out and face that pressure. I thought they made good decisions. We talked all week about don’t panic. We’d rather get a five-second call than have a live ball turnover because that’s where they turn them into points.

I would have told you, they’re not out-rebounding us like that. Even though they’re a great rebounding team, I would have never thought that.

Q. Malcolm, as a veteran player, who was back from last year and coming back next year, can you talk about the foundation you guys have laid for beyond this year?
MALCOLM DRUMWRIGHT: We have higher expectations. We plan to come back and plan to win some games. So we’ll be back.

Q. Tyrik, you were one of the few guys that was able to attack the basket. Can you talk about that a little bit as well?
TYRIK EDWARDS: Every day in practice, Coach Harper talked to me a lot about taking — like when I got bigger players on me, like use my speed. So that’s what I was doing.

TYRIK EDWARDS: Like Malcolm said, I figured they were going to make a run. They did eventually. I felt like we had to stay calm and keep playing like we were.

Q. Coach, could you talk a little bit about Tucker’s job on Mitchell? He didn’t score until like maybe the last two, three minutes of the game.
COACH HARPER: I thought we did a good job on him. He got in the paint late, and they’re terrific offensively. They run a lot of misdirection. They’re good. They’re very, very efficient in the half court. I thought our defense was pretty sound for the most part.

They got us early in the second half with some duck-ins. But for the most part, I would take how we played defensively. These guys will tell you, our defense is not about one-on-one defense. It’s a team game. We have to cover for each other, and I thought we did that for the most part.

We gave up some middle drives, which hurt us late in the second half. For the most part, we were pretty sound defensively.