THE NCAA’S NOT SO HIDDEN AGENDA 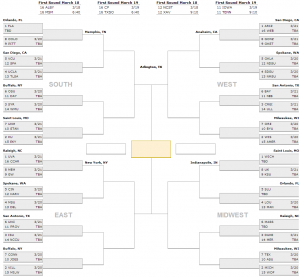 The only thing worse than the NCAA selection committee’s seeding of the University of Louisville basketball team is their insistence that any potential storylines are just a coincidence.  While some would argue that you couldn’t seed a tournament without storylines, this year’s tournament selection committee seems to have gone out of its way to make the tournament a made for television spectacle.  (Obviously in Louisville this was an unnecessary step.)  How do we know theses are not mere coincidences, let’s examine the obvious.

First of all, the matchup with Manhattan – Once you get past the idea that Louisville is the 13th best team in the nation, and that is a lot to get past, you then examine why the committee matched up Louisville with the Jaspers.  The answer is the obvious.  Pupil vs. the teacher with very similar styles of play.  Manhattan is Louisville light.  This will be an up-tempo styled game and it will be a made for television event.  Even if you are just moderately interested in college basketball, this will be a fun one to watch.  The winner in this game is CBS.

Next, simply look at the potential matchups for later rounds if the chalk prevails.  Louisville would likely play Wichita State in the Sweet Sixteen in Indianapolis.  Who was the last team to beat Wichita State?  That’s right, it was the University of Louisville.  In case UK can pull off an upset in the second round, you have another made for TV matchup with Louisville v. Kentucky for a chance to go to the Elite 8.  Winner again, CBS and the ticket brokers in Indianapolis.

Let me be clear, I am not against the television matchups and the storylines.  I am against the idea that we as fans are all supposed to be stupid enough to buy into the random nature of it all.  That being said, now is time to lace em up and go play ball.