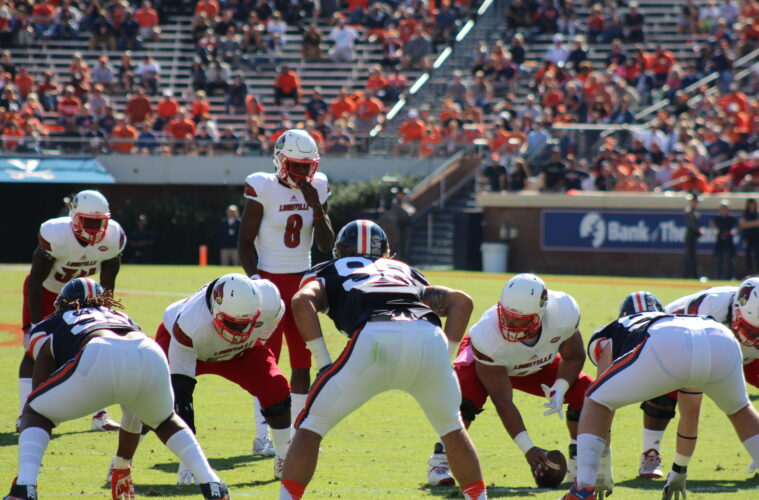 The Cardinals’ road to the playoffs remains open.  The Big-12 has virtually no chance at putting a school in as formerly undefeated Baylor and West Virginia were cannibalized by fellow Big-12 teams Texas and Oklahoma State.

Nebraska was undefeated coming into Saturday.  Such is no longer the case as they threw the game away off Tommy Armstrong’s back foot in overtime.

When the totally irrelevant inaugural playoff rankings come out Tuesday, I fully expect Louisville to be ranked fifth behind Alabama, Clemson, Michigan, and Washington, in that order.

Here is my take on the current state of affairs.

Some Louisville fans were rooting for FSU to beat Clemson last night,  whether they thought an FSU win would bolster their resume, or maybe Clemson would fall behind them in the polls, it’s all irrelevant now.  FSU lost last night, but that’s not a bad thing necessarily.  Louisville’s only defeat has come to a Clemson squad that has defeated three ranked teams in Louisville, Auburn, and FSU.  Louisville’s best win was a total devastation of an FSU team that is now 5-3.

If FSU would have won, the argument would have shifted to Louisville claiming they barely lost to Clemson in Death Valley and obliterated an FSU team that knocked of the only team that they almost beat.  Yeah that sounds good on paper but do you really think two one-loss ACC teams are going to make the playoffs? I don’t, and you shouldn’t either.

As things stand, Louisville has the second best quality loss of any one loss team in the country, behind Texas A&M.  Unfortunately, Louisville’s best win comes against a 5-3 FSU team currently ranked 19th in both the AP and Coaches polls.  The way I see it, it’s better for Louisville’s only blemish to come from a close road battle in Death Valley against and undefeated ACC Champion Clemson squad, rather than their best quality win to come against an FSU team that diminished their best loss and may still end up finishing with three losses.  Pick your poison I guess, but that’s the way I see it.

Moving out of the ACC, the Big-12 schools are now all but eliminated from contention along with Nebraska out of the Big-Ten.  Now the biggest threats to Louisville’s playoff chances are the the four undefeated schools, Texas A&M, and Ohio State.

I still think there’s a good chance Washington suffers a loss to either USC or Washington State, and possibly both.  Plus they may very well face Utah again in the Pac-12 championship game, it’s very hard to beat the same team twice in one season.  While Washington is ahead of Louisville for now, I don’t think that will be the case in late November.

Assuming Washington takes a loss, preferably two, the Big-Ten problem still remains.  Every Lousville fan should be rooting for Michigan to win out.  If they do, they lock up a spot they already occupy in the playoffs and Ohio State is out. If Ohio State beats Michigan and wins the Big-Ten, the picture becomes nebulous and who knows what shenanigans will unfold.  For the sake of Louisville fans’ collective sanity, just root for Michigan to win out.

With Washington and Ohio State out in this hypothetical, Texas A&M has a very good chance to finish the season with one-loss if they can defeat LSU in the Bayou in November.  I believe if both A&M and Louisville both finish with one loss, the Aggies get the final playoff spot.

Think about it this scenario:

Texas A&M finishes with one loss with wins against LSU and Auburn on the road and their only loss coming against undefeated SEC champion Alabama.

Louisville finishes with one loss and wins against FSU and Kentucky in Papa John’s and Houston on the road with their only loss coming from undefeated ACC champion Clemson.

While I’m on the record saying the Committee wants to put Lamar Jackson in as many homes as possible, it is really hard to see them putting one-loss Louisville in over one-loss Texas A&M.

Florida also has a mathematical chance but I find it highly unlikely they survive LSU in Baton Rouge, Florida State in Tallahassee, and the SEC West (Alabama) opponent in the SEC Championship.

So if you’re a Louisville fan here is what you are realistically rooting for, outside of your ‘Cards winning out of course:

2.) Michigan. You need them to knock off Ohio State, thereby eliminating the Buckeyes from contention.

3.) LSU.  LSU has two losses so they are out if the ‘Cards finish with only one. Also, if LSU beats Alabama this weekend it makes A&M’s “quality loss” look weaker than Louisville’s.  Bottom line is that the Aggies cannot finish with one-loss to an undefeated Alabama team.  That would make the committee choose between a one-loss ACC at-large team and a one-loss SEC at-large team.  You all know how that is going to end.

4.) Kentucky. Yup, you heard me correctly.  Kentucky looks like it may be Louisville’s second best quality win this year.  The Cayuts have two very winnable games coming up against two vastly overhyped preseason darlings in Georgia at Commonwealth Stadium and Tennessee ay Neyland.  While I fully expect Kentucky to blow both of those games, if they come into Louisville 8-3 boasting a top 25 ranking they will be UofL’s third best opponent of the season.

I told you college football was nothing but chaos and now Cardinal fans need to be rooting for UK over the next three weeks.

5.) Houston.  The Cougars have to find a way to play inspired football even though they know their coach is leaving and they have no shot at a New Year’s bowl.  Unfortunately for Louisville, they may treat the Cards game like their bowl game and come out lit to the gills.  Louisville has to crush their souls early in this one or Houston may knock them off.

That pretty much covers everything I think.  The first order of business is for Louisville to win every game, obviously.  Style points are great and everything, but the bottom line is a win is a win is a win.  Some of the smoke has cleared with the Big-12 virtually out of the picture, leaving the four teams ahead of Lousville, Ohio State, and Texas A&M as the biggest threats.