Smallball has Louisville Baseball One Win Away from College World Series 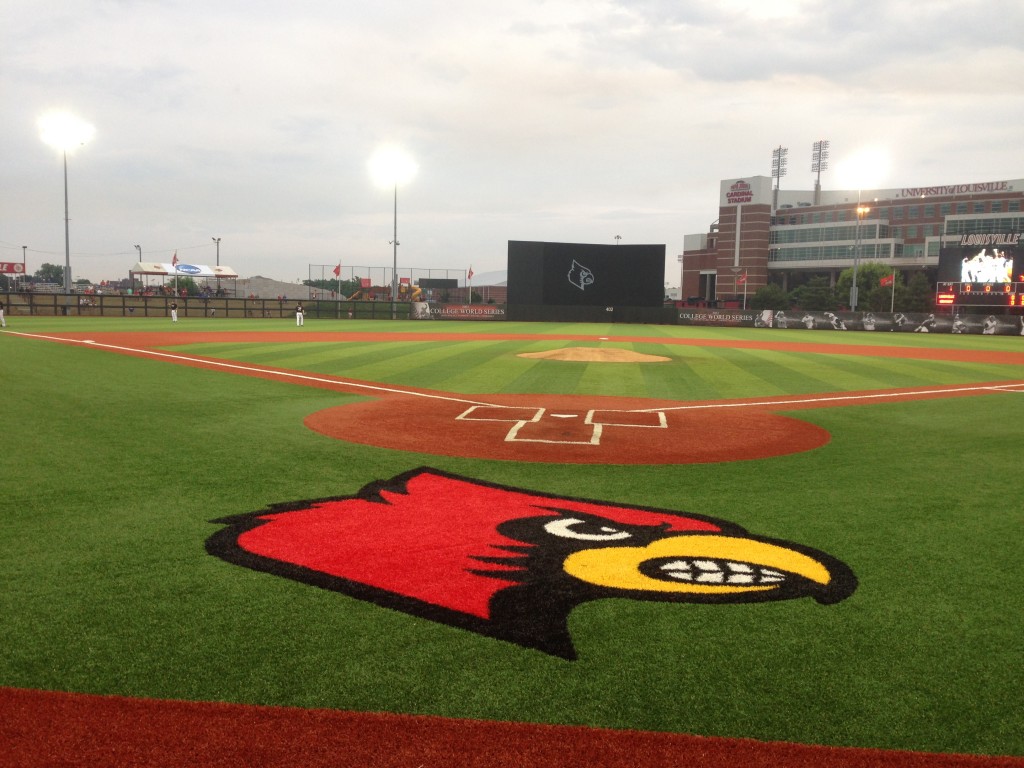 Louisville Baseball, the team that made their rise through College Baseball playing smallball, is now one win away from Omaha – again – because of it. It was all so poetic. It was all so ironic. While it was Freshman Nick Solak’s two run double that gave Louisville the 5-3 win over Kennesaw State – and we’ll get to that in second – he wouldn’t have been in that position without what happened first.

What his senior teammate delivered.

When Kyle Gibson laid down the suicide squeeze bunt to tie Louisville and Kennesaw State in the 8th,  his coach had little doubt that he’d make the most of it. That’s Louisville Baseball through and through.

“We practice that every day,” Solak noted. “Right before it he [Dan McDonnell] came up to me and told me I was the best player on the team.”

“Trust is another thing we talk about here,” Head Coach Dan McDonnell explained. “I told these kids a few weeks ago, ‘I’m pushing all my chips in and we’re gonna play how we play’. This is how who we are, if your better than us, I can live with that. But I just don’t wanna go down without playing how we play.”

And that they did.

Through an RBI single that gave Louisville a 1-0 in the third, a run that they got because Catcher Kyle Gibson worked a count, saw seven pitches and was eventually hit by a pitch. An RBI from Alex Chittenden, whose clutch hit allowed the Cardinals to only trail by one heading to the 8th.

Through strong pitching from Kyle Funkhouser, whom even when giving up runs in back-to-back innings, displayed leadership beyond his years, stopping the bleeding and allowing the Cardinals the chance the comeback. Or from Closer Nick Burdi, the overpowering pitcher, who came in to shut the door on the Owls allowing only one hit in the ninth.

The Cardinals firmly played their way and displayed who they were – and that’s pretty good.

Now the Cardinals are one win away from back-to-back College World Series appearances. Yes, that’s the Louisville Cardinals. The team that had just one postseason appearance a short seven years ago.

As for DH Nick Solak, the actual guy who hit the clutch hit that gave the Cardinals the 5-3 victory, he may have broke conventional ways.

If you were selling Louisville as a College World Series Champion. First you’d talk about their strong pitching but second you’d talk about their experience. A junior, senior leaden group that has played on the big stage and won there. But on this night, it was a hit from a guy who had never been there – Freshman Nick Solak.

Solak had went 3 of 5 on the night, but it was his bases clearing double to right field in the bottom of the 8th that gave the Cardinals a 5-3 lead, sending a record crowd of 5,351 at Jim Patterson stadium home happy. It also exercised a few demons, removing the stench of leaving 9 runners stranded in the innings before.

“Between the RBI and Gibby [Kyle Gibson] getting the bunt down. Everyone takes a step back. They can breathe more and everything comes a little bit easier,” Solak said. “I’m just trying to have fun out here. Ever since I’ve been here, I’ve laid in bed and watched videos of dogpiles and guys going to Omaha. It’s something you dream about. It’s cool to get that opportunity to come up big for the team.”

His teammate, a second round draft pick by the Minnesota Twins, Nick Burdi was hardly surprised to see a Freshmen come up big.

“These guys aren’t freshmen. They were freshmen in the fall. It’s a special group,” Burdi said. “They remind me a lot of my freshmen group. To see guys step up like this – it’s just an honor. You know that when we leave, the tradition of the Louisville Baseball program is gonna carry on. It’s hard to explain. It’s just something that we breathe, eat, and sleep every day: To come up in these big moments. I’m happy for him.”

Louisville now find themselves one win away from back-to-back College World Series. One win tomorrow night at 7:30pm over team in Kennesaw State that was probably was a lot like them just five short years ago: Getting the first taste of glory and the big stage. Now Louisville is here, one win away from taking a step that will add even more to the unspeakable cultural shift taking place for Louisville Baseball.

However it won’t be easy.

Kennesaw State second basemen, Cornell Nixon warned the Cardinals of that post game saying that “We’ll be back tomorrow. We don’t lose twice,”

When Louisville Senior Kyle Gibson heard the news, he chuckled and simply stated, “We’ll be back, too.”

Expect tomorrow evening to be nothing short of a twelve round title fight.