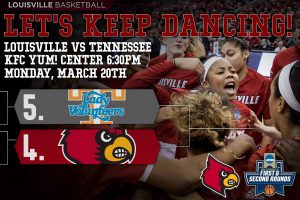 ALL of #cardnation report to the Yum! Center for another 2013 NCAA rematch Monday night. The men aren’t dancing but I’d be willing to bet they’ll be in the stands cheering on their fellow student athletes in the Big Dance.  Get downtown. Take the fam and cheer on the Cards for a chance to advance to the Sweet 16 in OKC next weekend.

Louisville has played in its home venue for the first and seconds rounds of the 2013 and 2016 Tournaments and in the 2014 Regional.

3 players will be on the floor at the same time who rank in ESPNW’s Top 25 players in the nation, down at the KFC Yum! Center on Monday evening.

The talent is immense as DeShields demonstrated during her freshman year at North Carolina in 2014 when she averaged 18 PPG and lifted the Tar Heels to the Elite Eight. It wasn’t as evident during a rocky first season in Knoxville. DeShields shot just 29.4 percent from 3-point range, had 33 more turnovers than assists, and even came off the bench 16 times. Ultimately, DeShields ended up being the leading scorer on another Elite Eight team. Few players can create their own shot in as many ways as DeShields can. — Charlie Creme

See all that space around the lane? Hines-Allen owns it. From a good freshman campaign to a sophomore effort that earned her ACC player of the year, Hines-Allen demonstrated a mastery of the paint. She can post up with her back to the basket when needed or face up and shoot from the elbow when challenged. But what sets her apart is the ease with which she reads space and cuts or drives to the basket. Half court or transition, she gets to where she’s going. — Graham Hays

Voted Preseason ACC Player of the year, she had 15 double doubles this season.

Most players would love a sophomore campaign as productive as Moore’s a season ago, but she happened to compile it in the shadow of teammate Myisha Hines-Allen’s breakthrough effort that earned her ACC Player of the Year. Moore is still very much a headliner on the banks of the Ohio River. While listed as a forward, Louisville’s leader in assists and 3-pointers last season is more than anything a playmaker comfortable with the ball in her hands. — Graham Hays

Or at the box office!