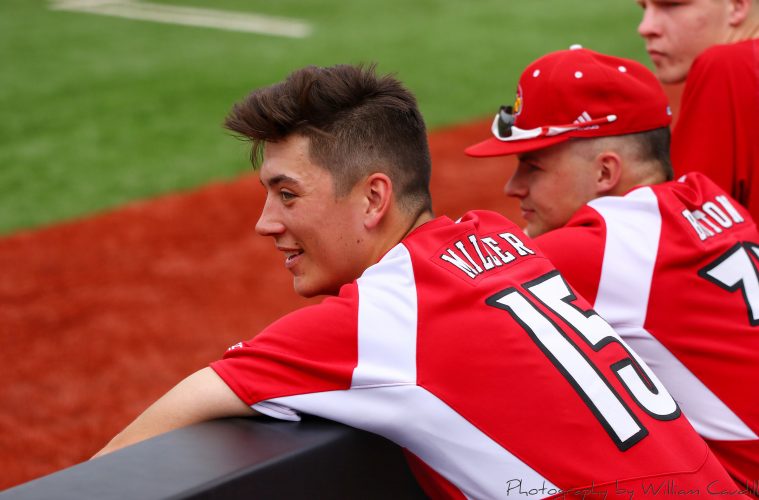 For the second half of the pair of midweek games, the #28 Louisville Cardinals took on the the Cincinnati Bearcats and throttled them to the tune of 24-6 on Cancer Awareness Night. Their 24 runs was the first time they had plated twenty or more runs since March 1st, 2017 vs. Morehead State (20), and was the most runs scored in a game since May 1st, 2010 vs. Rutgers (24). Junior Devin Mann’s 5 runs scored were the first time a Cardinal did so since Adam Duvall scored 5 runs on May 5th, 2009 against Ohio State. The game had originally been scheduled for March 27th, but had to be postponed due to inclement weather.

It was anything but a pitcher’s duel today at Jim Patterson Stadium, with both teams plating 3 runs in the very first inning. Starting pitcher junior Riley Thompson would give up a hit and 3 walks to allow UC’s 3 runs, then with the bases loaded in the bottom of the first, sophomore first baseman Logan Wyatt would walk, junior outfielder Josh Stowers would get HBP, then freshman outfielder Drew Campbell would hit a bloop single to left field. After the first inning madness was over, Thompson’s day on the mound would be done and junior righty Bryan Hoeing would make his way to the diamond.

The Cardinal Nine would follow up their three spot in the first with another three spot in the second. With sophomore shortstop Tyler Fitzgerald on second and sophomore third baseman Justin Lavey on third, both runner would advance on a balk and break the tie. An RBI double from junior second baseman Devin would bring home another run, and then he would come all the way home on a throwing error to make it 6-3 after just 2 innings.

Once Hoeing had entered the game, the Louisville pitching staff would get some much needed quality innings. He would put up 5.0 no hit innings of relief and strikeout 3 batters. While he was blanking the Bearcats, Louisville added an insurance run in the fifth inning thanks a solo shot from Devin Mann, his third home run of the season and his first since February 25th.

Mann would bring home yet another run in the sixth inning, when he would walk with the bases loaded. Following that up, Josh Stowers would smack a 2 RBI single to left field, and then backup catcher Zach Britton would log the Cards’ third HBP of the game make it an 11-4 game through the middle innings.

Though Louisville was not done taking their foot off the gas, and they would take advantage of an absolute collapse on the mound by UC. In the seventh inning alone, they would draw 5 walks, 2 HBPs and and drive in 4 base hits to plate a whopping nine runs. By the time UC would tally their first run since the first inning with a solo shot in the eighth, Louisville had plated 20 runs in a row.

Following a scoreless seventh inning tossed by sophomore Michael McAvene, UC tried making the game interesting by plating 3 runs off freshman Michael Kirian in the eighth. Though the lead would prove to be insurmountable as Louisville would score 4 more runs in the bottom of the eighth. Junior southpaw J.D. Mundt would get the first two outs of the ninth, and senior Mac Welsh would make his first career appearance and record the final out of the game.