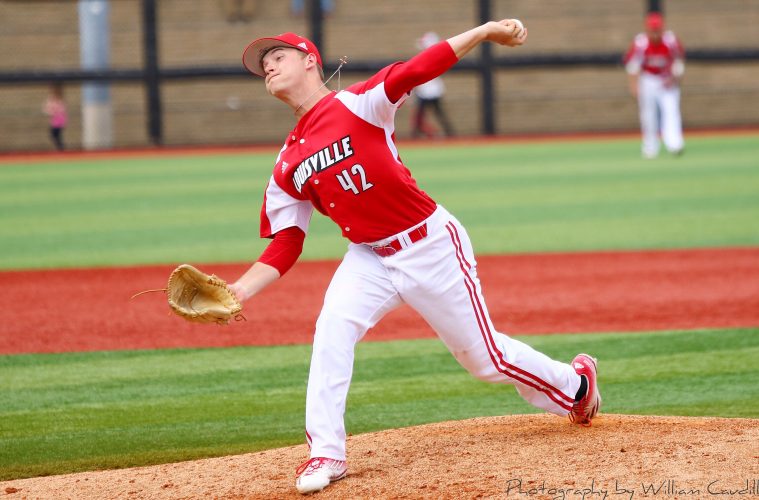 Utilizing a staff day like they had in their prior game in Bowling Green, the #24 Louisville Cardinals (27-13) took down the Western Kentucky Hilltoppers (19-21) yet again, this time at Jim Patterson Stadium by a score of 5-4 to win the 2 game series. The victory for the Cards kept them undefeated on the season in midweek games against unranked opponents.

By the time the first inning was in the books, 44 minutes had passed and both teams plated 3 runs on 2 hits. WKU forced Louisville to make two pitching changes in the top of the first, while junior outfielder Josh Stowers drove in two runs on top of stealing two bases. Once he made it all the way to third bases, a wild pitch would bring him home and tie up the ball game. Once the early innings were done after an hour and a half, Louisville had taken a 4-3 advantage. Drawing a leadoff walk in the third, Stowers would advance all the way to third before a base hit from sophomore third baseman Justin Lavey would send him home.

Seeing action after being the third Louisville pitcher inserted into the game, junior right-hander Bryan Hoeing gave the Cards’ pitching staff some much needed quality innings. Even though he would not log a strikeout, he would still pitch 4.2 innings without an earned run. However, a throwing error on his behalf would allow a runner on first to advance all the way home and make it a 4-4 ball game in to top of the fifth. The Cardinal Nine had no trouble responding though, as a sacrifice fly from freshman Lucas Dunn would give the Cards the lead yet again.

Once Louisville took the lead in the fifth, the bullpen did its job to make sure that lead stuck. Senior lefty Rabon Martin, grad transfer righty Austin Conway, and sophomore right-handers Michael McAvene & Shay Smiddy would all combine for 3 scoreless innings, with Smiddy striking out both batters faced in the 8th inning. Smiddy came back in the ninth inning, where he struck out two batters and registered his second save of the season.