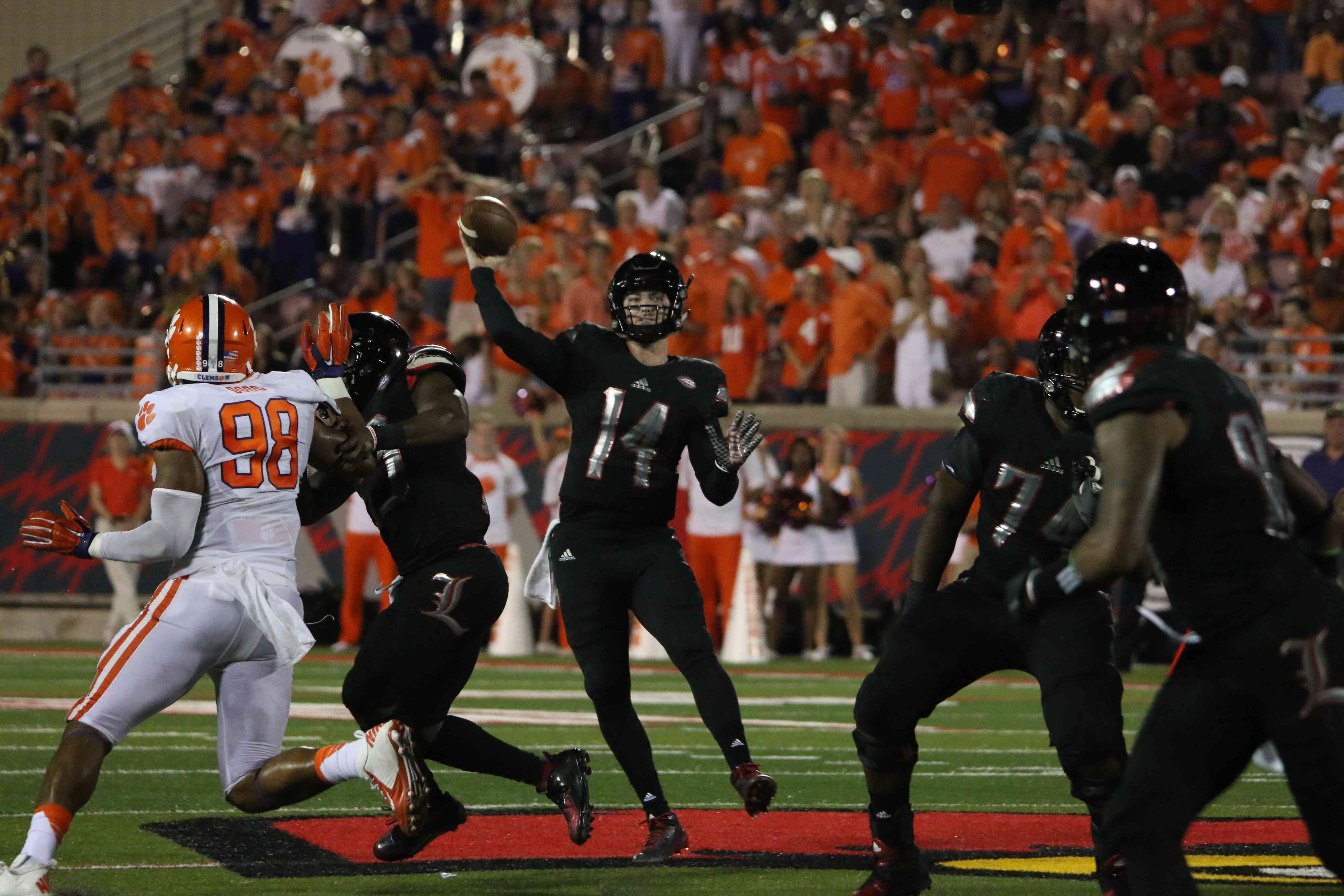 Louisville has lost three games by a total of 13 points. The losses to the sixth and 11th ranked teams and a good Houston squad. Thats the problem close isn’t good enough.

Louisville (0-3) is not use to this under Bobby Petrino. Before he returned for his second stint as Louisville, Petrino lost one home game in November 15, 2003. The Cardinals have lost two in five days.

“I don’t think I’ve ever been 0-3,” said Petrino. “Thats another tough loss for us. We’re not very good on offense. We have a hard time running the ball.”

Louisville was better Thursday night, but not good enough. The Cardinals rushed for all of 19 yards on 28 carries. That includes minus 37 yards in quarterback losses.

“Its very hard right now,” said quarterback Kyle Bolin. “This one hurts. Hats off to Clemson.”
Bolin was effecient on 19 of 34 passes for 238 yards. He was intercepted twice. “Honestly, I made plays,” said Bolin.  “I made mistakes I wish I could take back.”

The positive thing about 0-3 is the Cardinals have played a tough early schedule with a lot of freshman getting playing time, especially on offense.

“We’ve got to get experience with our offensive line. We got to work as a unit,” said Bolin. “I’m proud of our young guys, they fought their butts off.”

The Cardinals got the ball back with 6:34 to play and drove to the Clemson 21. The key plays were a pass of 15 yards from freshman Lamar Jackson to L.J. Scott and a Bolin to Treveon Samuel of 14 yards.  Wallace lined up to kick a 38 yard field goal. One of the best field goal kickers Louisville has had (53 of 69 in four seasons. He was 22 of 24 going into the season from 30-39 yards. He missed wide left.

“You’ve got to tell him to keep his head up,” said senior Sheldon Rankins. “Thats just part of kicking. Either you make it or you don’t. Its going to get blown up.”

Louisville’s season is on the verge of blowing up.

Likes…………
-Kyle Bolin’s 55 yard pass to Jaylen Smith gave Louisville a first down at the Clemson 15.
-Traveon Samuel’s 100 yard kickoff return with 9:41 to play getting Louisville with in three points.
-Micky Crum’s four catches for 36 yards, one where he caught the ball over the middle with time running out for a 16 yard gain. Crum used his head running out of bounds when he saw he couldn’t score.
-Louisville’s defense held covited Clemson quarterback Deshaun Watson 12 carries for 54 yards. However he was 21 of 30 for 199 yards passing with two interceptions.
-The stadium was rocking Thursday night. The third largest crowd in Papa John’s Cardinal Stadium history 55,336. Clemson had a couple of five yard penalties maybe because of crowd noise.
-James Burgess’ interception on a Deshaun Watson pass giving the Cardinals a first down at their own 34.

-Cardinals could muster only four yards and get a five yard penalty before the field goal.
-John Wallace, usually a reliable kicker misses from 38 yards, wide left that could have tied the game with 2:28 to play.
-Josh Appleby punted six times in the first-half for a 37 yard average, four in the first quarter.