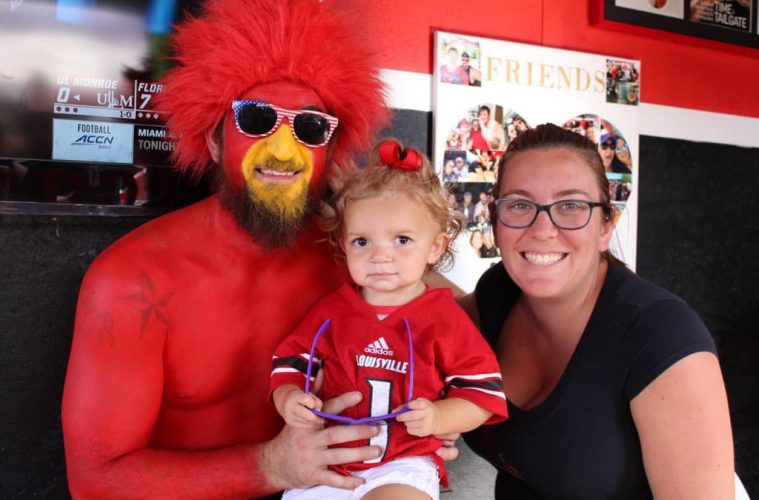 People of the Ville: The Redbird (Family)

Were you as active of a UofL fan when in high school?
Was not painting up for Cards games while in HS, started in 2008-09-ish at Freedom Hall. Got tickets to a game and sat behind guys that had their faces painted, it was a student section/group called L-Raisers, a guy invited me to come back to a game and join the group because of how loud I was cheering so loud. So I showed up painted up from my chest up & everyone thought it was cool so I continued to do it.

Were you with Courtney (Mrs. Redbird) at the time?
No, she had started UofL later, I think it was 2010 and we re-met through family and we got together and she came to a game with to tailgate a football game bc she was a freshman and we were tailgating in the green lot and she was there and she invited me by her tailgate and she in now the one who still paints me up… Before her I would do it the best I could and then a buddy would help me out.

So were you both students?
I was not, but alot of my/our friends went there.

So you and Courntey have been together for a while.. You’ve now welcomed a baby bird into the family…
She (Kendall) came along in November of 2017. We have not painted her up yet but she does have a little wig, Cards onsies and bedazzled (or whatever) Cards clothes.

So people recognize you without being painted up?
Yeah, which is kind of weird. But I would say more so in the last year and a half that we’ve made it out to some basketball, soccer and softball games where we don’t have time, are coming from work or running out of paint because we used it all during football or its raining…

How long is the painting up process to get ready for a game?
I can do my face in about 3-4 minutes and then maybe 35-40 minutes total. But I cant do my body till I get to the stadium/arena because of the commute and not wanting to get paint all over any vehicles. If i paint up for basketball I usually just do my face (winter sport lol).

How much attention do you get because of it? TV time and photos with fans wise?
It comes and goes… depends on how the seasons are going… like last year in football they didn’t really put anyone on TV. But pictures with fans.. it could be people I know and then their kids or it could be people I’ve seen in my sections. And people who see me, they give me shoutouts. The first time I saw that ESPN commercial I was like ‘holy crap that was me’ and I had to rewind it and I got cold chills. I think its cool because Im just a roudy fan getting loud, I’ve seen plenty of people out there who I know who’ve been on TV but I think it’s cool to be recognized as a rowdy Louisville fan.

What are some of the best games you’ve attended?
I knew this was coming up! Gosh….
Ok well, its one of my top ever trips and games I’ve been to.. Has to be the Sugar Bowl in New Orleans. It was a bucket list trip. As soon as I learned we would be playing there I ran to get tickets and what I needed to make it happen. We were not predicted to win or even be close. It was just a must-do event for me.
The Mississippi Monsoon – Football game at Southern Miss. (9/30/2012) It was pouring rain.. Senorise Perry ran the heck out of the ball (22 carries 118 yards, 2 TDs). One of the last few plays of the game he ran the ball up the middle and it sealed the win.
We went to Cinci when Russ Smith hit the last second shot to win. (2/22/2014)
Tournament in Indy, when we lost to Michigan State in 2009. I had alot of friends from the neighborhood that I went with on that trip which made it fun.

What do you hope Baby Bird picks up from you in her fandom?
If I could pass anything on it would be to be passionate about the sports, go out and support them. I know I’m not the best on social media sometimes…. fans can get frustrated sometimes but go to games, have fun, get there early and stay late and cheer for the teams, be loud!!