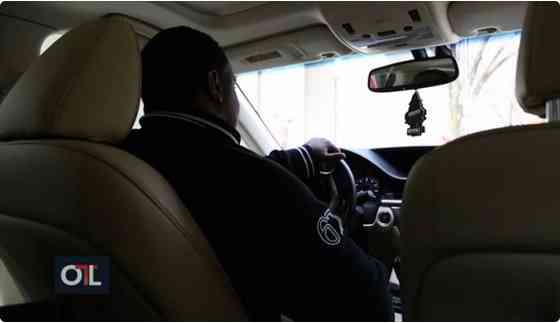 On Sunday morning at 10:00 a.m. Outside the Lines will run a “Refresh” of its report of Louisville Basketball, Andre McGee & Katina Powell.  ESPN’s John Barr was in Louisville on Monday interviewing Katina Powell (as did the NCAA in a follow-up interview) and also did a stand-up outside of UofL Athletic Dorm Billy Minardi Hall.  ESPN’s Dana O’Neil also reported on Thursday that Louisville Basketball coach Rick Pitino is finally slated to speak with NCAA investigators next month.

John Barr with an ESPN camera crew managed to get into McGee’s car and asked Andre to comment.  McGee then directed Barr and his crew to get out of his vehicle.  John Barr then implored to Andre that this was his ‘chance’ (as if no one else will take his interview). McGee then said that he didn’t want to talk, Barr said that was a bad idea and then Andre asked Barr & crew to exit.

If there is more to the conversation between Andre McGee & ESPN the network didn’t preview that.

Whatever buzz is generated is sure to be snuffed out by the Conference Championship games and the NCAA Tournament Selection Show.  We’ll see if there is anything substantial and if you must insist on watching the ambush from John Barr & ESPN you can watch it here on , I mean ESPN.