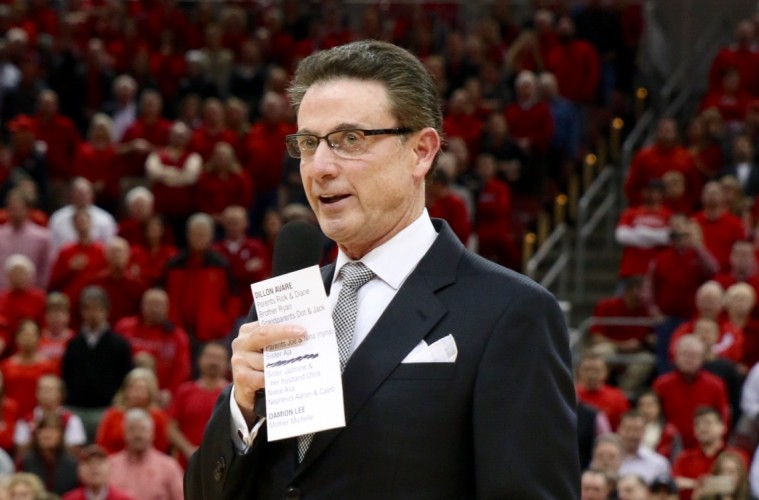 Rick Pitino is back in the blogging business again and with this edition the Louisville Basketball coach is talking about his player’s personalities.  The entire entry is below but you can read it directly on RickPitino.net HERE:

Every year I’ve been in this business, I find something different and unusual. The past two years have been quite unique, almost surreal. How so? In this day and age of over-recognition of one’s self, it’s so refreshing to witness the behavior of this current group of Cardinals. Damion and Trey were good leaders of how caring teammates act. Although our players often get dissected on the court, let’s take a look into their personalities:

Mangok Mathiang – Upbeat, outgoing personality. Always talking, but in a positive way. Builds the guys up and never tears them down. Tough player who won’t back down. Can get his feelings hurt if he feels you don’t totally believe in his abilities. The vocal leader and heart of the team.

Quentin Snider – Speak softly but carry a big stick. He won’t say a lot, just gives you 100% each day, every day. Will go toe-to-toe with anyone as long as he believes you have confidence in him. The leader on the court by actions, not by voice.

Anas Mahmoud – Not sure what makes him tick. All of the coaches are puzzled by him. Really intelligent with a low-maintenance personality. Motivation is broken up into two components: motive and action. Sometimes foreign players have different cultures and it takes time to find the secrets of what motivates them. Soft spoken, caring person who gets along with everyone. All of us are in search of the answer that will get him to understand the enormous potential he has to be special. May have to send David Padgett to Eqypt to find the answer (only kidding of course!).

Matz Stockman – Like Anas, he is sometimes tough to figure out, but has the same special qualities that make him a great teammate. It’s easy to root for both Anas and Matz because it’s never about them. The team comes first. Matz is from a background where basketball is not really important. The interest in basketball here must seem so foreign to him. Will talk to himself and mutter Norwegian sayings under his breath. Not sure who it’s directed at and Matz won’t tell us. Another terrific person.

David Levitch – He gets the joke and the guys understand him as well as anyone. Very confident and understands all the motivational ploys coaches use in motivating players. His confidence allows him to be put into difficult situations. He was hoping to be a possible horse trainer. After experiencing the 4:30 am wake up calls this summer and cleaning up stalls, I believe D Lev will take his talents elsewhere.

Jaylen Johnson – Fun-loving and highly motivated athlete. Wants to make it badly, but not for himself. His motive is simple: help his mom and siblings have a good life. He finally discovered the right way to train and eat. Wants affirmation of what he’s doing and for the first time, it’s easy to give it to him. He also possesses a toughness that will not let him back down from a challenge. Should be interesting to see if his new training methods will stay consistent. If so, he will find success.

Ray Spalding – The clown prince of the team. Quiet and sometimes shy around adults, but with his teammates, that’s another story. Doesn’t know the coaches realize that he pokes fun at us. Just another special young man who cares about team first. He enjoys the moment, but is not overly concerned about the future. Enjoys where he’s at in life and that’s refreshing. Has an even keel and is very polite. The term southern gentleman applies to him. That comment alone will have him poked fun of this week.

Deng Adel – Very, very motivated young man. Motive and action are evident in this young man every day. Like Kyle Kuric, he is very easy to coach. Very serious about making it and possesses a willingness to learn and improve each day. He is a focused and caring young man. Close with his fellow Aussie Mangok, but is much quieter.

Donovan Mitchell – He’s not the everyday college athlete. Selfless, caring and carries himself as if he’s had etiquette training for years. Highly motivated young man. I will say he will leave the Ville someday as one of the most admired and beloved athletes. All in for the team and our University. Another incredible teammate.

Ryan McMahon – Polite and confident. Intelligent and another one that cares about his teammates more than himself. His role on the team has yet to be determined, so his personality on the court has yet to surface. Another quality young man.

V.J. King – Very similar to Donovan and Deng. Really cares about the team. Hard working and dedicated to achieving excellence. Thoughtful and respectful.

Tony Hicks – Just getting to know him. Seems highly motivated and intelligent. Will get to know him better when official practices start.

Dwayne Sutton – Like Tony Hicks, he’s only been with us for a month. Extremely hard working. Look forward to getting to know him.

This is a little insight into what makes these caring young men tick. In my 40+ years, I haven’t come across young men so caring and concerned for each other. The answer how they became such quality people is obvious for us as coaches. It’s simple: wonderful, loving parenting, the best I’ve ever witnessed. They are easy to root for, Card fans. They are special young men.