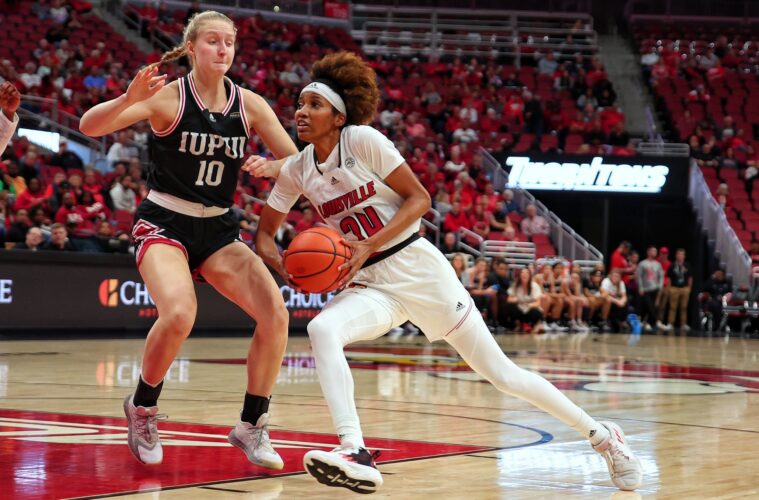 Louisville hosted IUPUI for their second game of the season tonight and secured an 84-62 victory to remain undefeated.

When you talk about bringing in transfers you always want them to be immediate impact players. Sometimes that works out and sometimes it fizzles like my hope for getting Rand Paul out of office. One thing Louisville has had good luck with in past years is transfer players, and that is no different this year. When the news came out that Morgan Jones was being added to the roster, I had immediate flashbacks to her dropping 28 points on Louisville in last year’s game against Florida State. I’ve never been so thankful to have someone on our side. In tonight’s game against IUPUI she made it obvious that she had been working even harder in the off season. Finishing the first half with 8 points and 6 rebounds she was playing like it was the Sweet Sixteen and they were headed for overtime. She played hard for all 19 of her minutes and finished the night with 9 points, 7 boards, and 2 steals. That’s when I knew this was one transfer that wouldn’t fizzle out.

Morgan wasn’t the only one playing with a toughness. Olivia Cochran was creeping up on a double-double by the end of the first half with 11 points and 6 boards but had racked up 4 fouls before the end of the third quarter. The combo of Olivia and Liz Dixon on the floor is going to cause a lot of problems for opponents this year and I am 100% here for it.  Speaking of Liz Dixon, please believe me when I say that no one is prepared for the year she is going to have. She reminds me of Mykasa Robinson in a way that her stat line doesn’t always reflect what she brings to the court. She finished the night with 6 points and 3 rebounds but her leadership on the floor is what will help this team play to their full potential.

Chrislynn (CC) Carr is another transfer who has been an immediate impact for this team. She stepped on the floor tonight and gave us 3 three-pointers with a beautiful high arch and a total of 15 points, along with 4 rebounds, 5 assists, and 1 steal. She’s feisty and I truly believe she will leave Louisville as an all-time favorite.

Overall, I liked what I saw from this Louisville team tonight. They played tough and played with a focus. With anything though, there is always room for improvement. Morgan Jones and Hailey Van Lith have a similar game play and need to learn to play off one another. I don’t see this being a long-term issue but more of a small kink to work out. That being said, HVL still walked away with a double-double tonight. 12 points and 10 boards. Something else I am sure Coach Walz will work on prior to the next game are the sloppy turnovers. While the turnover number wasn’t terribly high (13), some of them were mistakes that will lose games against any tougher opponent.

The Cards travel to Nashville this weekend to face Belmont on Sunday at 5pm. (EST) You can find the game on ESPN+ and on 93.9 The Ville.